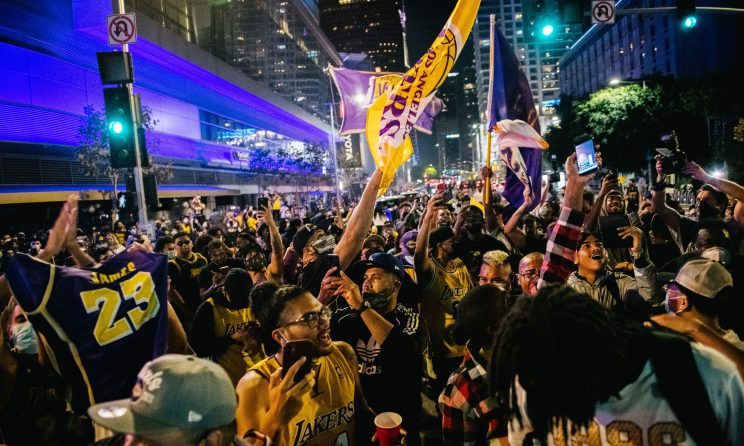 COVID-19 cases have spiked in the Los Angeles area in recent weeks, and county health officials think the Lakers are partly to blame.

The Los Angeles County Department of Health told USA Today on Monday that it is “highly likely” watch parties and celebrations that followed the Lakers’ NBA Finals win contributed to a recent spike in cases in the county.

The Lakers closed out their NBA Finals series with the Miami Heat on Oct. 11 at Walt Disney World in Florida, which marked their 17th championship.

“It is impossible to determine the exact exposures that contributed to this increase,’’ the department said in a statement to USA Today. “However, it is highly likely that gatherings to watch and/or celebrate the Lakers, along with any other gatherings that occurred 2-3 weeks ago where people weren’t wearing face coverings and were in close contact with each other, contributed to the rise in LA County cases.’’

And with the Dodgers just a single game away from winning the World Series — they lead the Tampa Bay Rays 3-2 in that series ahead of Tuesday night’s Game 6 — officials are worried that spike may continue.

“As fans continue to watch and celebrate the mighty LA sport teams, we are mindful that if individuals are not adhering to the health officer order requirements of distancing, infection control and masking, cases will continue to rise which, unfortunately, not only leads to increased illness and death, but also slows down our recovery journey,” the department said in a statement to USA Today.

While Lakers celebrations might be partially to blame for the rise in cases in Los Angeles, the spike is far from unique.

Cases have been rising fast across the country.

There have been more than 8.7 million confirmed cases of the coronavirus in the United States as of Monday night, according to The New York Times, and nearly 226,000 deaths attributed to it. The country has averaged more than 69,000 new cases a day over the past week, an all-time record, and recorded more than 85,000 on Friday — which is also an all-time record.

Local health officials are worried about a similar trend related to the Dodgers’ World Series run, too. (Brandon Bell/Getty Images)