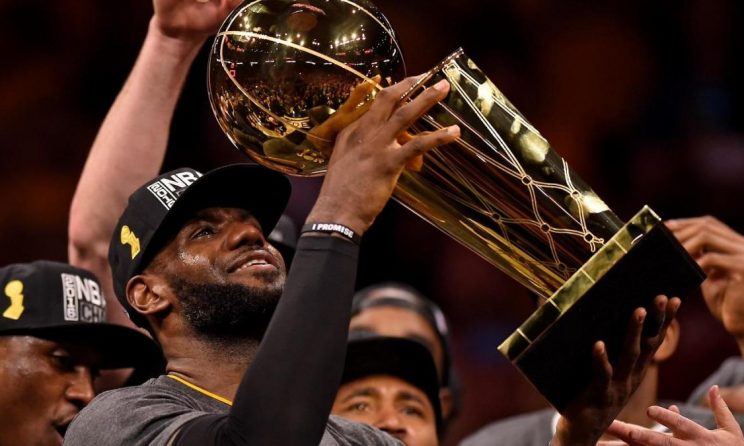 The three most notable quadrennial events are the Olympics, the World Cup and the U.S. Presidential Election. The last of those three ruins the consistency of something major in sports happening every four years, but there is an alternative thanks to the illustrious career of LeBron James.

James has accomplished so much throughout his 17 years in the NBA — along with his four years in high school where he first exploded onto the national stage — but some of the biggest highlights of his career have happened during election years, going back 20 years. So if you find yourself not wanting to think about elections during this presidential cycle — or perhaps the next — just tell yourself, “oh, it’s 2024. Another year where LeBron is going to do something cool,” which will release endorphins instead of anxiety over whatever existential threat faces the country then.

Here’s what LeBron has accomplished during election years.

Just over seven months before one of the most controversial elections in United States history, LeBron James was a freshman at Akron St. Vincent-St. Mary High School and already competing for a championship. In a 73-55 victory over Jamestown Greenview, James led all scorers (25 points on 10-of-12 shooting, 2 of 4 from three) to give his team the 2000 OHSAA Boys Basketball State Tournament Division III Championship.

In a draft class that produced one of the greatest crops of prospects in league history, LeBron James — who had already been anointed The Chosen One by Sports Illustrated — stood amount among studs such as Carmelo Anthony, Dwyane Wade, Chris Bosh and the immortal Darko Milicic to take home Rookie of the Year. A few months later, George W. Bush won a second term in office over John Kerry.

Four years removed from an abysmal result for our nation, and a presidential election, LeBron James and Team USA returned to the international stage with a vengeance with a squad that later became known as the “Redeem Team.” James averaged 15.5 points, 5.3 rebounds, 3.8 assists and 2.4 steals a game as the United States utterly dominated its way to a gold medal — with only Spain providing a real challenge against the team’s might. It was the first gold medal of his career as he finished second on the team in scoring, and led the team in blocks and steals. A few months later, America elected its first black president as Barack Obama defeated John McCain.

Nine years into LeBron’s career, the comparisons were being made with some of the best players in NBA history. The only thing most of them had that he didn’t, however, was an NBA title. James tried to rectify that with a move to Miami to create a Big Three with Wade and Bosh, but the Mavericks thwarted their first attempt at winning the championship in 2011, inspiring a litany jokes about LeBron’s lack of killer instinct, clutch gene, and his apparent fear of posting up the 5-foot-10-inch J.J. Barea. That team returned to the Finals a year later and beat the Thunder in five games to get James’ first title to which he victoriously proclaimed, “It’s about damn time.” President Obama won his re-election bid against Mitt Romney a few months later.

2016: A historic title for Cleveland

About five months before Donald Trump defeated Hillary Clinton, and after cruising to his sixth straight Finals appearance, LeBron had to put the Cleveland Cavaliers on his shoulders and come back from a then-unprecedented 3-1 series deficit against the Golden State Warriors. Not only were his stats absolutely bonkers (29.7 points, 11.3 rebounds, 8.9 assists, 2.6 steals and 2.3 blocks shooting 49.4% from the field), he also created arguably the greatest defensive play in NBA Finals history with his chase down block on Andre Iguodala. The title was the first in Cavaliers history and the first sports championship for Cleveland in more than 50 years. Here’s another incredible factoid, courtesy of ESPN Stats and Info.

All of this leads us to today. During another election year, James is just one win away from winning an NBA title for the first time with the Los Angeles Lakers. It would be an unprecedented accomplishment as he could potentially be the first player to win a Finals MVP with three different teams and also join an incredible pantheon of Lakers players who have brought a championship to Los Angeles.