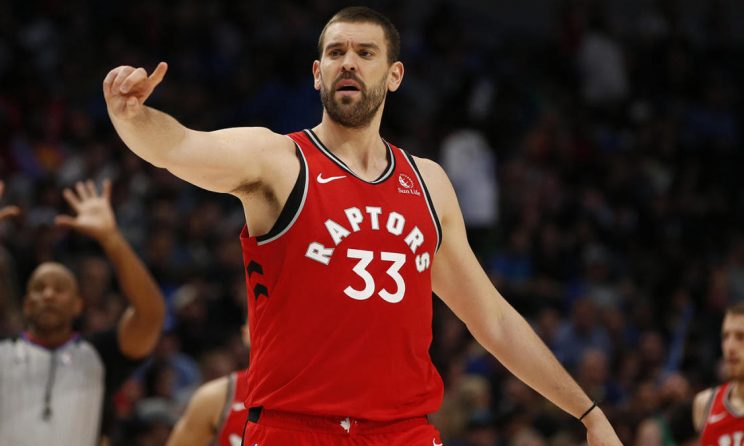 Marc Gasol will sign with the Los Angeles Lakers, according to ESPN’s Adrian Wojnarowski and Zach Lowe. The deal will last two seasons, and to facilitate Gasol’s presence, the Lakers will trade JaVale McGee to the Cleveland Cavaliers, according to Wojnarowski. The Lakers will receive Jordan Bell and Alfonzo McKinnie in that deal, but both have waivable non-guaranteed deals.

Gasol will presumably slot into McGee’s role as the starting center in Los Angeles. He should provide a meaningful upgrade in that role considering how well his skill set fits alongside LeBron James and Anthony Davis. Spacing was a serious problem in the starting five last season largely because of McGee. Gasol shot 38.5 percent from behind the arc last season. He is a stellar defender, and while he’s slipped a bit with age, that has largely related to mobility. Davis can cover him on that front. Gasol’s passing will mesh very well with James, who loves players with high basketball IQs.

Gasol was drafted by the Lakers in 2007. He never played a game in purple and gold, though, because he was dealt Memphis in exchange for his brother, Pau Gasol, to the Lakers. The Lakers could technically bring Pau back this season on a minimum deal, an idea he has expressed interest in. Pau won two championships in Los Angeles. Marc, on a two-year deal, will hope to replicate that feat.

The Raptors, meanwhile, have lost both of their top big men from last season to Los Angeles. Serge Ibaka is signing with the Clippers. Gasol is now a Laker. Toronto has stopped some of the bleeding by signing Aron Baynes, the best remaining big man on the market, to a two-year deal, but their status as the No. 2 seed in the Eastern Conference is in serious jeopardy.

Their loss is the Lakers’ gain. With Gasol in place alongside fellow offseason additions Dennis Schroder, Montrezl Harrell and Wesley Matthews Jr., the Lakers will enter the season as heavy favorites to defend their championship.