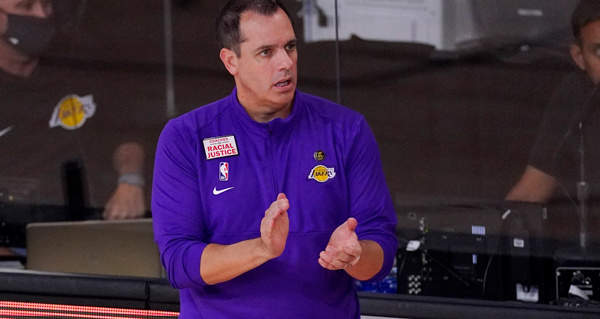 Frank Vogel was nearly fired as head coach of the Los Angeles Lakers, but he appears to be safe for now.

“There are no current plans” to replace Vogel, according to people with knowledge of the situation.

The Lakers defeated the Utah Jazz on Monday, which took him off the hot seat.

Rob Pelinka and Kurt Rambis met with Vogel and David Fizdale after last week’s loss to the Sacramento Kings. It was third time the group has met in recent days. Rambis then attended the Lakers’ pregame coaches meeting before the Utah game. Rambis advocated for the Lakers to use bigger lineups with Dwight Howard and DeAndre Jordan.

Vogel helped guide the Lakers to a title in his first season with the team, but he was only given a one-year extension before the start of this season.