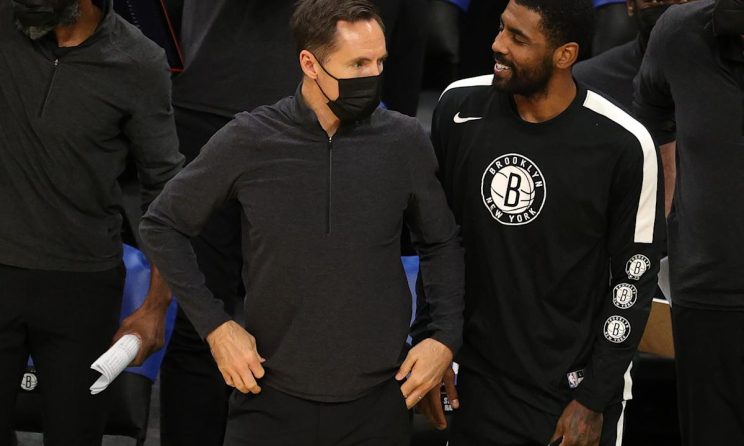 After he was barred from attending the team’s media day in person because of his status in violation of New York City’s COVID-19 vaccine requirement, the Nets guard missed practice on Tuesday for the same reason. He’ll presumably continue to do so as long as he’s in violation of the city’s protocols.

Head coach Steve Nash addressed Irving’s status after the team’s first practice of the season at its Brooklyn facility on Tuesday.

“I’m not really worried about anything,” Nash said, per ESPN’s Ohm Youngmisuk. “We’re just trying to work every day. We came in today and had a great practice and we’ll do the same tomorrow, and that’s kind of where I leave it.”

Asked if the team considered moving its practices outside of New York City, where Irving would be permitted to attend regardless of his vaccine status, Nash said no.

“No, this is our home,” Nash said. “This is where we’re going to practice and we have almost a whole group.”

Kyrie Irving is barred from Nets practices and home games because of his COVID-19 vaccine status. (Maddie Meyer/Getty Images)

Irving has repeatedly declined to address his vaccine status amid reports that he’s not vaccinated and social media likes and follows of conspiracy theories linking the COVID-19 vaccine to secret societies and satan. The NBA doesn’t mandate vaccines for players, but local regulations in New York City and San Francisco require that Nets, Knicks and Warriors players be vaccinated to gain access to indoor public gatherings, which includes practice and games.

Per an agreement between the NBA and the player’s union, Irving and any other player in violation of a municipality’s COVID-19 vaccine requirements will forfeit 1/91.6th of his salary for every game missed. For Irving, that adds up to $381,000 a game. If he were to miss all 41 of Brooklyn’s home games because of his vaccine status, that would add up to $15.6 million forfeited based on his $34.9 million salary.