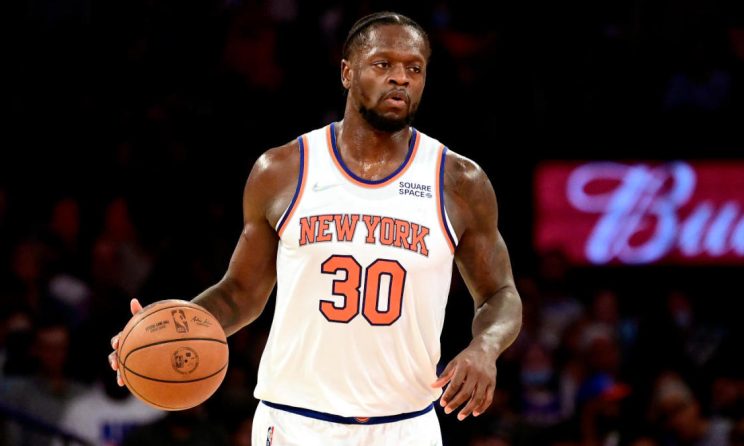 Chase Center hosts a cross-conference matchup on Thursday evening. The Golden State Warriors (41-14) welcome the New York Knicks, with Golden State entering on the second night of a back-to-back after losing to the Jazz on Wednesday. New York lists Quentin Grimes (knee), Nerlens Noel (knee), and Mitchell Robinson (calf) as questionable, with R.J. Barrett (ankle) as doubtful and Derrick Rose (ankle) as out. The Knicks are 24-31 overall this season, including a road record of 11-16. Draymond Green (back) and James Wiseman (knee) remain out for Golden State.

Tipoff is at 10 p.m. ET in San Francisco. Caesars Sportsbook lists Golden State as the 10-point home favorite, while the over-under, or total number of points Vegas thinks will be scored, is 218 in the latest Knicks vs. Warriors odds. Before making any Warriors vs. Knicks picks, be sure to see the NBA predictions and betting advice from SportsLine’s proven computer model.

The SportsLine Projection Model simulates every NBA game 10,000 times and has returned well over $10,000 in profit on its top-rated NBA picks over the past three-plus seasons. The model enters Week 17 of the 2021-22 NBA season on a stunning 65-36 roll on all top-rated NBA picks, returning almost $2,400. Anyone following it has seen huge returns.

Now, the model has set its sights on Warriors vs. Knicks, and just locked in its picks and NBA predictions. You can head to SportsLine now to see the model’s picks. Here are several NBA betting lines and trends for Knicks vs. Warriors:

Why the Knicks can cover

New York has the rest advantage in this game, with the Warriors on the second night of a back-to-back. Golden State is also No. 29 in the NBA in ball security, committing well over 15 turnovers per game. New York is holding opponents to 105.9 points per game, No. 8 in the NBA, and the Knicks are in the top eight of the league in field-goal percentage allowed (44.3 percent), 2-point percentage allowed (51.8 percent) and points in the paint allowed (42.3 per game).

On the other end, the Knicks secure 29.0 percent of available rebounds on the offensive glass, ranking in the top eight of the NBA. Those offensive rebounds lead to 14.6 second-chance points per game, a top-five mark, and New York makes 13.0 3-pointers per contest. The Knicks are also soundly above-average in free-throw creation (22.2 attempts per game and ball security (13.6 turnovers per game).

Why the Warriors can cover

The Warriors are very good on offense, scoring more than 1.1 points per possession and leading the NBA in 3-pointers and assist percentage. However, Golden State is even better on the defensive side, and this is a friendly matchup against New York. The Warriors lead the NBA in defensive rating, giving up fewer than 1.04 points per possession, and Golden State sits atop the league in field-goal percentage allowed and 3-point percentage allowed.

The Warriors are in the top seven of the NBA in 2-point shooting allowed, assists allowed, defensive rebound rate, turnover creation rate and steals per game, with an above-average mark in blocked shots per game. New York is below-average on offense, including the No. 27 mark in field-goal percentage. The Knicks are also in the bottom tier of the NBA in 2-point accuracy, free-throw accuracy and assists per game on the offensive side.

How to make Knicks vs. Warriors picks

SportsLine’s model is leaning under on the total, projecting 209 combined points. The model also says one side of the spread hits almost 70 percent of the time. You can only see the model’s pick at SportsLine.