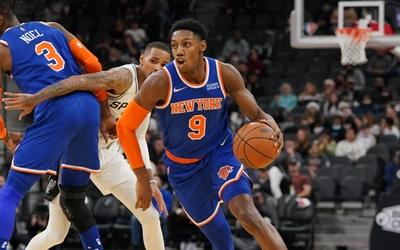 Add another Knicks player that has to miss Sunday’s game against the Milwaukee Bucks due to health and safety protocols.

The team announced on Saturday afternoon that forward Obi Toppin has been ruled out, and now they’re saying R.J. Barrett won’t be available for the same reason as well.

By entering the protocol, Toppin and Barrett must sit out a minimum of 10 days and record two negative COVID-19 tests at least 24 hours apart before they can return to action.

The third-year guard was cooking when the Knicks copped a win against the San Antonio Spurs, dropping 32 points on an 11-of-20 performance. However, the past two games saw Barrett hit a low percentage of his shots (10-for-his-last-28) and finishing with 19 points apiece in each contest — still solid production.

But what the Knicks will miss most is Barrett’s ability to guard anyone on the floor in this contest where a deep Bucks team can score with just about anyone at whim.

Losing a rotation player for any period of time is trouble for the Knicks, who are 12-14 and 12th in the Eastern Conference standings, but the timing is especially unfortunate with Toppin coming off the best game of his career, recording his first double-double with 19 points and 10 rebounds in Friday’s loss to Toronto.

Toppin has taken a step forward in his second pro season, as the former lottery pick out of Dayton has averaged 8.7 points and 3.9 rebounds in nearly 16 minutes per game.

The Knicks will take the floor without Toppin at noon on Sunday, when they host the Bucks.