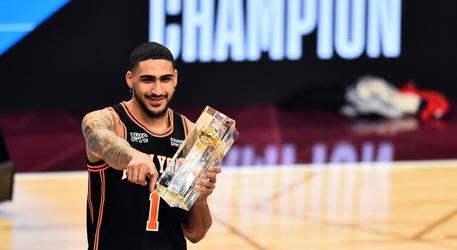 The NBA Slam Dunk trophy is coming back to New York.

Knicks forward Obi Toppin won the contest in a field of four as he defeated Golden State’s Juan Toscano-Anderson in the final round with a score of 47 to take home the title, avenging his runner-up finish from last year.

“It means a lot. As you all know, my dad right back here used to be a dunker so for me to win this, I knew I had to come back for my revenge from last year and I had fun doing it,” Toppin said. “And we had a lot of great dunkers here today, but I’m glad I came out with the W.”

Toppin struggled to get his dunk off in the first round, taking him three tries to get his behind-the-back, leaping-over-a-friend slam to connect. But despite his multiple attempts, Toppin led the way after the first round with a score of 44.

Orlando’s Cole Anthony started the festivities off by paying homage to his dad, former Knick Greg Anthony — who was at the event and had a hand in his son’s first dunk — by wearing his old Knicks No. 50 jersey and donning Timbs to complete his New York ensemble.

Anthony and Houston’s Jalen Green were eliminated after the first round.

It was an anticlimactic final round with Toppin sealing it after Toscano-Anderson, who put on the jersey of former Warrior and slam dunk champion Jason Richardson, was unable to connect on his final dunk and finished with a score of 30. Toppin capped the night off with a between-the-legs, one-handed slam.

The second-year pro out out of Dayton, Toppin, a Brooklyn-native, said it was special to win in the state of Ohio, his home away from home.

“I know there was a lot of Dayton fans in there, New York and Dayton fans. I appreciate y’all coming out,” he said. “Dayton fans, Ohio fans they’re amazing. They show a lot of love, definitely heard them today. It means a lot for me to do it on Ohio, for sure. This is like my second home.”

As for Toppin translating his contest dunks to regular season games?

“I’m gonna stick to the regular tomahawks,” he said, although he did leave the window of possibility open. “I might go in between the legs one more time. I might do something else, I might pull something special out. I might go behind my back or something on the fast break.”