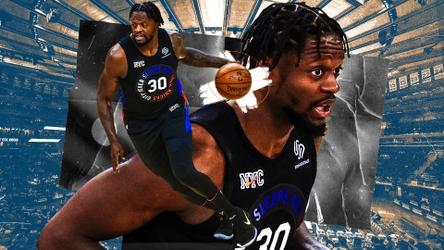 Julius Randle treated image, black jersey with two of him layered on top of MSG background

Julius Randle is back in New York, scrimmaging with his Knicks teammates ahead of training camp. The scrimmages are intense, he said. These aren’t the casual open-court runs that you often see on social media.

“That’s our thing,” Randle added. “We want to compete at the highest level.”

During a promotional tour for his partnership with Mobil 1, Randle spoke to SNY about title aspirations in New York, how the Knicks’ loss to Atlanta in the playoffs served as motivation, and why a “brolic” Mitchell Robinson will be a big piece for the team this year.

Below is an edited version of the Q&A with Randle:

Last year before training camp, not many expected the Knicks to make the playoffs. After making the postseason, making the All-Star team, and getting second-team All-NBA, does anything feel different about approaching this season?

RANDLE: My process, honestly, it stays the same. I try to keep the main focus, the main focus. And that’s, (taking) everything day by day. Whether it’s a workout, whether it’s a film, whatever it is, I just try to give everything that I can when I’m doing what I’m doing. And I kind of let the chips fall where they may. I trust the work and the process of everything that I’ve done. And I have faith and belief that that’s going to pay off. I know what I sacrifice, I know what I do to prepare. And regardless of success or failure, I try not to change. I don’t know what the expectation is (for our team). I can’t even tell you what to expect from me. I just know that I’m just gonna keep improving, getting better as a player. That’s just where I stand with it.

You’re here for at least the next five years now that you’ve signed an extension. Do you allow yourself to think – or dream – about what might come over that time span since you’ve talked openly about wanting to win a title in New York? Have you allowed yourself to think about how things might progress?

RANDLE: Obviously, it’s a process. Everything is a process. We’ve been building this from the ground up. But for me, personally, that is the expectation (winning a title in New York). That’s what I want to happen within that time frame. There’s a lot of things, factors that go into that. So obviously you’ve got to weigh that stuff in.

But as far as myself, I know Thibs (Knicks head coach Tom Thibodeau) is thinking (it as well), it’s just win at all costs. For me personally, that’s just how I prepare myself. I prepare myself to compete at the highest level of our game. Like I said, there’s a lot of factors (that go into winning an NBA title). But I trust Leon (Knicks president Leon Rose), I trust Thibs, Wes (Knicks vice president William Wesley), our coaches, Scott (Knicks GM Scott Perry) – all these guys, I trust. That was part of my process in thinking of signing the extension and that’s my goal, that’s our goal as a team and the guys that are around us. We want to be able to say that we won a championship here in New York. I don’t think there’s any better feeling than that.

Someone else who should be here for the next five years is RJ Barrett. What can you tell us about RJ as a player and teammate?

RANDLE: RJ’s going to be a really good player. What is he, 21? I don’t know how old he is. He’s young as hell (laughs). He’s a really good player, and I can relate as far as what he’s done, and what I’ve seen from him so far in this offseason is he just keeps improving. That’s really what it’s about.

You can tell the guys who really love the game and really dedicate themselves to their craft and he’s one of them. He’s going to keep improving. I think he’s going to have another big year and make a jump. And I’m excited, not only for him as an individual but for what he’s going to bring to our team. Because at the end of the day, that’s what it’s about. Our team success. And he’s going to look great because of that.

What’s the spirit like in the gym during these scrimmages before training camp?

RANDLE: It’s competitive, man, competitive. That’s our thing. We want to compete at the highest level. It’s guys just going after each other, competing. Obviously, you see they got me in the eye (Randle points to a butterfly bandage over his left eye). It was just competitive. Guys are showing up to work every day excited to (compete), so it’s fun.

How does Mitchell Robinson look?

RANDLE: Mitch looks good, man. Mitch is brolic; he’s big. You can tell that he took the weight room seriously. So Mitch looks good, and he’s one of those pieces that people don’t even really know that we had last year because he missed so much time. So he’s going to be a huge factor for us coming into this year, for sure.

I know you guys don’t really care about outside expectations, but no one outside of the organization last season thought you guys would win 41 games. What does the next step look like for this group heading into this season?

RANDLE: Just improvement, man. We established the culture that we wanted and established who we were as a team. We have to continue to get better as individuals and that will translate to us as a team. The expectation, I can’t really tell you yet. We haven’t even had our first practice, so I can’t really tell you. But I can tell you who we are as a team, and what we stand for, and what’s expected of each individual. That’s to work your ass off every day and to play defense.

Obviously Thibs is going to make sure that we’re going to play defense. There’s certain things as a team (that we know about) who we are and what we need to do night in, night out to give ourselves the best possible chance to win. We know what those things are. Everything else, we’ve just got to keep improving on and getting better.

Did you guys see the video clip Trae Young at the Garden with WWE? Do you care about that stuff?

RANDLE: Yeah I see it. But honestly, I don’t care. Obviously, that’s (for) entertainment purposes and all that (stuff), so I let people enjoy it. For me, honestly, I don’t care. I honestly didn’t even watch it. Knicks fans, they’re going to make a big deal out of it – they didn’t like it (laughs). But it’s all fun and games and hopefully they enjoyed it.

Recently, the NBA told teams that the Knicks and Nets will have to follow local ordinances and be vaccinated to play in home games. As a leader of the Knicks, do you talk to teammates about this? Do you think players missing games will be an issue?

RANDLE: I’m not sure if there’s going to be an issue or not. I haven’t thought about it. Everybody has their own preferences on what they should do or not, or what’s safe or not. And I get it, I understand it. I get both sides. Hopefully there’s a way that it won’t cause any issue and there’s a way that, if you’re a Knick fan, you can come to games and safely watch games. I think the biggest thing is just the safety. Whether you’re vaccinated or not, just taking all precautions to make sure whatever you’re doing, you’re doing it as safe as possible and not putting yourself at risk or other people around you at risk.

I don’t know how it’s going to go because we haven’t gone through it yet. But regardless, we’ll see, and hopefully it’s not too bad, and it’s a smooth transition. And us as players, we can play and enjoy the game we love, and Knicks fans can enjoy watching us.

Randle’s partnership with Mobile 1 is centered around a Behind the Drive idea that shows you what drives Randle. If you’ve followed Randle, you know that family is a driving factor for him. (Randle and his wife, Kendra, have a son, Kyden, and are expecting another child). Randle said that there are many things that motivate him. We asked whether the Knicks’ loss to Atlanta in the playoffs was a motivator for him in the offseason. He says it was and expressed confidence about his next postseason appearance with New York.

For the Mobil 1 campaign, Randle had sneakers designed by the artist Mache. There will also be opportunities for fans to win prizes as part of the campaign.