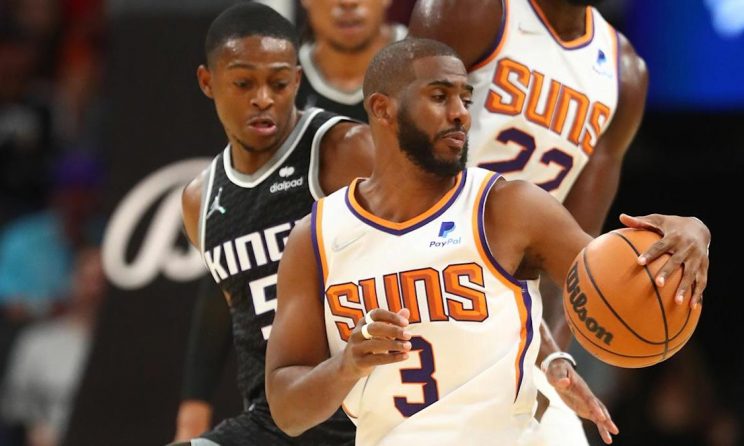 The Kings’ first three games of the season saw them line up against three of the NBA’s top 11 scorers from last season, and each shot well below their standard percentages.

Wednesday night provided another tough test, as Devin Booker and Chris Paul form one of the league’s top guard trios in the NBA. Rookie Davion Mitchell’s defensive intensity continues to rub off on his teammates, as the Suns’ star duo was held to a combined 13-38 shooting from the field, including Paul going just 1-10.

As the league continues to emphasize stopping players from drawing fouls with unnatural motion, Richaun Holmes makes a great play here to avoid running Paul over and inducing a turnover from the veteran guard.

Paul struggled to make shots against a variety of Kings defenders. Per NBA.com’s advanced player tracking data, Paul’s primary defensive matchup was De’Aaron Fox, who defended him for four minutes and 57 seconds of game action. Paul was 1-2 from the field in those matchups, and had one assist along with one turnover.

Tyrese Haliburton thrived in his matchups against Paul, holding him to 0-3 shooting and blocking one of the point guard’s shot attempts.

RELATED: Barnes saves Kings from another collapse at final buzzer

Holmes in particular seemed to be a problem for the Suns’ guards, as Paul shot 1-4 from the field in matchups with the big man. Booker also went 1-4 when attempting to score on Holmes.

Booker still managed to put up 31 points, as there are few players in the league who can fill it up the way the two-time All-Star can. Booker struggled to get easy looks, however, as he had three shots blocked by Kings defenders.

“This offseason, that’s where a lot of our focus was defensively, 1-on-1, 2-on-2, building that all the way up to 5-on-5,” Haliburton said after the win. “Just being able to guard defensively and get stops and I think what’s helped us in training camp going at each other every day having to guard each other and really getting after each other has helped us in these last four games and it’s going to continue to help us as we continue with the season.”

Luke Walton wants the Kings to win with defense, and the first two wins of the season certainly can be attributed to the effort on that end of the court. The Kings held Damian Lillard and C.J. McCollum to a combined 22-48 shooting in the season-opening win over the Portland Trail Blazers.

The Kings’ next game will offer a good chance to work out the kinks in their defensive sets, as the New Orleans Pelicans rank 28th in points per game and are 27th in offensive rating so far this season.