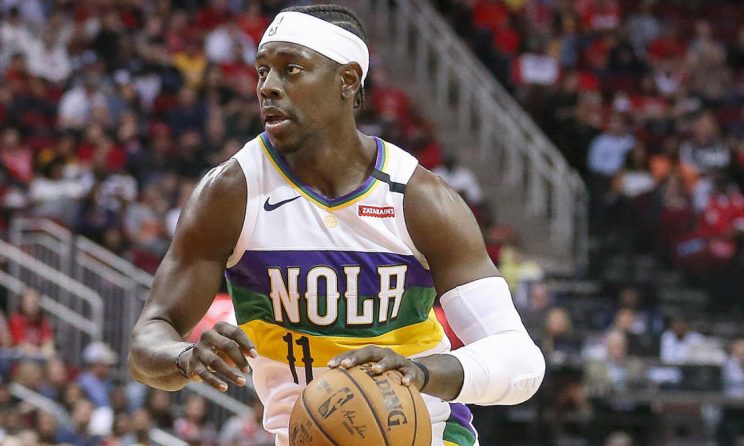 Add the Atlanta Hawks to the list of teams interested in New Orleans Pelicans guard Jrue Holiday. The Hawks have emerged as a potential destination for Holiday in multi-team trade scenarios that also include the sixth overall pick in the 2020 NBA Draft, which is owned by Atlanta, according to Marc Stein of The New York Times. Holiday has two years remaining on his current contract, including a player option worth over $26 million for the 2021-22 season.

Earlier this month it was reported that the Pelicans were openly discussing Holiday in trade talks and that several contending teams were interested. When asked about the report, Pelicans Executive Vice President of Basketball Operations David Griffin didn’t deny that the team was listening to offers for Holiday.

“That’s our job,” Griffin said. “We’ve done that since I got here. We’ve had similar conversations at last year’s trade deadline. No one is actively trying to do anything different than we were before. We’re trying to build a team that can be highly competitive today and build toward a sustainable future.

“If that means that Jrue is part of that, that’s special for us because he loves being with us and we love the way he plays. If the best way to build toward the future and the best way to put him in the best position to succeed is for him to be traded, that’s what ends up happening. But those things come about because you’re trying to build toward a sustainable future and Jrue is trying to put himself in the best position to win.”

This isn’t the first time Holiday’s name has popped up in trade talks as of late as the Nets and Pelicans reportedly discussed a trade involving Holiday prior to the trade deadline last season. The Denver Nuggets and Miami Heat also pursued Holiday last season. Those teams could all still have interest in acquiring the former All-Star. As an elite perimeter defender capable of playing both on and off the ball on the offensive end, Holiday’s skill set is an ideal fit for today’s game. As such, other contenders like the Los Angeles Lakers, Milwaukee Bucks, Philadelphia 76ers and Los Angeles Clippers could use a player of his ilk.

By trading Holiday, 30, the Pelicans would likely look to add younger pieces that align better with their team timeline as they continue to build around second year star Zion Williamson. Holiday, who averaged 19.1 points, 6.7 assists and 4.8 rebounds per game last season, still has a lot of good ball left in him, and he could ultimately prove to be a big boon to any team that is able to land him.