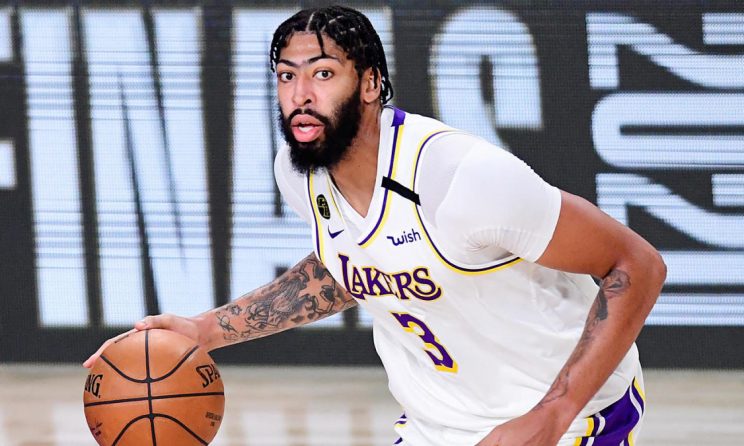 The biggest question hanging over the NBA right now is whether Giannis Antetokounmpo will sign his five-year, $228 million super-max extension with the Milwaukee Bucks before the Dec. 21 deadline. If that deadline passes and Giannis hasn’t yet put his name to paper, a collective scurrying will set about the league in preparation for Antetokoumnpo hitting the market next summer.

When a potential opportunity like this comes along, teams want to be ready to strike.

That means getting your finances in a flexible enough spot to make room for Giannis, if need be, on the fly. With that in mind, Anthony Davis, as we speak, has yet to sign an extension with the Lakers, which everyone figured was a formality. It still is in terms of Davis staying with the Lakers; he’s not going anywhere.

But that doesn’t mean he doesn’t want other superstars to come to the Lakers, or to at least make that possibility financially viable. Might Davis be keeping an eye on Antetokounmpo before he decides how to proceed with his own deal? ESPN insider Brian Windhorst recently suggested so, laying out the framework for how Davis could be waiting to structure his contract in a way that would make it possible for Giannis to sign with the Lakers next summer.

It goes like this: If Giannis doesn’t sign with the Bucks before the Dec. 21 deadline, Davis could then opt to sign a one-plus-one deal, which is to say a two-year deal with the second year being a player option. Davis could then opt out of that deal next summer, when it just so happens LeBron James is also eligible to opt out of his contract, creating enough salary space for Antetokounmpo to slide in before the Lakers subsequently re-sign Davis and James as an over-the-cap team using their Bird rights.

Should it ever get this far, adding Giannis would necessitate Davis and LeBron taking pay cuts (likely significant ones unless the Lakers were to completely gut the roster) to make the math work. At the very least, the Lakers would have to make other roster moves — which could include trading Kentavious Caldwell-Pope, renouncing Kyle Kuzma and/or Alex Caruso, and potentially moving off Marc Gasol and/or Montrezl Harrell, depending on whether either of those guys opts in for the second year of their deal.

It’s a lot of moving parts, but it’s technically doable. It’s a possibility. And the idea is that Davis isn’t going to eliminate that possibility before it has a chance to even happen.

Again, if Antetokounmpo signs the super-max with the Bucks before the Dec. 21 deadline, Davis can do whatever he wants. He can sign a five-year max extension. He can opt for a two-year contract with an opt-out in 2022, when he would be able to sign for the full 35 percent of the cap with 10 years experience. Factoring for the possible addition of Giannis will no longer be necessary.

But until Giannis commits to Milwaukee, the Lakers, and a bunch of other teams with even halfway feasible cap situations, are going to line up their ducks in as neat a row as possible for the chance to chase him. It’s what’s good for business, both for the Lakers and the league as a whole. But man, from a competitive standpoint, can we all agree this would absolutely stink?

I mean how far are these guys going to go in stacking the deck? Competition used to be about the pursuit of winning; now it’s about eliminating, to whatever extent possible, the possibility of losing. LeBron started all this when he went to Miami. Kevin Durant joined a 73-win team he couldn’t beat. Now Giannis is going to warp out of Milwaukee to conquer the game by way of a purple and gold glitch? Come on, man. Have some pride.

Of course, Giannis hasn’t done this yet, or even indicated he would consider it. But if this is what Davis is planning for, then he’s already guilty. It wasn’t enough to force his way to LeBron, now he wants to add a Freak to the gang that already won a title with KCP as the third-best player?

To be fair, something like this would be more about Davis remaining championship viable in the post-LeBron Lakers era, but it still reeks of wanting to stack the deck. Call me old-fashioned. I totally get the idea that you pretty much have to play with one other star to have a chance to win it all these days, but at a certain point of ganging up you’re just wimping out. Durant wimped out. There’s no way around it. And if Giannis were to ever go to the Lakers to play with LeBron James and Anthony Davis, he would be wimping out, too.