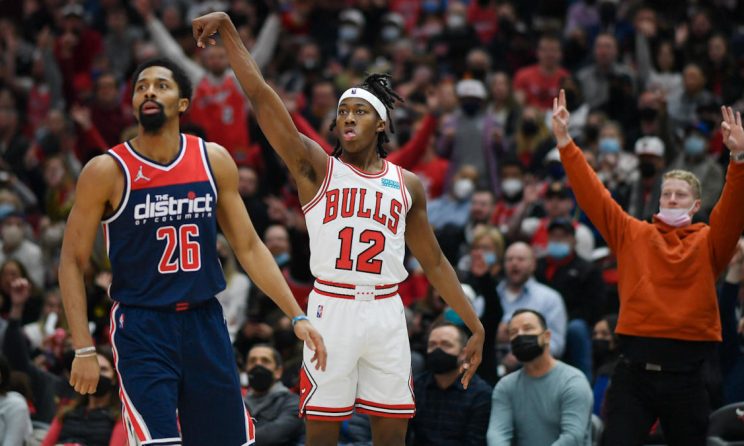 Hello, everyone, it’s me, Tom Fornelli. I am back from a weekend in Indianapolis covering the national title game, and I’m ready to start handing out more winners. I’m also very much in an old man yelling at clouds kind of mood today, and it was set off by the featured game in tonight’s newsletter.

The Chicago Bulls have been bad for the last few years, which means they haven’t played many  game on national television. Well, if you haven’t heard, the Bulls are back and currently have the best record in the Eastern Conference, 2.5 games ahead of the second-place Brooklyn Nets. The two will play tonight.

Initially, this was just a Wednesday night game, but ESPN picked up the game because it’s the two best teams in the East. That’s great! More people get to watch and learn that the Bulls are back, but there’s one problem.

The game doesn’t start until 10 p.m. ET. Yes, for some reason, a game being played in Chicago between teams from the Central and Eastern time zones is starting that late. I guess ESPN wants to make sure everybody on the west coast is home in time to watch? I mean, what’s the point of picking the game up if you’re going to televise it at a time when the majority of people who want to watch it won’t want to watch it?

All right, time to make an extra cup of coffee and get to work.

All times Eastern, and all odds via Caesars Sportsbook

The Pick: Under 236 (-110): If we’re going to be up late watching it, we might as well bet on it. And if we’re betting on an NBA game between two of the best teams in the league, we might as well bet the under. It’s a tried and true formula that has benefitted us in the past, and it should do so again tonight.

Not surprisingly, the Bulls and Nets have proven to be two of the better defensive teams in the league this season. The Bulls rank ninth in defensive rating, while the Nets are 12th. What’s interesting to me about tonight’s game is that Kyrie Irving should play (he’s listed as questionable but expected to play) for the Nets. It would be his third start since Brooklyn decided it’d rather have Kyrie some of the time than a G League scrub all of the time. Kyrie has been relatively inefficient offensively in the first two, which is to be expected from somebody who hasn’t played. What’s different tonight is that Kyrie’s first two games were against Indiana and Portland, and they’re two of the worst defensive teams in the league. Tonight he’s going to have Lonzo Ball in his grill, as well as Ayo Dosunmu and a host of long, annoying defenders.

Jonathan Coachman is joined by Larry Hartstein, Zack Cimini and Justin Perri to dish out Wednesday’s best bets. Download and follow The Early Edge on Apple Podcasts and Spotify.

So I expect the Nets offense to look a bit disjointed, but I wouldn’t be surprised to see the same from the Bulls, who are on the second night of a back-to-back after steamrolling the Pistons on Tuesday. In other words, I’m not going to be surprised if there are some ugly stretches of basketball tonight, and a couple might be all we need to stay under this number.

Key Trend: The last six meetings have gone under.

Here’s what SportsLine is saying about the game: The SportsLine Projection Model is a bigger fan of betting the spread tonight than the total.

The Pick: Xavier -1.5 (-115) — Villanova seems to have gotten past a rough start to the season. The Wildcats have won four straight since a 7-4 start, including a 71-58 win over Xavier last month. The Musketeers started that game well and had a 38-30 lead at halftime, but the Wildcats took over in the second half, outscoring them 41-20. You might remember this because we bet Villanova that night! Now we’re on the other side because that was only Xavier’s second road game of the season, and they’re pretty well-rested coming into tonight.

While Nova has won three more games since that night, Xavier’s played only one game, and it was an 87-72 win over Butler (we bet on them that night, too). Villanova is much better than its overall record suggests, but it’s still not a great shooting team, and that’s always something to look for when betting against a team on the road.

Basically, the strength of the Villanova offense is that it takes care of the ball and doesn’t give possessions away, but Xavier isn’t a team that looks to force turnovers. Instead, they use their size and length to defend shots, and they have a size advantage against this Villanova team. The Musketeers are also an excellent rebounding team, and Villanova is not, so that’s another area I think the Musketeers can exploit at home.

The Pick: Florida -2.5 (-110) — There’s some value on the Gators here. They’re coming off of two straight losses and are up against an LSU team that’s awesome, but an LSU team that hasn’t spent much time outside Baton Rouge this season. That’s an area I’ve been exploiting the last few weeks and one that’s proven to be profitable for me. The Tigers have played one true road game this season, and it was a 15-point loss at Auburn at the end of December. Tonight they’re on the road again against a Florida team that can be a real pain in the butt on defense, and LSU will be without Xavier Pinson.

For an LSU team that already turns the ball over a lot (19.6%, 217th nationally) going against a Florida defense that forces a lot of turnovers (24.2%, 18th), being without a primary ball-handler on the road isn’t the greatest recipe for success. That is why I think the Gators can pick up a win tonight and cover this spread, though there are some concerns. LSU has been one of the best defensive teams in the country this season, however the absence of Pinson could prove to be a problem for the Tigers on that end of the court too.

🔒 SportsLine Pick of the Day: The SportsLine Projection Model’s favorite play of the day by a mile is on one side of the spread between Gardner-Webb and Presbyterian. Real degenerate stuff!

Golf is back! That means it’s time for us to start betting it again. Last season we had success betting top 20 finishes, and this year we’re changing it up to top 10 finishes. I wouldn’t bet a full unit on each of these, unless you’re prepared to deal with some extreme swings in your bankroll.