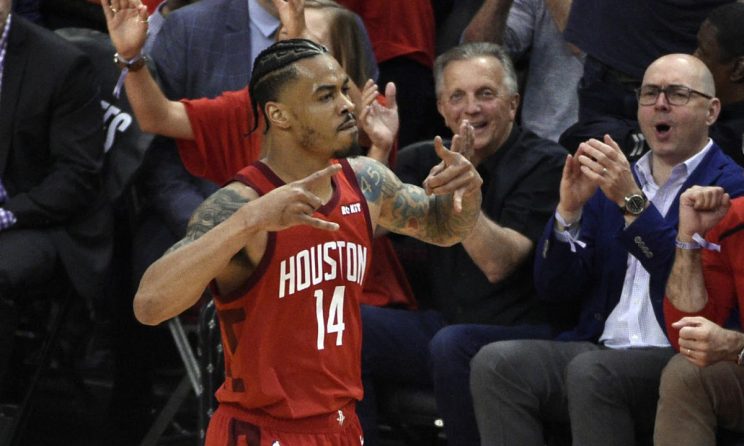 Former Rockets guard Gerald Green, who now plays for Houston’s G League affiliate club while seeking an NBA return, recently took the time to revisit some painful history during an appearance on the “Inside Buzz With Mikey Domagala” podcast.

“If Chris Paul doesn’t get hurt (in the 2018 Western Conference finals), we win a ring,” said Green, a key shooter off Houston’s bench from 2017 through 2019. “Easy. We would’ve beat them. We were the better team. We was ready for them. We would’ve beat Cleveland pretty easy.”

“We were special,” Green said of Houston’s 2018 squad. The complete episode with the native Houstonian can be listened to below.

The 2017-18 Rockets finished 65-17 in the regular season, by far the best record in the NBA that season and in franchise history. But they did not win the title after falling to eventual champion Golden State in a dramatic seven-game series, with Paul limping off during the final seconds of Game 5 due to a Grade 2 hamstring injury. At the time, Houston was up 3-2 in the series, but the defending champion Warriors beat the Paul-less Rockets in each of the final two games to advance.

While the Rockets were not technically one victory from a championship — they would still have had to win the 2018 NBA Finals versus Cleveland, even had they won a Game 7 versus the Warriors at home — the reality is the 2017-18 Rockets were far better than those Cavaliers (50-32), on paper. Even if Paul had not been able to play, James Harden’s MVP presence would still have made Houston a substantial favorite.

Draymond Green, a star player for those Warriors alongside Steph Curry, Kevin Durant and Klay Thompson, said the same during a recent podcast of a hypothetical Rockets-Cavaliers matchup in 2018.

“I don’t think there was any other team that could have beaten that Rockets team,” said Golden State’s Green.

The Warriors’ defensive anchor did not go as far as Houston’s Green did with regards to a hypothetical Western Conference finals outcome, had Paul stayed on the court. That’s quite understandable, of course, since no one is interested in playing down their own team.

Either way, though, the sentiment holds: The 2018 Rockets were on the cusp of immortality, had Paul been able to stay healthy. Unfortunately, he did not, and that set off a chain of events that has led to Houston’s current rebuild and a hope of eventually scaling that mountain again.