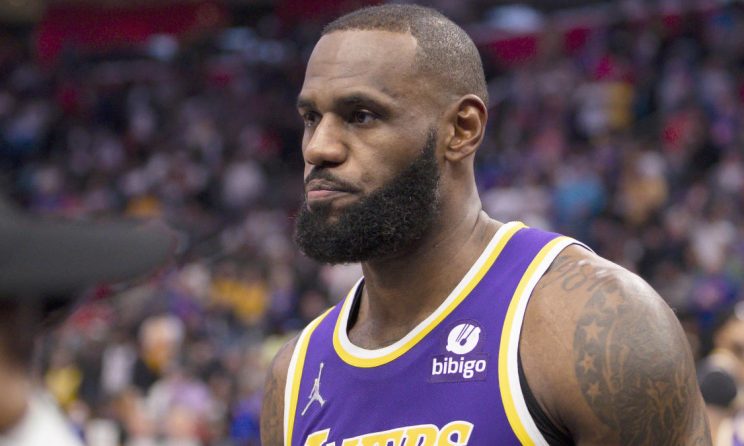 The Los Angeles Lakers built their 2021-22 roster in part around the idea that LeBron James couldn’t continue to carry the entire team. After missing 27 games last season, they traded for Russell Westbrook and signed a number of supplementary ball-handlers hoping to be able to rest James more comfortably throughout the regular season and keep him fresh for the playoffs.

That isn’t exactly how things have played out thus far this season. Through his first 12 games, James has averaged 36.9 minutes. That’s his highest total as a Laker and tied for the second most he has played over the past eight seasons, which encompasses all of his 30s. James will turn 37 later this month, so ideally, the Lakers would prefer not to have to rely on him as much as they have. Head coach Frank Vogel acknowledged Sunday that while they are monitoring the situation, there are no easy answers here for a 12-12 team in need of its best player.

“We’re always monitoring his load and just being intelligent with it,” Vogel told reporters. “Obviously the overtime games are what they are. He’s going to be in there for those, but like you said, he has missed some time. The totality is I think less of a concern than if he played a triple-overtime game and then you played the next night, do you exercise caution in those instances? It’s just something that literally we monitor on a daily basis. We rely on the medical team and feedback on how he’s feeling and make smart decisions.”

Vogel makes an interesting point about overtime games. James has played in 12 total games … and four total overtimes. That means that overtimes alone represent nearly five percent of his total minutes thus far this season. Without them, he’d be playing a more manageable 35.3 minutes per game. That would put him roughly in line with his 2018-19 workload, but perhaps more distressingly, he’s taking 20.2 field goal attempts per game. Granted, a career-high 8.4 of them per game have been 3-pointers, but he hasn’t taken this many shots since the 2007-08 campaign. That was his age-23 season.

There is no single solution here. James has made it clear that he prefers to play big minutes if he’s going to take the court at all, and the Lakers haven’t exactly proven that they have a margin for error big enough for James not to take this many shots. But this team was constructed specifically to prevent this scenario. Thus far, the Lakers haven’t been able to do so. Now they not only need to figure out how to right the ship, but must do so in a way that is more conducive to LeBron’s long-term health.