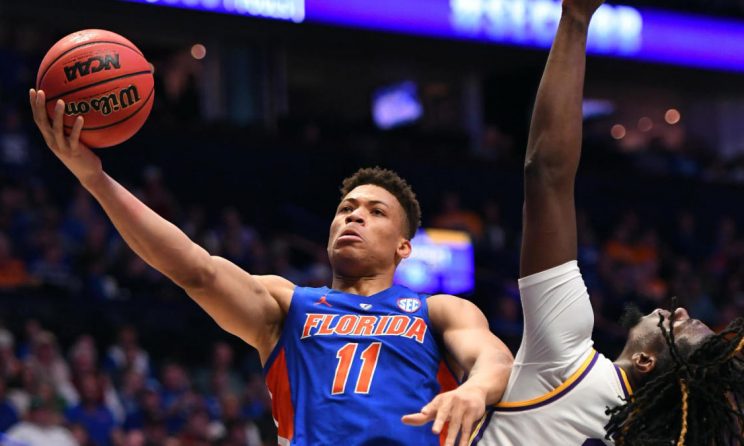 Florida star Keyontae Johnson collapsed Saturday morning in the first half of the Gators’ game against No. 20 Florida State and was hospitalized overnight. He is in critical but stable condition, according to Florida officials.

“We appreciate all the medical personnel who have helped Keyontae,” said Scott Stricklin, Florida’s athletic director. “Keyontae received terrific care on site by the FSU staff and at Tallahassee Memorial, which has worked in consultation with UF Health. We’re glad his parents can be by his side, and they feel the support of Gator Nation.”

Johnson’s collapse came after a timeout on Saturday just minutes into the game, and he was taken off the court in a stretcher. Just prior to the timeout, he had finished an alley-oop with force that gave the Gators an 11-3 advantage. It remains unclear what caused him to collapse.

The game continued as planned despite Florida players in clear distress over the status of their star teammate, and the Seminoles went on to win 83-71.

“I told our staff I was going to let them make that decision,” FSU coach Leonard Hamilton said after the game about the decision to call the game or keep playing. “It was totally up to them and whatever they thought was in the best interest of their team, then I would accept it and act accordingly. Our administration asked me, I just told them I would be OK with whatever they decided. It’s my understanding that they wanted to play.”

Florida coach Mike White opted not to address the media in his normal postgame press conference Saturday, and instead of returning to Gainesville with the team, he stayed in Tallahassee to be with Johnson in the hospital. White tweeted the following message after the game “Please keep praying for @Keyontae and his family. We all love him.”

Players, teams and coaches from across the country all offered Johnson their support, ranging from Auburn’s Bruce Pearl and Texas Tech’s Chris Beard to UCLA’s Shareef O’Neal and Florida State’s own account.

Johnson was named SEC Preseason Player of the Year after opting to put the NBA on hold in a bid for a big junior season at Florida. He averaged 14.0 points and 7.1 boards per game last season and through three games this season ranks fourth among all SEC players in points per game at 19.7.