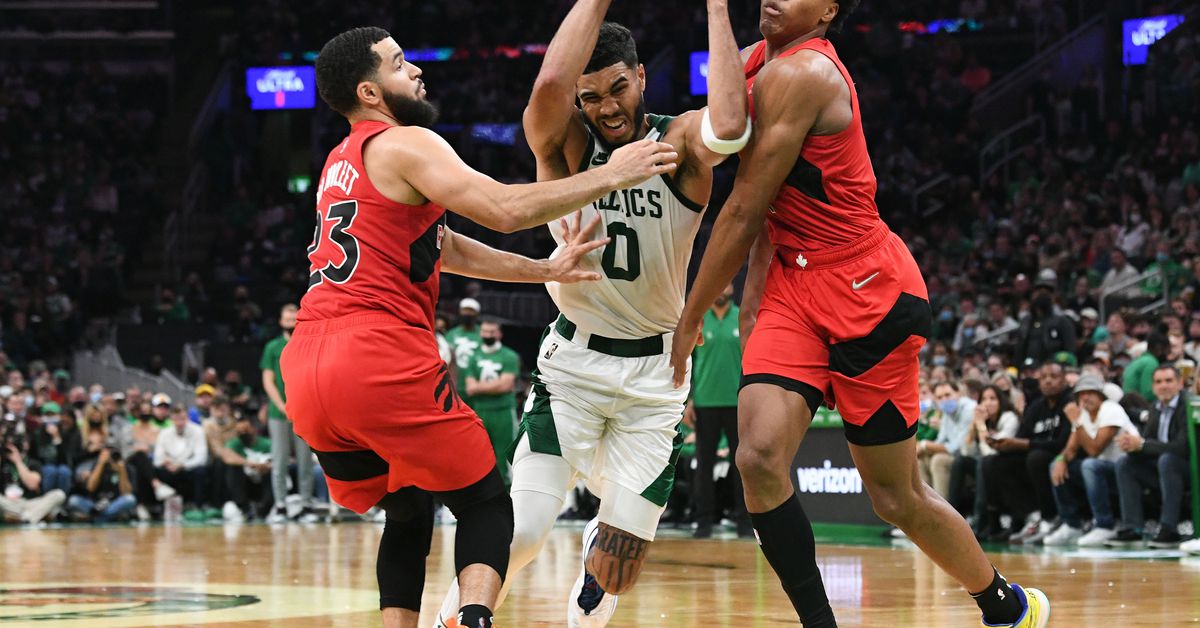 Here’s a simple truth: it’s much harder to outscore your opponent when you take twenty fewer shots than them.

That basic equation was evidence of the Boston Celtics’ struggles during Friday night’s home opener, dropping to 0-2 on the season at the hands of the Toronto Raptors. The Raptors, who feature a swarming, athletic frontcourt and have generally applied pressure on the perimeter under head coach Nick Nurse, took 100 field goal attempts and 21 free throws, while the Celtics mustered up only 82 shots and 11 free throws.

Almost every metric went in the Raptors favor during the lopsided performance, none more striking than the 25 turnovers committed by Ime Udoka’s squad. The Raptors were everywhere on defense, crowding the lane and disrupting anything Boston wanted to do. The Celtics finished with more turnovers than assists (19) and only 32 points in the paint.

Toronto’s pressure defensively was evident from the jump, smothering Al Horford on the first possession of the game to force a steal and get out in transition:

Credit to the Raptors for their defensive hunger. Udoka got directly to the point in his postgame presser, scolding his team for their inability to match that energy. “That’s as ugly as it’s going to get,” said Udoka. “One thing I can’t stand as a coach is to get punked out there and I thought they basically came out and punked us, outplayed us, played harder than us.”

It’s hard to find one Celtic who played well. Marcus Smart was scoreless. Jaylen Brown (3-13 FG, 0-7 from 3) was cold and had 0 assists with 5 turnovers. Dennis Schroder had several questionable decisions, getting into the teeth of the defense and then looking incredibly passive. The quick point guard had little problem breaking through the first line of Toronto’s defense. Yet when he’d get to their second line, Schroder would look to pass instead of score.

Raptors help defenders simply didn’t help to Schroder, instead bluffing at him once and then recovering to their man. The result: Schroder throwing passes to guys who aren’t actually open, the cause of three turnovers:

Consistently, the Raptors sat on the elbows from one pass away or would swarm from behind when a Celtic picked up their dribble. Their mission was simple: pack in the lane and go for the ball with two hands. A nonchalant offensive group easily gets punked by such efforts, and unfortunately that was Boston on this night.

Every time a help defender came, he got a piece of the ball. Without fail, the Raptors’ aggressive defense caught every Celtic ball handler napping:

There’s a lesson to be learned in those plays: always be strong with the ball and perhaps make your passes a half-step sooner. Indecisiveness kills, and the Celtics were unable to be decisive in the right ways on Friday.

The flow of the game broke open in the second half, especially during the tail end of the third quarter. But the Celtics’ energy was lackluster from the tip. Not just the opening possession turnover from Horford, but another throwaway in the early first quarter gave the Raptors a transition attack. What’s most disappointing is how little urgency some of the Celtics had to get back on defense.

Watch Horford and Smart after the turnover. Their bust out to get back against a faster, more athletic Raptors team simply wasn’t there:

That lack of effort, plus Toronto’s fervor to create turnovers on defense, lead to a blatant advantage for the Raptors in transition. They scored 22 fast break points, dominating the Celtics in the open floor. Six points in the second quarter came from layups that were completely uncontested:

Something had to give. Either the flood gates would open if this level of defensive effort and ball security continued for the Celtics, or they’d solve their issues and the game would slowly even.

One area Udoka has been incredibly clear on through the preseason is his lack of tolerance for talking to officials during the game. Complaining about calls is a bad look and prevents the guys from making the next play. We saw that in transition in the third quarter. Tatum went for a drive against Barnes, and went off one foot, somewhat fading away. Barnes had solid position, but Tatum thought he should have gotten a foul call. He turned to the official after Scottie scooped the defensive rebound, thus giving Barnes a runway to take off in the full court.

Barnes capitalized, strolling to the rim and convincing Udoka to call a timeout as boos rained down in the Garden:

From an offensive perspective, the Celtics couldn’t get into a rhythm even when they weren’t turning it over. The Raptors showed what an effective switching defense can look like. Switching can be dangerous because it naturally creates mismatches. The Raptors showed a great deal of experience at inviting the offense to try to exploit that mismatch, then swarming with help to make them regret that decision.

Jayson Tatum got the much smaller Fred VanVleet on a post-up and took the bait. VanVleet dared Tatum to drive baseline. When he did, rookie Scottie Barnes was waiting, sprinting towards the rim to make Tatum hesitate:

Barnes didn’t get a hand on the ball or block a shot, but the fervor with which he lunged at Tatum forced the C’s best scorer to Euro step around contact instead of spring through it. Tatum brought the ball to his hip as a result, right where VanVleet could get his paws on it and force a tie-up.

This textbook execution is something the C’s can learn from. They’ve taken their lumps when it comes to their tightness on a switching defense, and perhaps watching more film on the Raptors would be an educational experience.

Offensively, Boston never really looked engaged. Several uncharacteristically lazy plays marred their evening. Jaylen Brown stepped out of bounds twice in the first half. Multiple illegal screens were set. No one of these plays in a vacuum is a backbreaker, but the combination of all of them against a pressuring defense eats away at the Celtics’ ability to climb back in the game.

A deficit of 10 at the five-minute mark in the third quarter ballooned to 20 by the end of the period. From there, any semblance of life was zapped from the Celtics’ lineup and the TD Garden. The fourth quarter was a sloppy embarrassment, eliciting more boos from the Boston spectators and only widened the gap between adversaries on the scoreboard.

Basketball is a fun game when played with energy and passion. It sure looked fun for the Raptors on Friday. As for the Celtics, there are several structural or execution tweaks to be made and learn from the game. But you can’t address what the players do until you address how they do, and that seemed to be the biggest issue. The Celtics were flat, on their heels and uncharacteristically uninspired.

Let’s fix that before anything else.