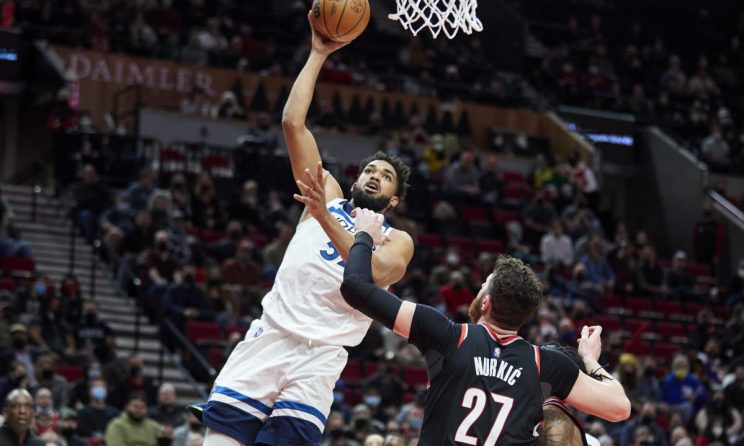 PORTLAND, Ore. (AP) Anthony Edwards had 40 points and the Minnesota Timberwolves rallied in the fourth quarter to beat the Portland Trail Blazers 109-107 on Tuesday night.

Karl-Anthony Towns had 17 points and 17 rebounds for the Timberwolves, who improved to 24-23 to surpass their win total from all of last season (23-49).

The Blazers’ Jusuf Nurkic had 20 points and 14 rebounds for his sixth straight double-double, longest streak of his career.

The Timberwolves trailed for much of the game until pulling in front heading into the fourth quarter. They stretched the margin with a 3-pointer from D’Angelo Russell to make it 102-95 with 4:26 left – the biggest lead of the game to that point.

Russell got the game-winning basket with 2.9 seconds left on a goaltending call against Portland’s Anfernee Simons. Russell finished with 22 points.

The Blazers were back in Portland for a quick two-game homestand after an extended road trip during which they went 4-2. While on the road, the Blazers saw the return of McCollum, who missed 17 games with a collapsed right long and the birth of his first child.

Then on Tuesday, Powell returned to the court after missed the last eight games because of COVID-19 protocols and personal reasons. Portland is still missing star guard Damian Lillard, who is out indefinitely after abdominal surgery.

The Timberwolves were without Patrick Beverly, who missed his second game with a right ankle sprain.

Ben McLemore’s 3-pointer gave Portland a 34-26 lead in the opening half. The Blazers pushed the lead to as many as 13 points before going into the break ahead 63-55.

Portland was hampered in the third quarter when Nurkic collected his fourth foul and went to the bench. Without his defense, the Timberwolves closed the gap to 79-77 late in the quarter on Towns’ 3-pointer.

Edwards’ 3-pointer tied the game at 82 and he followed up with a layup that gave Minnesota the lead going into the fourth quarter.

It was the second of four meetings between the two teams this season. The Timberwolves won the first, 116-111 in Portland on Dec. 12.

Timberwolves: The game against the Blazers was the first of a three-game road trip. … Minnesota was coming off a 136-125 victory at home over Brooklyn. … Edwards led all scorers with 19 points in the first half alone.

Trail Blazers: Nassir Little was leading the Blazers with 20 points when he appeared to injure his left shoulder with just over eighth minutes left in the game. … Portland announced during the game that backup center Cody Zeller underwent surgery earlier Tuesday to repair a right patellar avulsion fracture. The team said he’ll be reevaluated in eight to 10 weeks. Zeller was averaging 5.2 points and 4.6 rebounds a game this season.