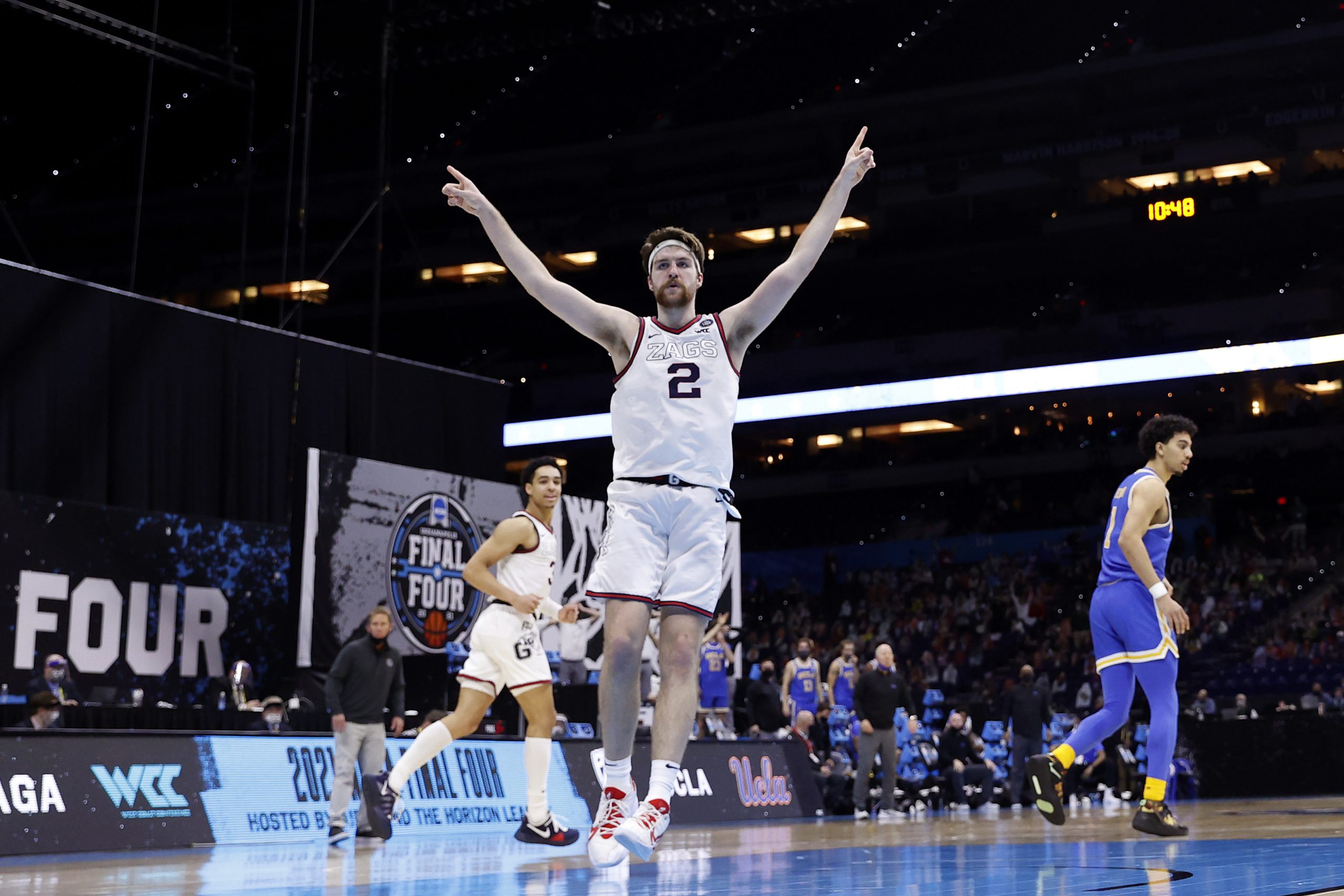 Drew Timme joins the Zoom call from his apartment in Spokane, WA. We’re talking about his favorite players—the guys who have inspired him, the ones he’s modeled his game after and whose careers he’d love to emulate. The Gonzaga big man grew up in suburban Dallas, so at least one name is a no brainer. “I’m a Mavericks fan, a big Dallas guy,” he says, “so, of course, Dirk’s my favorite player of all time.”

Looking at the modern NBA, another player is nearly as clear-cut a choice. “Obviously Jokic—he’s crazy,” Timme says of the reigning MVP. “He’s not the flashiest or most athletic, but the way he sees the court, it seems like he can score any way he wants.”

He’s a fan generally of versatile big men, fitting role models for a 6-10 low-post wizard working to expand his own range and skill set. But there’s another guy who Timme mentions, a name that’s a bit less obvious coming from a 21-year-old white dude. “Allen Iverson—I love his swagger, and you know, I wear a headband,” he says with a laugh. But on this, it’s clear he’s sincere.

“What I really loved about him was how he was just himself, every time he stepped on the court. I really looked up to him for that; I think it’s important if you want to be the best.”

Timme’s trademark March Madness mustache will never rival Iverson’s braids for icon status, but his admiration for AI’s unapologetic realness is genuine—as is his commitment to maximizing the impact of his own game as he chases a national championship, national POY honors and a possible NBA future. The next few months will determine the first two of those goals, but in the midst of his third college season, Timme’s legacy as one of the modern game’s most entertaining throwbacks is already a lock—and still arguably the biggest reason Gonzaga will have another shot at a chip this spring.

When we caught up with him in December, Timme was still getting used to the return of fans at games after the empty gyms of the pandemic-limited 2020-21 season. “I love the energy the crowd gives, whether it’s good or bad,” he says. “It’s extra fuel for me.” Not that he or the Bulldogs should need extra motivation: Everyone remembers Gonzaga’s perfect run to the 2021 national title game and how that turned out. What’s easy to forget is that the Bulldogs might’ve won a title the year before, if not for the cancellation of the 2020 NCAA Tournament due to COVID-19. Timme came into his junior season as the leader of the preseason No. 1 team and with a combined college record of 62-3.

“We hold ourselves to the standard of being the best version of ourselves we can be, which is being [the] best team in the country,” he says. “We see pressure as a privilege.”

He sure doesn’t play like it bothers him. He averaged 19 ppg as a sophomore last season, doing much of his damage with an array of up-and-unders and put-backs and looping runners that make the game look fun. He returned this year to preseason national POY acclaim, looking to try to finally secure that elusive national championship, to mentor young stars like freshman teammate Chet Holmgren, and to prove that he himself is ready for the next level.

Whether his game will translate to the NBA is, for the moment, beside the point. “I came back to win a championship and get better,” he says. “That’s all I’m focused on.”