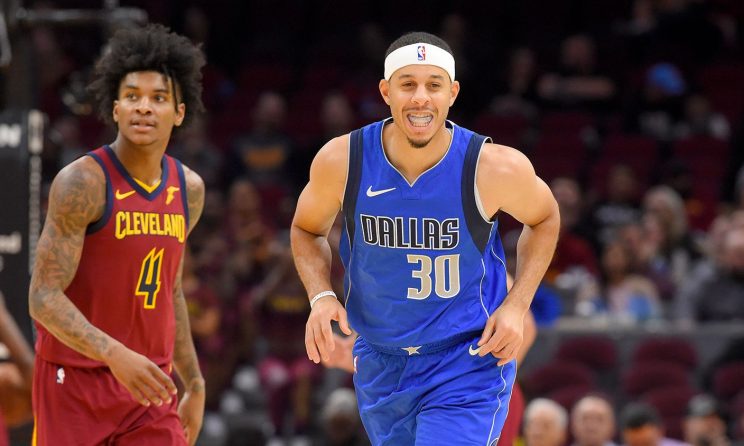 Seth Curry does one thing exceptionally well. He knows it, and so does the rest of the NBA.

“I feel like if I create good shots for myself, I can make them at any spot on the floor,” the new Sixers guard said Wednesday in a virtual media availability.

Curry, though, sees himself as much more than a one-trick shooter.

“I think throughout my career I’ve gotten better at creating shots and not just being a three-point shooter; being able to put it on the floor and score at the rim, at all three levels, really,” he said. “That opens up more three-point shots for me. I think I’ve just developed different areas of my game which allow the best parts of my game to be even better.”

Both a review of Curry’s tape and a glance at his statistics support his point. His comfort zone has expanded after stints at two colleges, time in the D League and stops with six NBA teams. A strong note of caution is necessary because of small sample sizes and the fact that he wasn’t the only player to thrive in the Mavs’ top-rated offense, but Curry was in the 78th percentile or higher in transition, in isolation, on handoffs and as a pick-and-roll ball handler.

With the Sixers currently lacking a conventional backup point guard behind Ben Simmons — Shake Milton and rookie Tyrese Maxey are alternative ball handling options — Curry is confident he can initiate the offense at times if that’s what Doc Rivers (the Sixers’ head coach and also his father-in-law) asks of him.

“I played point guard for a year in college and even in the league at times — at certain moments, whether guys were out or just coming off the bench,” he said. “I’ve had a role playing a lot of pick-and-roll and creating off the dribble, as well. I feel like I’m a pretty versatile offensive player, not just a spot-up shooter. That’s the main part of my game, but to have an effective career and play a long time, I’ve gotta be able to do it in different ways. I think I’ve been able to show that thus far.”

Curry’s pairing with Simmons projects to be fruitful offensively. One similarity between Simmons and the last All-Star ball handler Curry played with, Luka Doncic, is that he sets up outside shooters often, assisting on 236 threes last year. Defensively, Simmons’ All-Defensive First Team skills figure to mask some of the 6-foot-2 Curry’s deficiencies, or at least enable him to guard players his own size.

“A lot excites me,” Curry said of playing with Simmons. “First of all, he’s a good player, man. You want to play with as many good players as possible. One of the best guys in this league on both sides of the ball, offensively and defensively. I feel like getting downhill, nobody can really stay in front of him 1-on-1, so that means you’ve gotta bring help and put two guys in front of him to stop him from getting a layup.

“That’s where guys like myself and Danny (Green) … can help him out as far as creating space for him to drive, and knocking down shots when he creates plays for other people. I feel like me and him are kind of a perfect match in the sense that he’s a bigger — I don’t know if you call him a point guard or what — but he’s a bigger ball handler who can make plays and defend multiple positions, and I’m kind of a smaller scorer who spreads the floor, shoots, can score in multiple ways and can guard smaller guys. I’m looking forward to working with him.”

Curry isn’t a reincarnation of 2017-18 JJ Redick and he’s not a flawless player, but it’s hard to object to his optimism about the fit in Philadelphia. His jumper deserves respect, as do other aspects of his offensive game, and such a package was rare on the 2019-20 Sixers.