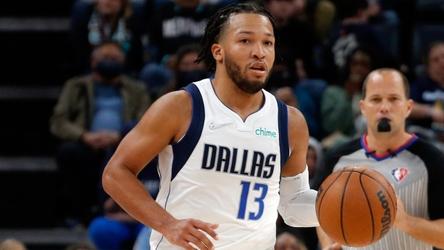 A note on the Knicks and Dallas Mavericks guard Jalen Brunson:

As the Feb. 10 trade deadline approaches, it’s worth noting that Jalen Brunson has been on the Knicks radar under the current leadership of team president Leon Rose.

As noted in The Putback earlier this week (19:20 mark) and in the New York Post more recently, the Knicks and Mavericks have had contact in the past about Brunson.

That contact, obviously, hasn’t yielded a trade to this point.

Last year, ESPN’s Tim MacMahon noted on The Putback that Dallas floated the idea of trading Brunson to New York prior to the 2020 NBA Draft in an effort to move up in the first round.

The Knicks and Mavs have had additional dialogue involving Brunson since those talks in 2020.

Dallas, for obvious reasons, values Brunson highly. But the club hasn’t signed him to a contract extension and Brunson will be an unrestricted free agent this summer.

Given this scenario, Dallas will likely get plenty of calls on Brunson ahead of the Feb. 10 trade deadline.

If he hits free agency, the 25-year-old Brunson will have multiple suitors.

And the Knicks probably won’t be able to make a competitive offer for him at that point.

New York doesn’t project to have enough cap space this summer to sign a player at Brunson’s level.

So the club would have to shed significant 2022-23 salary to be in position to sign Brunson in free agency.

The ties between Brunson and the Knicks are deep.

Brunson’s father, Rick, was one of team president Leon Rose’s first NBA clients when Rose was a player agent with CAA. Rose also represented Jalen Brunson at CAA before he took over as Knicks president. Rick Brunson, a former Knick, has coached with Tom Thibodeau.

Brunson was selected by the Mavs in the second-round (No. 33 overall) of the 2018 NBA Draft after leading Villanova to two NCAA titles. He’s averaged 11.1 points per game on 49.2 percent shooting from the field with 3.7 assists and 2.9 rebounds per game over 239 career contests (89 starts).

Brunson is in the final year of a four-year, $6.1 million deal with the Mavs, making $1.8 million this season. Dallas is currently the No. 5 seed in the Western Conference with a 23-19 record.