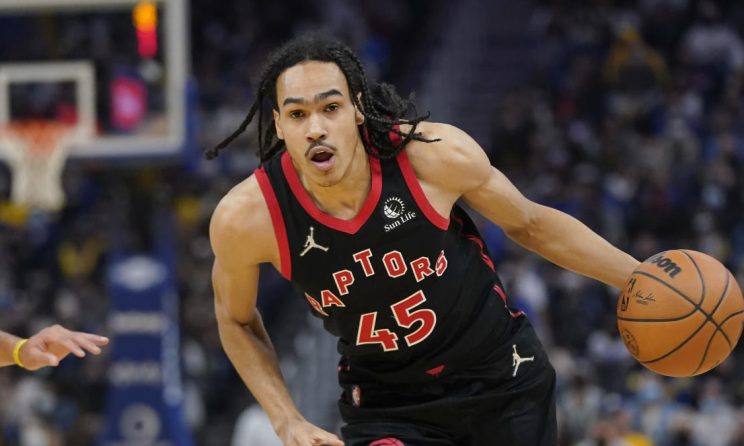 Whether with the Toronto Raptors, or Raptors 905 in the NBA G League, rookie Dalano Banton can seemingly impress on the court on any given night, and his teammates have taken notice.

The second-round pick is coming off a season-high-tying 30-point performance with the 905 on Monday versus the Capital City Go-Go. He finished by shooting 11-of-18 from the field in 32 minutes off the bench during the win.

Banton is one of 10 players with multiple 30-point games this season in the G League. The feat is likely even more impressive considering he has logged just three appearances with the 905, with a 23-point performance coming on Dec. 4.

Raptors teammate Scottie Barnes can see the potential with Banton.

Banton has played a minor role with the Raptors this season, averaging 4.5 points, 2.4 rebounds and 1.7 assists in 13.1 minutes across 24 appearances. With playing time limited, Banton has bounced back and forth between the Raptors and 905, something he is embracing.

The Raptors have experienced great success utilizing the 905 with the likes of Pascal Siakam, Fred VanVleet, Malachi Flynn and others playing for the team in the past. Given their success, Banton is relishing the opportunity to continue his development.

I’m just kinda trusting in the process they have going on for me. I trust in the development of the Raptors and I’ve seen it countless times of the guys who came before me. I’m just living in the moment and having fun out there.

The opportunity to play with the 905 will give Banton the opportunity to log extended minutes and continue the adjustment to the next level. It can give him the confidence to perform at a high level, despite seeing limited time with Toronto.

Banton will likely continue to play with the Raptors and 905 throughout the season as he hopes to be the next in line to benefit from a strong development system in Toronto.