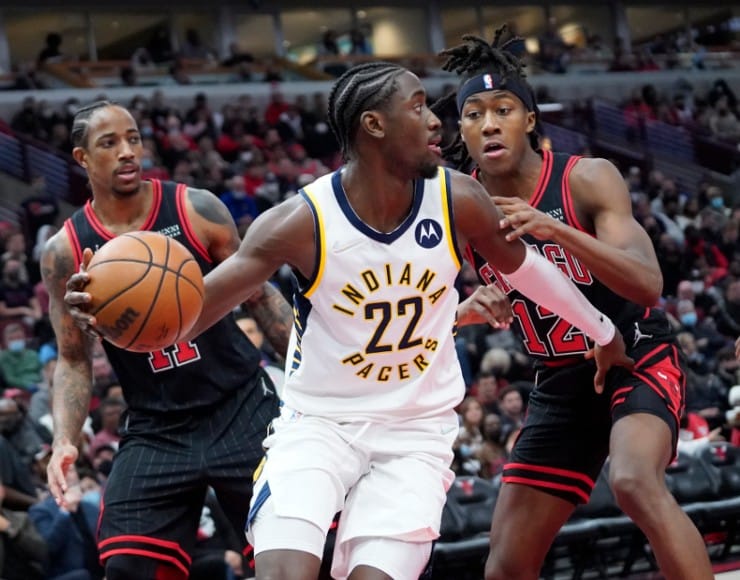 In Friday’s Eastern Conference matchup on New Year’s Eve, the Chicago Bulls (22-10) are playing the Indiana Pacers (14-21) at Gainbridge Fieldhouse. Will Zach LaVine and the Bulls extend their winning streak to six games?

Furthermore, heading into this afternoon’s intraconference clash, the Bulls are 21-11 against the spread in the 2021-22 NBA regular season, whereas the Pacers are 16-18-1 against the spread. This game will start at 3 p.m. ET. The contest will air live through Bally Sports Indiana, Bally Sports Midwest, Bally Sports South, Bally Sports Southeast, NBA League Pass and NBC Sports Chicago. According to Land of Basketball’s database, these two competing teams have played one another 197 times during the regular season. Chicago is 100-97 versus Indiana all-time.

As of yet, the series is split this season at 1-1. On Dec. 26, the second meeting in this regular season, Chicago won 113-105 at United Center. Switching gears, due to the number of players testing positive for COVID-19 across the NBA, teams have been signing players to 10-day hardship deals. Yesterday, the Bulls signed Jordan Bell to the aforementioned 10-day contract. This is an interesting signing because Bell was originally drafted by the Bulls at No. 38 overall back in the 2017 NBA Draft. But, of course, he was traded to the Warriors during draft night. The center averaged 3.7 points, 3.1 rebounds and 1.3 assists over the course of 160 career NBA games.

Shout out to Bulls PR for not pulling punches in this just-issued press release. pic.twitter.com/9pvkd4RRO7

Moreover, on Wednesday, in the Bulls’ 131-117 home win over the Hawks, guard Zach LaVine led his team in scoring, putting up 25 points in 32 minutes of action. Forward DeMar DeRozan ended his performance with 20 points, 4.0 rebounds and 8 assists in 36 minutes played. In the second quarter, Chicago outscored Atlanta 36 to 17.

Per ESPN’s Basketball Power Index, the Bulls have a 52% chance of winning.

As for the Pacers, in their 116-108 home loss versus the Hornets on Wednesday, guard Caris LeVert scored a team-high 27 points in 39 minutes played. Center Domantas Sabonis closed out his night with yet another career double-double, amassing 15 points, 18 rebounds and 7.0 assists in 37 minutes spent on the court. Although Charlotte outscored Indiana 54 to 32 in the free throw lane, the Hornets allowed 17 three-pointers.

For noteworthy betting trends, the Bulls are 4-1 ATS in their previous five performances. Not to mention, they are 3-7 ATS in their last 10 contests versus the Pacers. Next, Chicago is 3-11 straight up in the team’s past 14 games against Indiana, and the total has gone under in 13 of their previous 16 road matches versus the Pacers at Gainbridge Fieldhouse. However, the total has gone over in five of the Bulls’ past six contests.

On the other side, the Pacers are 1-5 ATS in their last six performances. And, the total has gone over in nine of Indiana’s previous 12 home games. Though, the Pacers are 0-5 ATS in their past five matches against Eastern Conference opponents. Next, the team is 2-5 SU in their last seven games played in the month of December. In the end, stick with the Bulls to win, but the Pacers will cover the spread. If you are new to sports betting, skim through our handicap betting guide.

Pick the Bulls to win, the Pacers will cover the spread and the total will go over 220.5. Chicago is a 4.5-point favorite on the road with BetOnline.