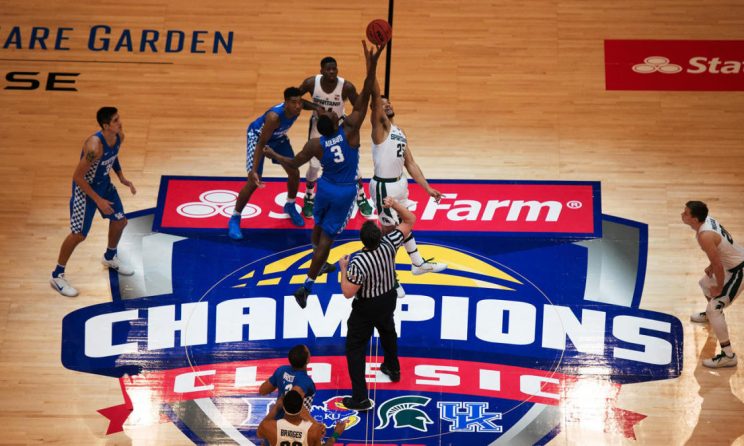 For the first time in the near-decade of its existence, the Champions Classic will be held at two separate venues. Sources confirmed to CBS Sports on Friday that Michigan State will travel to play at Duke on Dec. 1, while Kentucky will face Kansas at Bankers Life Fieldhouse in Indianapolis on the same day. Adam Zagoria, who covers college basketball for Forbes, NJ.com and the New York Times, was the first to report the news.

“This is done,” one source said. “Everybody is on the same page.”

Duke will have no fans in the stands for the Michigan State game. Sources told CBS Sports the reason the Champions Classic is not going to be in the same building is due to differing COVID-19 protocols between the Big 12 and SEC vs. the ACC and Big Ten. The event lucked out this season in that Kansas (Big 12) was scheduled to play Kentucky (SEC), and so Duke (ACC) was lined up for Michigan State (Big Ten). Had the game been in the same building, COVID-19 protocols and cleaning procedures might have led to an elongated wait between games. By moving one game out of the venue, it allows for the made-for-TV event to go off a lot easier.

The scheduling tweak means Duke will have to return to play at Michigan State, most likely for the 2021-22 season, one source said. What’s not yet determined is if that return will be part of the annual Big Ten-ACC Challenge or as a separate standalone tilt. Duke coach Mike Krzyzewski has made it his custom in recent years to not schedule any nonconference road games unless television contracts dictate otherwise.

Kansas is ranked No. 6 in CBS Sports’ master ranking of all 357 teams in college basketball. Kentucky is 10th, Duke is No. 12 and Michigan State No. 13.

An announcement on the Champions Classic will be made by the schools and ESPN (which broadcasts the event) next week. What’s yet to be decided is which game will air first. That night’s programming on ESPN will also feature the College Football Playoff rankings reveal, which has always been put on the air after the conclusion of the first Champions Classic game and before the start of the second. Since there are now two sites, there isn’t need for a 30-minute break between games, so the exact order of the CFP rankings reveal, Kentucky-Kansas and Michigan State-Duke is yet to be decided. When the official announcement is made, that information will be included.