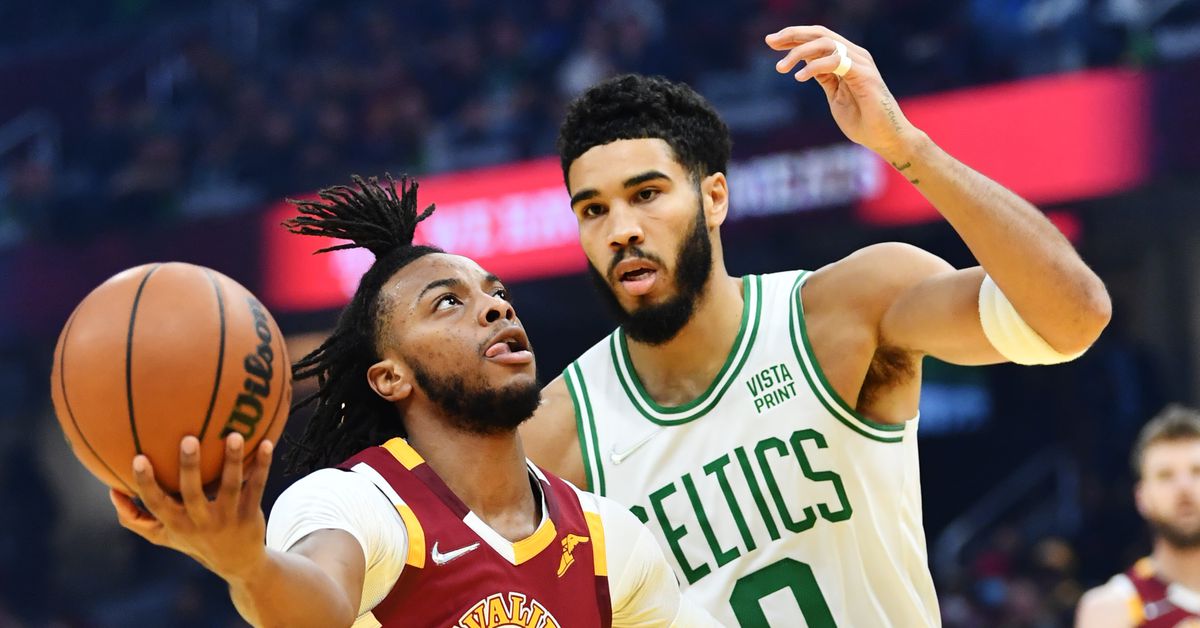 Dennis Schröder continued his hot scoring from one night to the next, but it wasn’t enough as the Celtics coughed up a 91-89 loss to the Cleveland Cavaliers. Schröder put up 28 points. For the Cavs, Darius Garland was pretty much the only player to have it going in the wine and gold for the first three quarters, posting 22 points.

For the second game in a row, Marcus Smart and Dennis Schröder have played well together in the starting lineup. Both played to their strengths – Smart passed exceptionally and quarterbacked the defense while Schröder was aggressive in using his speed to attack angles. The result was a smoother offensive experience despite another off shooting night from Jayson Tatum . . . until things fell apart.

There was even an extended stretch that saw Payton Pritchard, Jabari Parker, Aaron Nesmith, Romeo Langford and Grant Williams (who regained his shooting touch tonight) saw the floor together. That lineup surprisingly started out well (finishing off a fourth-quarter shutout that left Cleveland scoreless over the last 7 minutes and with 9 points total), but unsurprisingly overstayed its welcome, which briefly let the Cavs back in the game.

In the second half, that lineup was the beginning of yet another Celtics collapse.

In the second quarter, Darius Garland got it going en route to 18 first-half points. The difference between his performance and Dennis Schröder’s is that Schröder had multiple teammates that supported his offensive burst. Garland had Evan Mobley, who stepped up big time in the second half. He posted 19 points and 9 rebounds to go with 2 steals and 3 blocks.

The Celtics came out of the half with the same defensive intensity as in the first half. The Cavaliers are not world beaters by any means, but at 9-5 now, they’re also not pushovers even with the length of their injury report.

Unfortunately, the Cavaliers did go on a run to end the third and start the fourth, transforming a 20-point lead to a one-point lead behind a 21-2 run. Instead of getting the starters some well-deserved rest, the starters had to check in and stop the bleeding as the depth-starved lineup struggled to keep the Cavs at bay. This should have been an easy win after going up by 20, but the lack of depth forced Udoka to put out a lineup that got decimated and gave Cleveland confidence.

Finally, it should not go unnoticed that Robert Williams put up another understated All-Star performance with 12 points, 16 rebounds, 3 assists, 1 steal and 3 blocks on 85.7% shooting from the field.

Boston needs to figure out the fourth quarter. Every team coughs up big leads at some point, but so far this year, it’s the rule for the Celtics, not the exception.

Jaylen Brown revealed that he’s close to a return, pending how his body responds. He could suit up as soon as Monday. Boston sure could have used his scoring tonight. The Celtics take on the Cavaliers on Monday night in Cleveland for a rematch.

For more postgame coverage of the Celtics’ defensive masterclass in Cleveland, tune into the the Garden Report Postgame Show LIVE on CLNS Media right after the game. Join A Sherrod Blakely, Bobby Manning, Josue Pavon, Jimmy Toscano and host John Zannis for a full breakdown.

Plus, the guys will discuss Dennis Schröder’s continued excellence as a starter over the last couple of games. Tune in!