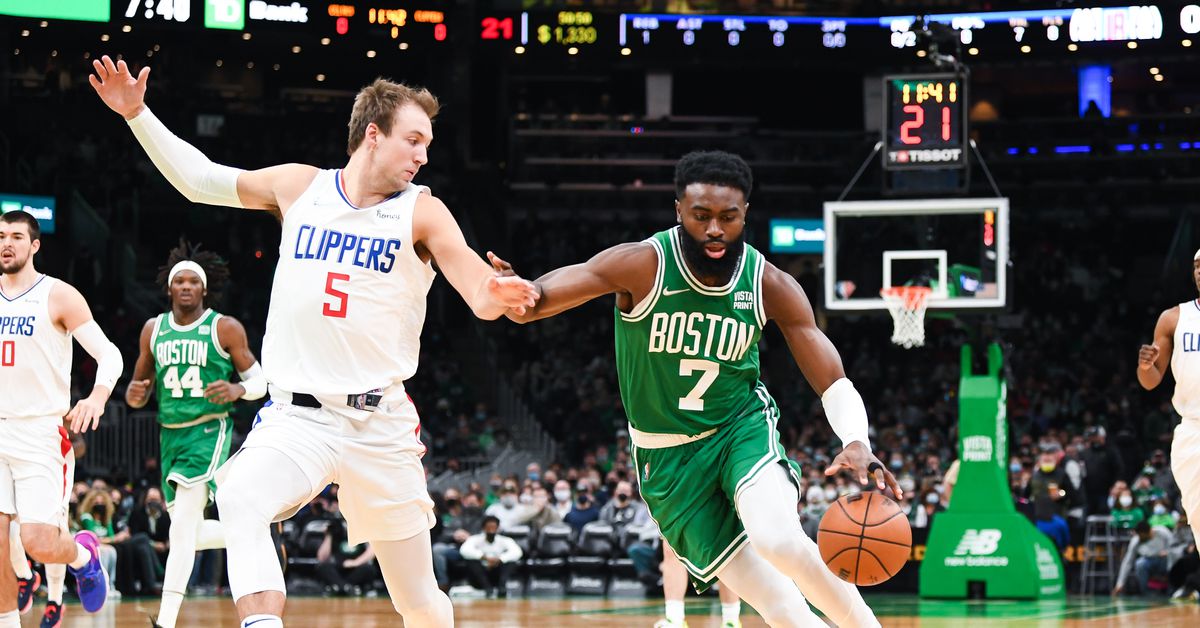 Coming off of the season’s worst loss earlier this week (their words, not mine), plus a slew of iffy efforts before that, it was past time for the Boston Celtics to respond accordingly in the form of a resounding win against a formidable-yet-weakened opponent. With the 17-17 Los Angeles Clippers in town, a team that lacked Kawhi Leonard (duh), Paul George (elbow), Nicolas Batum (ankle), Isaiah Hartenstein (ankle), Reggie Jackson, Brandon Boston Jr., and Jay Scrubb (health/safety protocols), the opportunity was both perfect and evident. And yet…

A back and forth affair that never actually felt all-that back and forth fell in the Clippers’ favor, as Boston failed to close out an equally matched opponent yet again, falling 91-82 in an ugly overall effort. It was Boston’s third straight loss, a game they desperately needed to win amidst this crucial homestand.

Marcus Morris (12 points in the first) and Terance Mann (seven points) carried the Clippers in the first quarter, combining to shoot nine-for-11 from the field, but the Celtics were able to hang around despite a shooting performance that, while decent, didn’t portend competitiveness when compared to the effort of their opponent. Boston shot 48 percent in the first, led primarily by solid showings from Jaylen Brown and Payton Pritchard, but they allowed the Clippers too many easy shots and left far too many points on the board. Nevertheless, they trailed by a mere five points through one; while Brodric Thomas nailed a three as time expired that would have made it a two point game, it was a bit late, allowing the Clippers to maintain a 26-21 advantage.

An up and down second frame followed, with the Celtics taking the lead early on, but falling behind by quarter’s end. Too often, Boston allowed the Clippers’ de facto marksman Luke Kennard to find opportunities for open triples — his favorite; he drained three out of seven in the half — and they let both Mann and Morris persist in their scoring efforts as the visiting Clippers built a seven-point lead through two quarters, 47-40.

The primary issue at the half was Boston’s inability to match Los Angeles’ defensive intensity. Without their best offensive players in George and Jackson, the Clippers were left to rely on their defense. If you’ve been paying attention this season, that’s not a bad recipe for this team; they rank fourth in the league in defensive rating, and they showed why in the first half. The Celtics shot just 18-for-46 (39 percent) against their opposition’s stout defense through two. Even the most efficient of Celtics, Robert Williams (who made four of his first five attempts), was -19 at halftime. The inefficiency shown just as brutally as ever.

Yet while Morris and Kennard continued apace in the third, it was finally time for the Celtics to respond with a vengeance and an energy unlike anything they’ve shown in their most recent efforts. Josh Richardson, fresh out of health/safety protocols, began contributing, making a handful of crucial shots, including one that brought the game within six in the final seconds of the third. Al Horford concluded the third with a total of seven points, five rebounds, and six assists, mere digits from a triple-double. Regardless of Boston’s inability to make a shot from deep, they were just down six through three, the Clippers carrying a 69-63 lead into the fourth.

To begin the fourth, Sam Hauser and Romeo Langford proved to be key contributors. You heard me right: Hauser drained a key triple early on, while Langford rebounded one of Hauser’s misses and made sure to finish a layup off said rebound to give the Celtics a one point lead. Boston and Los Angeles continued to trade buckets through the final frame’s midsection, but Boston won the hustle battle, led by Langford in particular.

With just under five minutes to go in the fourth, the Celtics extended a possession thanks to four offensive rebounds, ending the effort with a layup from Jaylen Brown, and ensuring a chance, at the least, for Boston. They’d persist with a similar effort, grabbing yet another crucial offensive board that led to another Brown finish, one that cut the Clippers’ lead to four with under three minutes remaining.

It simply wasn’t enough, though. Boston’s four-for-42 effort from three was hardly an output that would allow them to work their way back into the game; allowing the Clippers to nab multiple offensive rebounds that led to wide-open triples certainly didn’t help, either. Even with late buckets from Williams and Brwon, inconsistency is what dictated the day yet again. It wasn’t always a sure thing, but the Clippers walked away with a relatively easy 91-82 victory. When you shoot as poor as Boston did tonight, it’s hard for anything to come easy, let alone a win.

Jaylen Brown finished with 30 points on 13-of-26 shooting; Robert Williams (16 points to go with a -20 plus/minus) was the only other Celtic to finish in double-figures. Marcus Morris (23), Terance Mann (17), Luke Kennard (17), and Eric Bledsoe (17) paced the Clippers to what felt like a wire-to-wire victory.

Next up for the Celtics are the Phoenix Suns, who they’ll take on at home on New Year’s Eve; visits from the Orlando Magic and San Antonio Spurs will round out Boston’s homestand to begin January as the team aims to recalibrate at the top of 2022.

For more postgame coverage of the Boston’s first game back at TD Garden, tune into the the Garden Report Postgame Show LIVE on CLNS Media right after the game. Join A Sherrod Blakely, Bobby Manning, Josue Pavon, Jimmy Toscano and host John Zannis for a full breakdown. Plus, the guys will discuss the Celtics anemic three-point shooting and Jaylen Brown shouldering the scoring load.