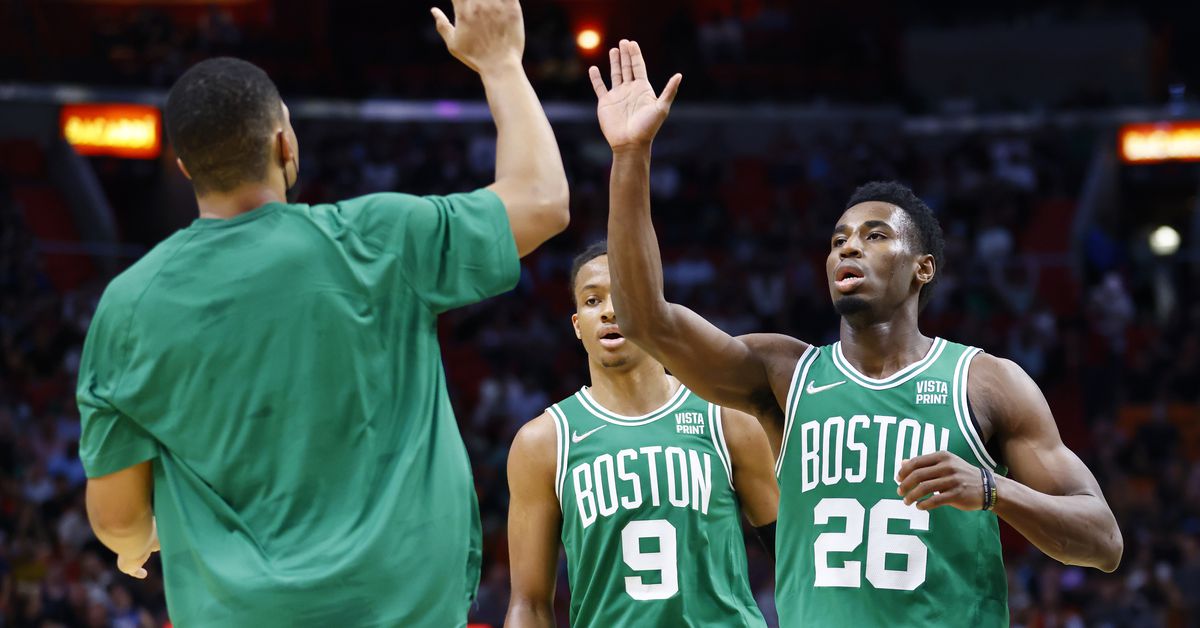 Lousy offensive nights from Jayson Tatum are, oddly enough, like four-leaf clovers. For every one of them, expect to find 10,000 three-leaf plants. The Celtics view this as a luxury, never mind the fact that it means rejecting their literal logo in the process. They’d obviously much rather take 10,000 great nights than one mediocre-to-bad night. To start this season, Boston has seemed a bit too dependent on those 10,000 nights, and the rare off nights — of which there have been more to start this season than perhaps ever before in Tatum’s young career — have come back to bite them in vulnerable moments.

So it was a welcome sight to see relief coming in the form of reserves during last night’s rout over the Miami Heat, 95-78. The now 4-5 Celtics didn’t exactly need one of Tatum’s star-making performances to stay afloat thanks to 45 bench points, with primary contributions coming from Dennis Schröder (14), Aaron Nesmith (13), and Romeo Langford (12). All three had yet to hit their stride this season heading into last night’s game; they couldn’t have picked a better night for things to break right.

“We feel like every game is important, just to give the starters some help coming off the bench and some energy,” Langford said following the win. “We knew it was the second night of a back-to-back, so we had to bring it a little bit more because we knew from last game, guys were going to be a little tired. I felt we did that.”

That they most certainly, in no small part thanks to Langford’s productive, 50-percent shooting night from the field, not to mention his defensive effort that ensured the Celtics a buffer every time he appeared on the floor. His plus-25 differential was second-highest on the team, and he never appeared to rush his game the way he has in the past.

When he’s struggled the most, it’s been because he looks for playmaking opportunities where there isn’t one, or simply chucked up a shot because it appeared viable for a split second, thus killing a possession. He didn’t do that last night. He played calm, but not lazily calm; he was composed and effective at nearly every turn.

One shot, in particular, was pivotal from Langford: with Miami making a run in the third quarter, cutting a lead that had surpassed 20 down to 10, he made a big three in the corner to stop the siege of Heat scoring. And yet Langford didn’t even realize that it was a big deal. “I didn’t even know that was a big shot,” he said after hitting four of his eight shots, two from behind the arc. “I was just shooting, just playing the game and letting it come to me. It does feel good to see things go my way.”

If it wasn’t enough for Langford to have arguably his the best performance of his young career, Dennis Schröder worked his way into the fray with what was arguably his most efficient and important performance as a Celtic. His 14 points led all bench scorers (and qualified as the second-most points by any Celtic on the night behind Jaylen Brown’s 17), and his plus-26 differential was the best on the team. With Tatum and Marcus Smart unable to get it going offensively, the ball found its way to Schröder; he’s been a playmaker elsewhere, so why not finally show that it can happen at a high level in Boston, too?

“Everybody was panicking seven games in,” Schröder said of the Celtics slow start. “But at the end of the day, we just try to get better day-by-day, try to keep improving until it really, really matters. We try to put the puzzle together and of course, we needed that one as well.”

Schröder’s slashing ability, if he can ensure it’s consistent, will be crucial to putting said puzzle together, and it’s safe to say he’s aware of it. Brown and Tatum are and always will be the primary scoring options on this iteration of the Celtics, but as teams begin to turn the bulk of their attention toward Boston’s two All-Stars, the additional scoring burden is likely to fall on Schröder. Marcus Smart has yet to prove that he’s reliable this season; Langford and Nesmith — more on him in a moment — are growing, but unfinished products. Al Horford can score, but can’t be expected to in bunches. Nights like last night quite simply must become routine for Schröder.

But Nesmith is perhaps the least obvious and most promising of this trio, at least when it comes to who can have his number called on any given night to provide a spark. His 13 points, as well as a plus-15 differential (third-best for Boston), were highs for him this season, one that has, to this point, been anything but encouraging. In fact, his 16-combined points from two games in Florida are the only points he’s scored this season — his other outing, four blanks and three DNP’s, don’t exactly bode well for what to expect from him moving forward. But perhaps this mini-explosion against the NBA’s best team can help.

“I’m always prepared,” Nesmith said postgame. “So whenever my name is called it’s not a shock to me just because I keep the same schedule every day. So whether I play or don’t play, I’m ready to play at all times.”

“I see it every day,” Schröder said of Nesmith. “You know how you wake up, put in work, and try to get better at things? It translated today and it showed that he was well prepared and that he’s ready whenever his name is called and it’s huge for him.”

That’s putting it as lightly as it can be put. Not only is it huge for Nesmith’s development, but Nesmith’s development — especially when happening in real-time and when paired with big nights from players like Schröder and Langford — will prove huge for the team overall. Jayson Tatum won’t shoot sub-40 percent from the field and sub-30 percent from three for 82 games, but he’s doing exactly that right now. Other players are stepping up at the perfect moments; that they happen to be the players Boston wants and needs to step up the most is just gravy.