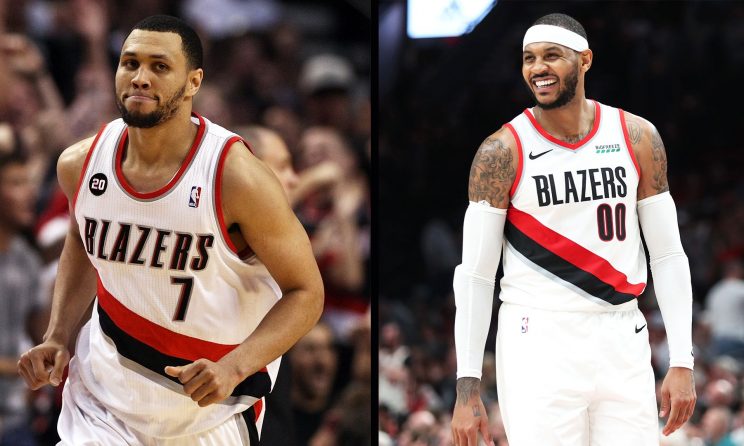 Carmelo Anthony wants Brandon Roy’s No. 7 and Trail Blazers fans think he should have it originally appeared on NBC Sports Northwest

In his five seasons in Rip City, Roy was everything the city of Portland embodied. A hard-nosed, maximum effort, talented player who ended up being a 3x All Star and the 2006 Rookie of the Year.

No one has taken the Portland Trail Blazers No. 7 jersey since he retired from the league in 2013.

He wore Jersey No. 3 for five games with the Minnesota Timberwolves and honestly, it looked very weird.

While the jersey isn’t retired and hanging in the rafters, the number is still sacred in the Trail Blazers organization.

It would take a special player to begin the conversation of “should this number become available?”

The 17-year, 10x All-Star was given new life in the NBA from Portland. He signed with the Trail Blazers in November, 2019. Melo averaged 15.4 points and 6.3 rebounds per game with Portland last season. After being called “washed” by so many, his sergeancy was contagious in Rip City and instrumental to Portland claiming the eight seed in the Western Conference playoffs during the NBA restart in Orlando, Florida.

This offseason, arguably the biggest offseason move President of Basketball Operations Neil Olshey made was re-signing Melo to Portland.

Melo began his career wearing No. 15 with the Denver Nuggets, but then wore No. 7 with his time in New York, Oklahoma City and Houston. When he signed with Portland, he chose No. 00.

“Listen, if Portland gives me No. 7 this year, I’ll be happy. I’ll be thrilled.” said Melo on Friday during training camp. “We need a petition for that. I need No. 7.”

Now with this new life, should the Trail Blazers gift Melo with jersey No. 7?

There’s no real debate, give Melo #7. If Portland can have two #30s (Gross and Porter), they can have two #7s, especially when they’re as great as B-Roy and Carmelo Anthony. #RipCity

I don’t think Carmelo Anthony wearing No. 7 takes away anything from what Brandon Roy did in Portland. I’m open to hearing why some people might think it does.

@trailblazers @ChrisDMcGowan I think its time and its okay to let @carmeloanthony have No.7, B-Roy will always be a legend in Portland. But Melo is a HOFer, he deserves it. Besides we can retire both players under the number in the future.