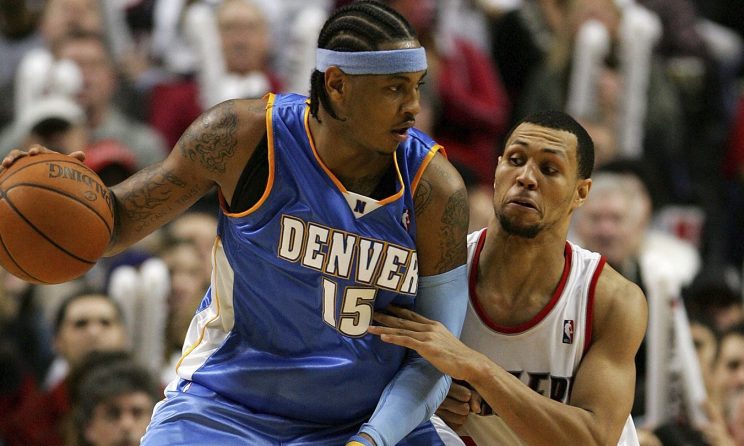 Carmelo Anthony has permission from Brandon Roy to wear No. 7 originally appeared on NBC Sports Northwest

Last week during his first media availability of the 2020-21 season, Carmelo Anthony publicly advocated for the Trail Blazers to allow him to wear number 7. The number he had worn since being traded to New York in 2011 until signing with Portland last season.

[RELATED]: Carmelo Anthony wants Brandon Roy’s No. 7 and Trail Blazers fans think he should have it

“Listen, if Portland gives me No. 7 this year, I’ll be happy. I’ll be thrilled.” said Melo on Friday during training camp. “We need a petition for that. I need No. 7.”

But last season, Portland did not allow Anthony to choose seven as his number when he was signed midseason in October 2019. Presumingly for Brandon Roy who last wore the number for the Trail Blazers before he was forced to medically retire.

Despite only playing five seasons for Portland, Roy became one of the most beloved Trail Blazers of all time, being a three-time All-Star, a two-time All-NBA pick, the Rookie of the Year, and leading the franchise out of the lowest point in team history.

Many fans have wanted Roy’s number to be retired but no move has been made by Portland, as of yet.

However, what does The Natural himself think?

Roy told Jason Quick of The Athletic the Blazers should let Carmelo wear No. 7.

The former Trail Blazer went on to tell a story of how after a Christmas Day duel in 2009, where Roy scored 21 and Melo scored 32, Roy asked him if he would take a picture with Roy’s cousin, Juleesa Johnson.

“I asked Melo if my cousin, who was sick from cancer, could shake his hand and take a picture with him,” Roy said.

“He said, ‘Of course.’ Made her night. He was her favorite player.”

Quick also reported the Trail Blazers “have no plans to retire any number.”