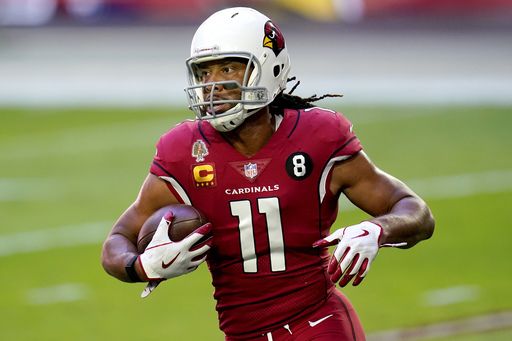 The Latest on the effects of the coronavirus outbreak on sports around the world:

Arizona Cardinals wide receiver Larry Fitzgerald has been activated from the Reserve/COVID-19 list after a two-game absence.

His presence will be welcome as the Cardinals try to snap a three-game losing streak when they face the New York Giants on Sunday. Arizona has a 6-6 record and is two games behind the Los Angeles Rams and Seattle Seahawks for the top of the NFC West.

Texas says all football activities for the No. 23 Longhorns remain on pause ”out of an abundance of caution” after the school previously announced that three players and two staff members tested positive for COVID-19 following a game at Kansas State.

Texas (6-3, 5-3 Big 12) is scheduled to play at Kansas on Saturday. That game had originally been set for Nov. 21 before it was postponed due to virus issues within the Jayhawks’ program.

The Boilermakers are scheduled to renew their rivalry with No. 8 Indiana on Saturday in Bloomington, Indiana. The Hoosiers won last year’s game in overtime to reclaim the Old Oaken Bucket.

Indiana (6-1) already has locked up the No. 2 seed in the Big Ten East and has met the minimum standard of playing six games to be eligible for the conference championship game.

Purdue (2-4) has lost four straight and has had some issues with COVID this season. Coach Jeff Brohm missed the season opener after testing positive and all-conference defensive end George Karlaftis sat out the last two games after also testing positive. The Boilermakers also had their Week 3 game at Wisconsin canceled because of a COVID outbreak.

The NFL says there were 18 new confirmed positive COVID-19 tests among players and 27 among other personnel in the latest round of testing, which concluded Saturday.

Since testing began in August, 173 players and 297 other personnel have been confirmed positive cases out of more than 757,000 tests given.

No. 7 Houston’s men’s basketball team has paused all team activities and postponed its two games this week because of positive COVID-19 tests and contact tracing.

The Cougars were scheduled to host Sam Houston State on Wednesday night and Rice on Saturday.

Michigan has scheduled a men’s basketball game against Toledo to replace the one against North Carolina State that was canceled.

The Wolverines were supposed to play the Wolfpack on Wednesday night in the ACC/Big Ten Challenge, but that was called off because of COVID-19 concerns involving N.C. State. Now Michigan is set to host Toledo instead.

The schools are about 50 miles apart, but these programs haven’t played since 1983, when Michigan won 55-52.

Michigan’s football team is relegated to limited workouts for a second day in a row due to a COVID-19 outbreak within the program.

The Wolverines are scheduled to play No. 3 Ohio State on the road on Saturday, but there are increasing doubts about whether they will be medically cleared to compete after canceling last weekend’s game against Maryland.

Michigan coach Jim Harbaugh and some of his players were scheduled to be on Zoom calls with reporters on Tuesday, but those media availabilities have been postponed.

The Big East Conference has switched a couple of opening night men’s basketball games because of COVID-19-related concerns.

St. John’s is now scheduled to visit Seton Hall on Friday at the Prudential Center in Newark, New Jersey. The game will start at 4:30 p.m. Eastern and be broadcast on CBS Sports Network.

St. John’s was originally scheduled to welcome UConn back into the Big East on Friday in Storrs, Connecticut, and Seton Hall was to play host to DePaul. But UConn and DePaul are both dealing with COVID-19 issues.

DePaul announced Tuesday it was pausing all team activities this week following positive COVID-19 tests involving its program, two days after a similar announcement from UConn.

Also, the start time of Friday’s Villanova-Georgetown game has been changed from 5 p.m. to 7 p.m.

The program paused nearly three weeks ago after positive tests were revealed, the team was quarantined for 14 days and has since completed the protocol process.

Bozzella remains in quarantine. There is no timetable for his return. Assistant coach Lauren DeFalco will serve as interim head coach during Bozzella’s absence.

East Tennessee State has postponed Tuesday night’s men’s basketball game at UNC-Asheville hours before tipoff due to COVID-related issues within the Buccaneers’ program.

ETSU announced the postponement Tuesday morning. The Bucs also had their Dec. 18 home game against UVA-Wise postponed when that program postponed its final five games this month in accordance with COVID-19 protocols. The Bucs will try to reschedule both games.

The regular-season football finale between No. 7 Cincinnati and No. 18 Tulsa has been canceled due to COVID-19 cases and contact tracing within the Bearcats’ program.

The American Athletic Conference made the announcement on Tuesday.

The teams are scheduled to play in the AAC title game on Dec. 19. Both teams have perfect league records.

The winner of Saturday’s game in Tulsa would have hosted the title game. Now, the host will be the team that’s ranked higher in the College Football Playoff rankings being released Tuesday, per the American’s tiebreaking procedure. Last week, Cincinnati was No. 7 and Tulsa was No. 24.