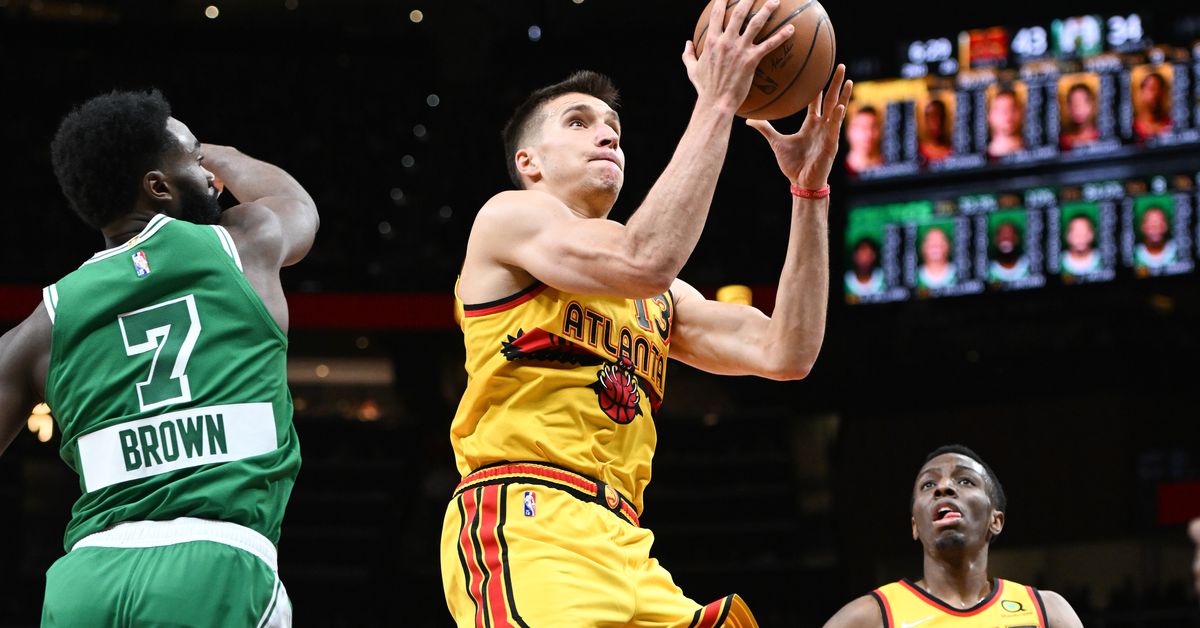 Call it what you want – the disappointment bowl, the clash-of-the-underachievers, the mediocrity matchup – tonight’s game featured two teams that haven’t fulfilled preseason expectations. Recently, they’ve each flipped their fortunes, with Boston winning seven of their last ten and Atlanta entering the game on a five-game win streak.

And tonight, the Hawks played dominating basketball whenever the Celtics got close, winning the game 108-92 and extending their winning streak.

The opening five minutes had more intensity than a typical late-January game. De’Andre Hunter – Atlanta’s defensive ace – opened the game with a steal and proceeded to draw a foul on Jayson Tatum. Then John Collins had an outstanding block on Tatum, reminiscent to Bam Adebayo’s block from the 2020 Eastern Conference Finals.

We’ve grown accustomed to the Celtics starting games with low energy, but tonight, that wasn’t the case. Marcus Smart opened the scoring with a nifty and-one drive, and Jaylen Brown scored eight early points, attacking the basket at will. The game was tied at 11 at the seven-minute mark.

When the benches entered the game, Atlanta had the clear advantage with Lou Williams, Bogdan Bogdanovic, and Danilo Gallinari. Atlanta ended the quarter on a 17-4 run, punctuated by back-to-back corner threes from Williams. The Hawks led 32-20, Tatum didn’t connect on any of his five field goal attempts, and the Celtics shot 31 percent with five turnovers.

Boston couldn’t cut into the lead at the beginning of the second quarter. After Tatum got blocked for the third time of the night, Gallinari put a crafty behind-the-back move on Aaron Neismith (who I was happy to see getting some early playing time, though it didn’t pan out well) and nailed the ensuing elbow jumper. The Celtics trailed 41-27 and Udoka called timeout.

Boston’s 7-0 run was answered with an Atlanta 6-0 run. Josh Richardson cut the lead to 8 after connecting on a deep ball, then with 2:30 remaining, he stole an inbounds pass, converted on the layup, and cut the lead to 52-47.

But the Hawks responded with firepower, scoring 10 points over the next 90 seconds, and they led 62-47 at the half. You wouldn’t know Atlanta had the 28th ranked defense, as they had seven blocks and six steals, holding Boston to 33% shooting and 2 of 16 from three. The only reason it wasn’t more of a blowout? The Celtics grabbed eight offensive boards and made 15 of 17 free-throws.

Atlanta opened the second half looking for John Collins. He hit an impressive running hook (a la Magic Johnson in 1987) then nailed two contested midrange jumpers. Smart connected on two early threes, then found a cutting Tatum, who converted the layup and got fouled. At the six-minute mark, Smart again found Tatum, this time for a three. A Collins putback dunk gave the Hawks a 74-66 lead with five minutes remaining in the third.

At the three-minute mark, Tatum hit a step back three, cutting Atlanta’s lead to 74-71. Then Onyeka Okongwu got an easy tip-in, and on the ensuing inbounds pass, Richardson elbowed Trae Young (who was on the floor, trying to stand up) and got called for a technical foul.

The Celtics could have fallen apart, but they stayed competitive. Brown had a handful of strong drives, then Dennis Schroder found a cutting Romeo Langford, who converted the layup and cut the lead to three. Boston outscored Atlanta 30-18 in the quarter, and they trailed 80-77 going into the fourth.

The teams traded baskets to open the fourth, and the Celtics got within one, but the Hawks went up 90-84 after a Bogdanovic step-back three on Robert Williams. A few possessions later, again isolated on Williams, Bogdanovic took him to the hole and hit a scoop layup. A Clint Capela block on Schroder led to a Young three, and Atlanta went ahead 97-86 with 5:51 to play.

Boston didn’t score for the next three minutes amidst an Atlanta 18-2 run. Ime Udoke waved the white flag at the 2:56 mark. Collins and Young each scored 21 while Boganovic added 14. Boston had no answer for Gallinari, as he hit all five of his shots, scoring 14 points and finishing +19 for the game.

The Celtics only shot 35 percent from the field and finished 7/36 from deep. Their 15 assists were the second lowest total of the season. The Jays finished with a combined 46 points and 12 turnovers. Their bench was outscored 45-13. Boston will look to bounce back tomorrow night as the travel to New Orleans for a 7:00 tip.

For more postgame coverage of the Celtics loss to the Hawks, tune into the the Garden Report Postgame Show LIVE on clnsmedia.com right after the game. Join A Sherrod Blakely, Bobby Manning, Josue Pavon, Jimmy Toscano and host John Zannis for a full breakdown. Plus, the guys will discuss the team’s shooting struggles.