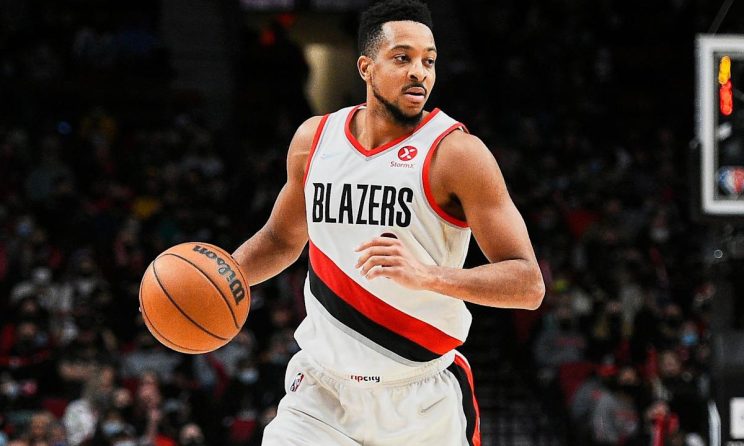 C.J. McCollum is averaging 20.6 points and 4.5 assists for the Blazers.

Portland Trail Blazers guard CJ McCollum was diagnosed with a pneumothorax (collapsed right lung) and will be out indefinitely, the team announced on Tuesday.

McCollum sustained the injury in the fourth quarter of Portland’s 145-117 loss to the Boston Celtics on Saturday. The veteran guard did not play in the Blazers’ home loss to the Los Angeles Clippers on Monday and did not travel with the team to San Francisco for Wednesday’s game against the Golden State Warriors.

McCollum “will be further evaluated before a prognosis is determined and his status will be updated accordingly,” the team said in a statement.

Pneumothorax “occurs when air leaks into the space between your lung and chest wall. This air pushes on the outside of your lung and makes it collapse,” according to mayoclinic.org. “A pneumothorax can be a complete lung collapse or a collapse of only a portion of the lung.

COVID UPDATE: Unvaccinated players won’t be allowed to travel or play in Canada

STAY IN THE KNOW: Subscribe to our newsletter and never miss a moment

“A pneumothorax can be caused by a blunt or penetrating chest injury, certain medical procedures, or damage from underlying lung disease. Or it may occur for no obvious reason.”

McCollum had X-rays of his chest following Saturday’s game, but the team planned additional evaluation, which discovered the collapsed lung.

Certified athletic trainer Jeff Stotts, who maintains an extensive database of NBA injuries, wrote, “The rate of recovery following a pneumothorax is linked to the size of the injury. If it is large, a chest tube may be necessary to remove the air. A pneumothorax is more common in the NFL with players like Drew Brees and Rob Gronkowski sustaining the injury in recent seasons.

“While far less frequent in the NBA, there are several examples. During the 2008-09 season forward Gerald Wallace fractured his fifth rib which resulted in a collapsed lung. The injury was significant and required a chest tube to drain the air from around Wallace’s injured left lung. Houston big man Terrence Jones also suffered the combination of rib and lung injuries during the 2014-15 season. Neither player missed a considerable amount of time as Wallace was sidelined for seven games and Jones was back in six.”