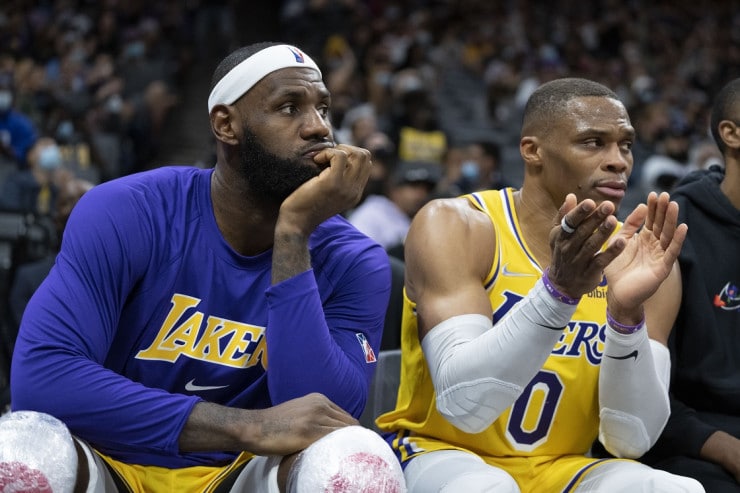 The Phoenix Suns will head on the road to the Staples Center in Los Angeles, California for a Western Conference clash versus the Los Angeles Lakers.

Can the new-look Lakers bounce back with a win at home against Phoenix on Friday evening?

At Basketball Insiders, we get all of our game lines and information from the best betting sites. All of the game lines that are featured below are taken from Bovada.

Despite signing Landry Shamet and Mikal Bridges to contract extensions, Phoenix decided not to re-sign former No. 1 overall pick DeAndre Ayton before the start of the regular season. With the Suns vying for a second straight trip to the NBA Finals, Ayton’s murky contract situation could become a looming distraction in Phoenix. The decision to let Ayton become the first No. 1 overall pick since 2007 to hit restricted free agency is a massive gamble for both sides, according to ESPN’s Kevin Pelton.

On the other side, the Lakers are still trying to piece things together after bringing in several new additions in the offseason. LeBron James and Anthony Davis were the only two Lakers’ to score in double-figures during their season-opening loss to the Golden State Warriors. Russell Westbrook had a disappointing Lakers’ debut, finishing with eight points, five rebounds, and four assists in 35 minutes.

Phoenix has a fully healthy roster heading into its matchup on the road at the Staples Center on Friday night.

Meanwhile, the Lakers come into the second game of the regular season with a couple of reserve guards on the injury report. Veteran Wayne Ellington and guard Kendrick Nunn are both day-to-day heading into Friday’s contest. Ellington is nursing a hamstring injury while Nunn missed the season-opener with an ankle injury.

Suns fall asleep in the second half of loss versus Denver

Phoenix couldn’t keep up with the Denver Nuggets in a 110-98 loss on Wednesday night. Despite leading by seven points at halftime, the Suns were outscored by 19 points in a decisive second half. Mikal Bridges led Phoenix in scoring with 16 points while Chris Paul had 15 points and 10 assists for the Suns in the loss.

Perhaps more concerning for Phoenix, shooting guard Devin Booker got off to another slow start from behind the 3-point line on Wednesday. Booker shot just 3-for-15 and 2-for-7 from 3-point range in an off-night against the Nuggets. Since shooting 38.3 percent from beyond the arc in 2017-18, Booker has struggled to find his stroke from long-range and connected on just 34.0 percent from his attempts from distance last year.

Los Angeles had no answers for Golden State’s ball movement on Tuesday evening, falling short 121-114 at home on opening night. LeBron James led the Lakers with 34 points, 11 rebounds, and five assists, while Anthony Davis chipped in 33 points and 11 boards in a losing effort for L.A. James led the Lakers with five made 3-pointers but the rest of the team shot just 10-for-31 from long-range (32.2 percent) on the night.

Both James and Davis had to reassure Westbrook of his fit with the Lakers after Tuesday’s loss. Westbrook was visibly frustrated with his performance against the Warriors and kept his media session as short as possible, talking to reporters for less than three minutes. The Lakers’ point guard won’t, he will be faced with some tough individual matchups in the coming days. He will get a dose of veteran point guard Chris Paul on Friday before matching up with third-year star Ja Morant in the final game of L.A.’s three-game homestand on Sunday.

Outside of James and Davis, the Lakers couldn’t get much of anything going against the Warriors. In fact, L.A.’s bench was outscored 55 to 29 while Westbrook and fellow newcomer Carmelo Anthony each scored fewer than 10 points in the loss. While the Suns stumbled in the second half of their season-opening loss versus Denver, Phoenix flashed a newfound dimension to its offense, stretching Ayton out to the 3-point line. Jae Crowder and Devin Booker combined to shoot just 2-for-12 from beyond the arc in the loss, something like won’t likely repeat itself on Friday night. With Westbrook and the Lakers still getting acclimated to one another, look for Phoenix to cover the spread on the road at the Staples Center on Friday night.

Want to get NBA betting odds from the best online gambling sites?

Take the Suns to win on the money line at Bovada.