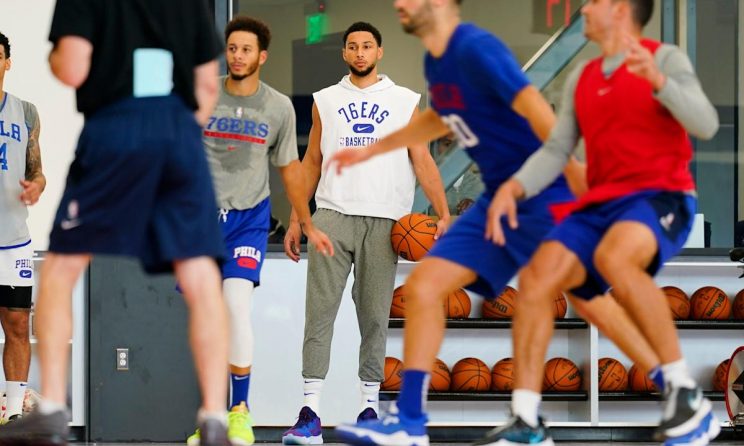 Ben Simmons ripped a page right out of the malcontent’s playbook.

Holding out as a strategy to get traded isn’t effective in the NBA.

You know what has worked in recent seasons for the unhappy player who wants a trade? Showing up, acting out, causing problems for the team and creating the kind of distraction no team wants.

There’s the Jimmy Butler aggressive-aggressive stance. A month after Butler went all “Pulp Fiction” Jules on the entire Minnesota Timberwolves organization at a practice at the start of the 2018-19 season, he was traded.

There’s the James Harden passive-aggressive mode, showing up to Houston’s training camp out of shape and then voicing a public no-confidence vote in the franchise. He was traded shortly after.

Ben Simmons (center right) has not been a particularly active participant since returning to practice.

Simmons’ holdout didn’t yield a trade so he showed up to practice with unbridled ambivalence: he showed no engagement at Tuesday’s practice, compelling Sixers coach Doc Rivers to kick him out of practice and the franchise to suspend him for the season-opener against New Orleans on Wednesday.

On Thursday, Simmons skipped an individual workout session at the Sixers’ practice facility, a person with knowledge of the situation told USA TODAY Sports. The person requested anonymity because he was not authorized to publicly discuss Simmons’ situation with the team.

There was really never a chance for reconciliation but even if there was a 1% chance the Sixers could make it work, All-Star center Joel Embiid nuked that, telling reporters, “At the end of the day, our job is not to babysit somebody. We get paid to produce on the court, go out, play hard, win some games. That’s what we get paid for. We don’t get paid to come out here and try to babysit somebody. That’s not our job. I’m sure my teammates feel that way.”

Embiid added, “At this point, I don’t care about that man. He does whatever he wants. … Our chemistry has been excellent despite everything that’s been happening the last few months. Like I said, I don’t really care.”

Now what? The Sixers can’t bring Simmons back to practice nor can they have him on the bench in any capacity for Friday’s home-opener against Brooklyn, which is without point guard Kyrie Irving who is sidelined by the team because he won’t get the COVID-19 vaccine.

SIMMONS SAGA: What we know: The latest on disgruntled Ben Simmons’ suspension from Philadelphia 76ers

In the interest of all sides, the Sixers have no choice but to keep Simmons – who has lost more than $1 million in salary because of missed practices, games and fines – away from the team while president of basketball operations Daryl Morey searches for a trade.

That’s part of the problem, too. Morey can’t find the trade he wants, and while Minnesota and Houston acted quickly, Morey has a championship in mind and he’s not giving Simmons away just to get rid of the problem. He wants relative equal talent in return, which could prolong the situation.

Another part of the problem that rankles executives around the league? Simmons wants out just one season into a five-year, $177.2 million contract. Including this season, he has four years and $146.6 million remaining. It’s rare that a player wants out so early.

“It’s something you never like to see as a league,” NBA Commissioner Adam Silver said on ESPN’s NBA Today. “What people are suggesting is that this early in his contract, it’s highly unusual to be holding out in the way he is. But again, both sides have rights. As a result of holding out, he’s (lost) some combination of not being paid and fined on top of that. So, it’s an unfortunate situation.

“Obviously, there’s a reason why we have contracts in this league. If everybody just complied according to handshakes, you wouldn’t need those documents. When you have situations like this people of course turn to the contract and expect players to honor it from their standpoint and players expect teams to honor contracts.”

But this is also a unique situation in which Simmons was thrown under the bus by Rivers and Embiid following Philadelphia’s second-round loss to Atlanta in the 2021 playoffs.

A combination of factors led to this.

Maybe on another team, Simmons would’ve been traded by now. But this is Morey, who doesn’t want to get burned on a bad deal for a team that believes it can win a championship with the right player(s) in a trade for Simmons.

He doesn’t have that deal, and while not ideal, both sides have a high threshold for an extended circus.