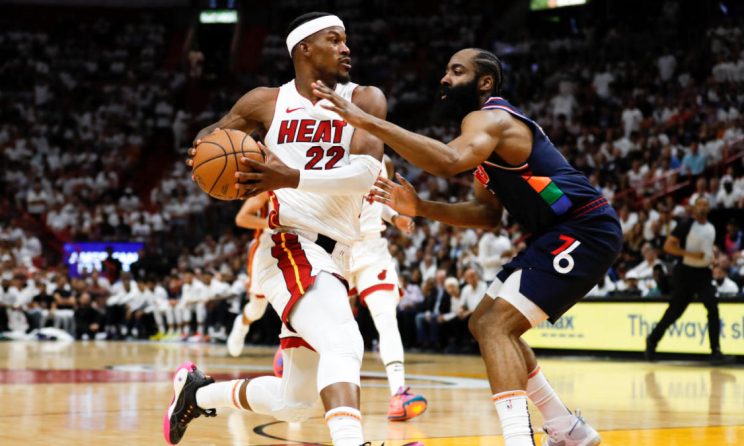 The Philadelphia 76ers host the Miami Heat on Friday evening. Philadelphia trails Miami by a 2-0 margin in the second round 2022 NBA Playoffs series, leaving the 76ers in a desperate position at home. Miami won the first two games in decisive fashion with Joel Embiid sidelined for Philadelphia, and Embiid (facial fracture) is listed as doubtful for the 76ers. Kyle Lowry (hamstring) is questionable to play after missing the last four games and he’s one of six Heat players listed as questionable for Friday.

Caesars Sportsbook lists the Heat as one-point favorites on the road, and tip-off is scheduled for 7 p.m. ET. The total number of points Vegas thinks will be scored, or the Over-Under, is 210.5 in the latest Heat vs. 76ers odds. Before you make any NBA predictions with the Heat vs. 76ers match-up, be sure to see the NBA predictions and betting advice from SportsLine’s proven computer model.

The SportsLine Projection Model simulates every NBA game 10,000 times and has returned well over $10,000 in profit for $100 players on its top-rated NBA picks over the past three-plus seasons. The model enters the third full week of the 2022 NBA playoffs on a stunning 86-58 roll on all top-rated NBA picks, returning over $2,100. Anyone following it has seen huge returns.

Now, the model has set its sights on Sixers vs. Heat, and just locked in its picks and NBA playoff predictions. You can head to SportsLine now to see the model’s picks. Here are several NBA odds and betting lines for Heat vs. Sixers:

Why the Heat can cover

Miami is known for its stingy defense, and the Heat have been dominant on that end of the floor in the playoffs, holding opponents to 103.8 points per 100 possessions. The Heat are also quite potent on offense, however, and star power is part of the calculus. Jimmy Butler averaged 21.4 points, 5.9 rebounds, and 5.5 assists per game in the regular season, and he has upped that production to 26.5 points, 7.7 rebounds, and 6.0 assists per game on strong efficiency in the playoffs. Bam Adebayo is enjoying big-time success in this series, averaging 23.5 points and 10.5 rebounds per game while shooting 71.4 percent, and Tyler Herro is the Sixth Man of the Year after averaging 19.1 PPG as the NBA’s leading reserve scorer in 2021-22.

Why the 76ers can cover

Philadelphia has clear strengths on offense, and the Sixers are playing well on that end of the floor in the playoffs. During the regular season, the 76ers ranked in the top four of the NBA in free throw creation, free throw accuracy, turnovers per game and live-ball turnovers per game. In the postseason, Philadelphia is scoring 115.4 points per 100 possessions, an elite figure, and the 76ers are even better at home, scoring more than 1.21 points per possession in playoff home games. The 76ers are shooting 47.6 percent from the floor and 36.2 percent from 3-point range in the playoffs, and the free throw line continues to be an area of strength.

Philadelphia has elite marks in free throw creation (24.3 attempts per game) and free throw accuracy (85.6 percent) in the playoffs. On the other end, the 76ers are stingy in defending the 3-point line, allowing the opposition to make only 11.4 triples per game in the regular season. Miami also ranked No. 28 in the NBA in both turnovers per game and points in the paint per game in 2021-22, with Philadelphia landing above the NBA average in assists allowed and free throw attempts allowed.

How to make Heat vs. 76ers picks

SportsLine’s model is leaning over on the total, projecting 215 combined points. The model also says one side of the spread hits in well over 50 percent of simulations. You can only see the model’s Heat vs. 76ers picks at SportsLine.