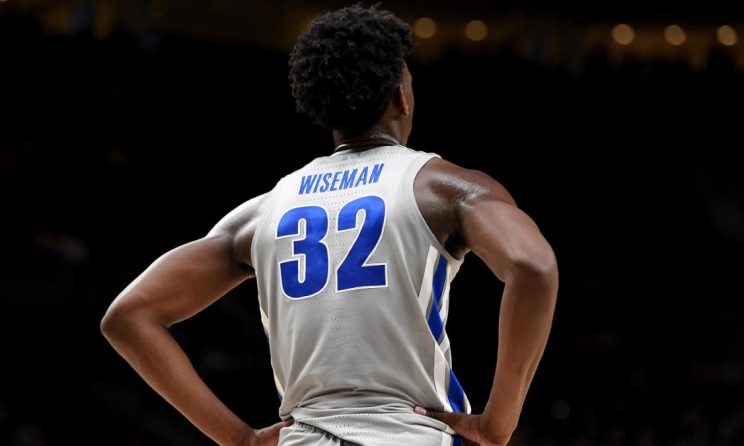 The 2020 NBA Draft is just over one week away, but even with the big night just around the corner, it’s still unclear how things will play out. There’s no consensus No. 1 prospect, and both the Minnesota Timberwolves and Golden State Warriors — drafting first and second overall, respectively — are open to trading their picks.

That being said, we aren’t totally in the dark. The latest bit of information indicates Memphis big man James Wiseman is rising up draft boards and may go No. 1 overall no matter who ends up making the pick. The Charlotte Hornets are apparently one of the teams after him, according to Jonathan Wasserman of Bleacher Report:

Multiple sources have told Bleacher Report the name they keep hearing now for the Timberwolves is James Wiseman. “Some within the Golden State Warriors think Wiseman is going No. 1, whether Minnesota keeps the pick or not,” one source plugged into the conversation said.

It’s an intriguing development given the obvious questions about whether Wiseman and Karl-Anthony Towns can play together.

However, sources also say the Charlotte Hornets “want Wiseman badly,” a plausible belief given the team’s established backcourt and need for a big man.

Standard acknowledgment that as always, we have to tread lightly with these pre-draft rumors. We never know who’s leaking them, or for what purpose, so while they’re interesting to consider, they shouldn’t be treated as gospel.

Wiseman has always been projected to be a top pick in this draft and has widely been grouped among the top three prospects along with LaMelo Ball and Anthony Edwards. Last month, a report indicated that his combination of size, athleticism and defensive abilities make him one of the “safest” players in the class.

That he hasn’t previously gotten much buzz about being the top pick is more due to the poor fit with Minnesota than his potential. The Timberwolves already have Karl-Anthony Towns, and Wiseman is reportedly not interested in playing there. “Wiseman doesn’t even want to do anything” with the Wolves, ESPN’s Brian Windhorst said in a recent podcast.

The Hornets, meanwhile, are thin in the frontcourt, and Wiseman makes a lot more sense there. They currently have the No. 3 overall pick, but if they are truly locked in on Wiseman, it could be worth jumping up to No. 1 to make sure they get him. At the very least, it’s a possibility to keep in mind if we start hearing more whispers about the Hornets’ interest in Wiseman.