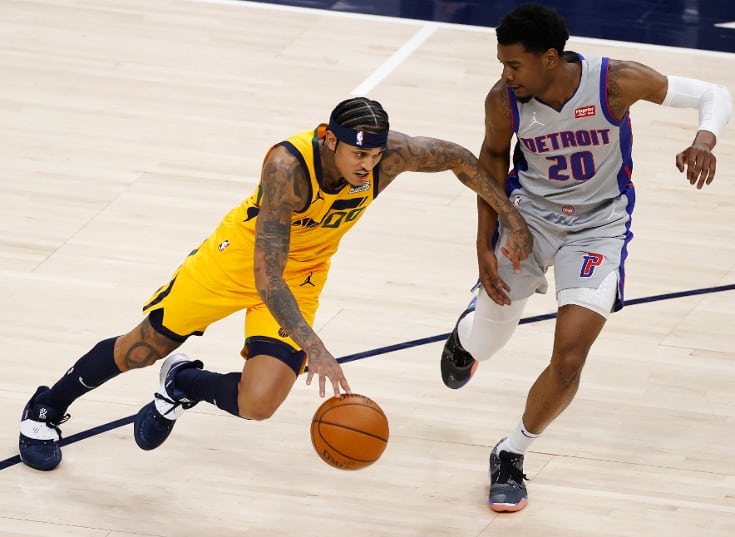 In Monday night’s interconference contest, the Utah Jazz (28-12) are playing the Detroit Pistons (8-30) at Little Caesars Arena. Will the Pistons earn their first head-to-head win versus the Jazz since Jan. 25, 2016?

Furthermore, regarding these teams’ betting statistics, the Jazz are 19-21 against the spread in the 2021-22 NBA regular season, while the Pistons are 18-20 against the spread. The tip-off time for this matchup is 7 p.m. ET. To watch this game live, the available television channels include AT&T SportsNet Rocky Mountain, Bally Sports Detroit, NBA League Pass and Root Sports Northwest. Referring to Land of Basketball’s database, these two competing teams have faced off 102 times during the regular season all-time. Overall, Utah is 67-35 versus Detroit.

In the previous 10 meetings, the Jazz are a flawless 10-0 against them. On Feb. 2, 2021, the last time these teams met during the regular season, Utah won 117-105 at Vivint Arena. On another subject, per multiple sources, the Pistons are set to acquire forward Bol Bol from the Nuggets. In exchange, Denver will receive Rodney McGruder and a 2022 second-round pick via the Nets. Over the course of two seasons, Bol Bol has averaged 2.7 points, 1.2 rebounds and almost 1.0 assist per game. He was selected 44th overall by the Heat in the 2019 NBA Draft. Though, he was immediately traded to the Nuggets on draft night.

Confirmed that the #Pistons are getting Bol Bol from the #Nuggets for Rodney McGruder and a 2022 second-round pick via Brooklyn.

Anyways, on Saturday, in the Jazz’s 125-113 away loss versus the Pacers, guard Donovan Mitchell scored a team-high 36 points in 37 minutes on the court. Forward Bojan Bogdanovic ended his performance with 21 points, 6.0 rebounds and 1.0 assist in 37 minutes played as well. In the fourth quarter, Indiana outscored them 35 to 27. The Jazz are in a slump defensively; they have allowed at least 120 points in back-to-back games.

Per ESPN’s Basketball Power Index, the Jazz have a 74.8% probability of winning.

On the other side, in the Pistons’ 97-92 home win over the Magic on Saturday, forward Hamidou Diallo led his team in scoring with 17 points in 29 minutes spent on the court. Saddiq Bey and Trey Lyles each closed out their performances with 16 points, too. Lyles also added one more double-double to his career total, amassing 13 rebounds and 2.0 assists in 28 minutes played. In the fourth quarter, Detroit outscored them 24 to 19.

Besides studying the handle, for valuable betting trends, the Jazz are 3-10 ATS in their past 13 performances. Needless to say, they are 15-5 straight up in their last 20 contests. Next, Utah 7-2-1 ATS in the team’s previous 10 matches versus Detroit, and the Jazz are 10-0 SU against them in their past 10 games. More importantly, Utah is 5-0 SU in the team’s last five head-to-head contests versus Detroit at Little Caesars Arena. Finally, they are 3-7 ATS in their previous 10 contests.

As for the Pistons, they are 4-16 SU in their last 20 performances. Also, the total has gone under in four of their past six games. Next, the total has gone under 10 of Detroit’s previous 13 matches versus Utah. And, the Pistons are 1-5 ATS in their last six matches against Western Conference opponents. Taking all of this information under consideration, contemplate picking the Jazz to win, but the Pistons will cover the spread. If this is your first time placing a bet, read our handicap betting guide.

Pick the Jazz to win, the Pistons will cover the spread and the total will go over 223. Utah is a 11-point favorite on the road with BetOnline.