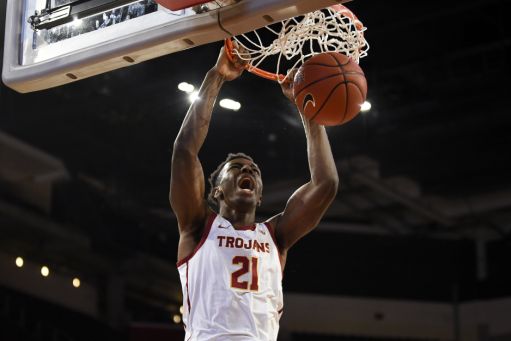 A look at things to watch this week in Pac-12 Conference basketball:

GAME OF THE WEEK: Southern California at No. 12 Oregon, Thursday. The Trojans have yet to crack the AP Top 25 this season, but are one of the Pac-12’s most talented teams and are tied with Stanford atop the conference at 4-1. USC (15-3) has one of the conference’s most productive big men in Onyeka Okongwu, who averages 16.9 points and 8.7 rebounds, and a pair of proven scorers in Jonah Matthews and Nick Rokocevic. The Ducks climbed to No. 4 in the AP Top 25, but dropped to No. 12 after a surprising loss to Washington State. Oregon still scores in bunches and has one of the front-runners for Pac-12 player of the year in senior guard Payton Pritchard. This one should be fast paced, back and forth, and a whole lot of fun to watch.

LOOKING AHEAD: Arizona bounced back from a lost trip to Oregon with resounding wins over Utah and No. 23 Colorado last week, moving the Wildcats back into the AP poll at No. 22. Arizona typically plays Arizona State the final game of the regular season, but the schedule this year has the Wildcats and Sun Devils playing their rivalry game on Saturday. Arizona won the first meeting in a rout, 75-47, but that was at McKale Center. This one will be Desert Financial Arena, which should be hopping for the rematch. Another rivalry game will take place in Berkeley on Sunday, when California hosts Stanford. The Cardinal won the first meeting 68-52 at Stanford.

INSIDE THE NUMBERS: Colorado’s Tyler Bey and Oregon State’s Kylor Kelley were among the 15 players named to the Naismith Trophy National Defensive Player of the Year mid-season team. … Utah has the Pac-12’s second-longest active winning streak against one opponent with 11 straight wins heading into Saturday’s game against Washington State. … USC’s 21-point comeback in its 82-78 win over Stanford last week was the largest second-half comeback in Pac-12 history.

PLAYER TO WATCH: CJ Ellerby, Washington State. The Cougars’ sophomore forward had quite a week while leading his team to its first home sweep of the Oregon schools since 2011. Ellerby averaged 23.5 points, 11.5 rebounds and 4.0 assists in the two games to earn Pac-12 player of the week honors.

ON THE WOMEN’S SIDE: One of the biggest rivalries in women’s college basketball will feature a pair of games between Top-10 teams. No. 4 Oregon and No. 7 Oregon State a home-and-home series this week, Friday in Eugene and Sunday in Corvallis. It will be the second and third times the rivals are ranked in the AP Top 10 when facing each other. … Another rivalry game takes place in Tucson on Saturday, when No. 18 Arizona hosts No. 16 Arizona State. It will be the first time in rivalry history both teams will be ranked. Sun Devils coach Charli Turner Thorne is vying to become the fourth coach in Pac-12 history to reach 500 career wins.