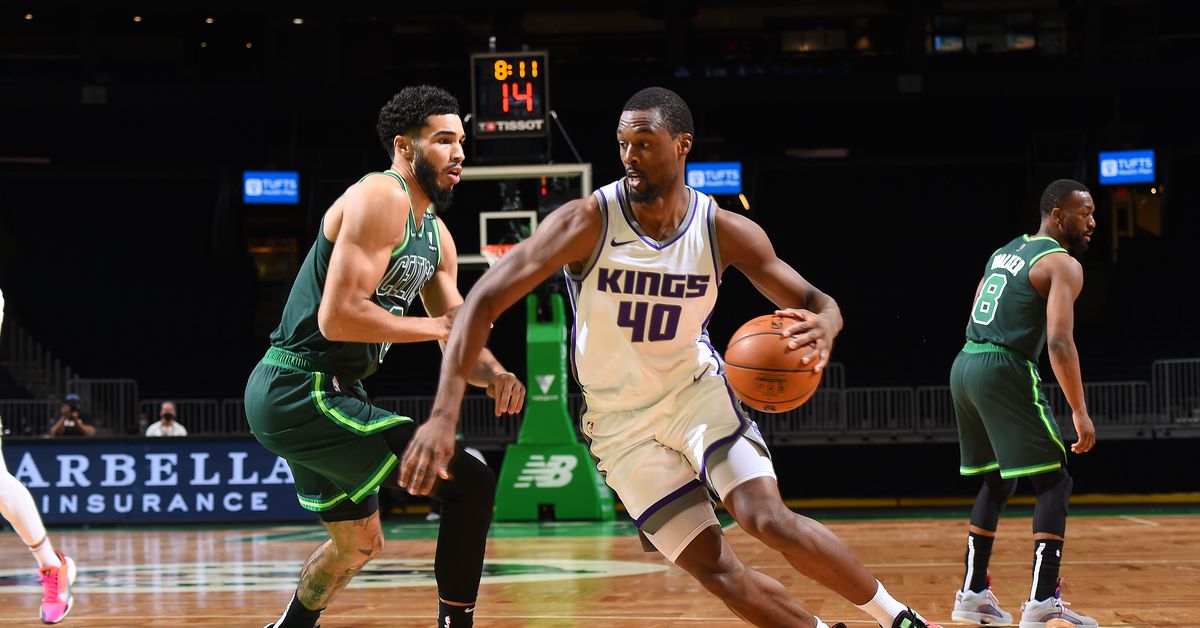 If you add up all the reporting around the Boston Celtics approaching the trade deadline, the team has different paths they can go down. One is a simple deal, or set of deals, to shed some salary and avoid the luxury tax for this season. Another has Boston adding some help for a playoff push.

A month ago, it would have seemed the first path was a necessity. After a 10-6 January, it now seems like the second path is realistic.

But to ask the age-old question… Why not do both?

What if we told you that Boston could both dodge the tax, while adding help for a playoff push? And it would also be adding some help (and salary!) beyond this season as well? Is that something you might be interested in? If so, then do we have the deals for you!

Without getting crazy and suggesting Boston should acquire an All-Star on an incredible value contract, here’s two trade proposals that help the Celtics live in both worlds, while maintaining the ability to have the exact same summer of 2022 that they might be lining up for anyway.

Why would the Celtics do this deal? Boston gets a replacement for both Schroder and Richardson in Powell. Brown is really just a throw-in to make the math work for Chicago, but the Celtics would get a look at him for a few months before he’s a restricted free agent in July.

But Powell is the real get here. He’s a talented scorer, who has experience coming off the bench or starting. Most importantly, he’s used to playing off the ball along high-usage players. Powell has done so in both Portland and Toronto. And Powell is signed through the 2025-26 season at what looks to be a reasonable contract. He fills a lot of holes for the Celtics now, and for years to come.

Why would the Bulls do this deal? Chicago is rumored to be looking at Dennis Schroder for some backcourt depth. The Bulls are without both Lonzo Ball and Alex Caruso for a while. Schroder would come in as a low-cost, short-term option for their bench. Until Ball and Caruso are back, he’ll work well with Ayo Dosunmu and Coby White off the bench.

It’s essentially a get-by kind of deal for the Bulls, without sacrificing much value.

Why would the Trail Blazers do this deal? Portland is in a tricky spot. Like Boston, they want to avoid the tax. Also, like the Celtics, the Blazers seem hellbent on pushing for the playoffs. And that’s with Portland facing much more difficult circumstances to pull off a postseason trip.

Now, the question to ask is: Is this the best Portland can do for Powell? Richardson is a step down, but not a drastic one. He’ll keep the Trail Blazers competitive as a bench wing, or even as a starter, if they need.

But the main reason Portland does this is to shed the $90 million in salary Powell is owed through 2025-26. The Blazers need to re-sign Anfernee Simons this summer after his breakout season. They already have over $380 million committed to Damian Lillard and C.J. McCollum. You can’t carry $470 million to three guards AND re-sign a fourth one for a deal that will likely start around at least $15 million per season.

This deal also gets Portland out of the tax this season, which is a stated goal they have at the deadline. It’s mostly financially motivated, but this deal would clean up the cap sheet considerably for the Trail Blazers moving forward.

(Note: There is a version of this deal that works with just Boston and Portland directly. The Blazers would take Schroder and Richardson for Powell. The challenge there is Portland would need to find a separate deal to get out of the luxury tax. Not impossible, but why not kill two birds with one stone?)

Why would the Celtics do this deal? Boston would do this deal because they get better and cheaper. At least for the remainder of the 2021-22 season. The Celtics take on about $3 million in guaranteed salary for 2022-23, but that’s something to worry about next season.

Barnes is a good player. He’s the exact kind of 3/4 Boston has needed for a while now. His shooting and ability to slot in as somewhere between the Celtics third and fifth-best player is perfect. Like Powell, Barnes knows how to play a role next to stars.

Len is basically a throw-in to make the salaries work, but he’s also a decent backup option. The risk for the Celtics in trading Horford is that they’re not only trading their starting power forward, but also their backup center. This deal would be a bet that Robert Williams can stay healthy and play 30+ minutes per game in the playoffs. Len and, to a lesser degree, Enes Freedom would be the backups on nights when Grant Williams can’t play small-ball five.

Why would the Kings do this deal? Sacramento is lacking in upside options on the wing. They’ve got plenty of guards and bigs, but don’t have a young wing of note. Langford is stuck behind Jayson Tatum and Jaylen Brown, and in competition with Aaron Nesmith. He’s never going to get the kind of shot in Boston that he’d get in Sacramento. Is he a surefire prospect? No. But he’s better than nothing.

As for Horford, Sacramento isn’t going to or winning the 2022 NBA Finals. That means Horford will only have $14.5 million guaranteed for next season. Sacramento could move on with relative ease and could even stretch that money over three seasons. After this deal, the Kings would be in the $20-30 million range for cap space this summer. That’s enough to make some noise, either through signings or trades.

If something like this was close, Sacramento should ask for a second first-round pick from Boston. They might not get it, but it’s worth asking. The Celtics could see Barnes as enough of an upgrade to add in another pick.

If the Celtics can do these two deals, they’d be left with a rotation that looks something like:

Boston could also move on from Bol Bol or P.J. Dozier either through a subsequent salary-dumping trade or just by straight waiving them. That would allow them to add a veteran ballhandler on the buyout market. Maybe someone like Goran Dragic would see the upside of this team and want to play off the bench to close the year?

That roster looks pretty solid for the rest of this season. It’s at least as good what the Celtics are working with now. If Barnes and Powell fit in quickly, they could even push up the standings into the top-six and a guaranteed playoff spot.

Oh, and even after these moves, the Boston avoids the tax. Consider that goal accomplished too.

Beyond the rest of this year, the Celtics would have Barnes and Powell for at least 2022-23 as well. That’s a good spot to start from. If they want to go star-hunting via trade, Barnes and Powell offer roughly the same salary-matching ability as Horford and Richardson. They’d be out a first-round pick, but there isn’t a clear spot for a non-lottery player in the Celtics rotation anyway.

This set of deals checks three boxes for Boston. They avoid the tax for 2021-22. They pick up players who can help in this year’s playoff push. And they pick up players who can help beyond this season, as well. That’s three-for-three as far as meeting goals goes. And it’s without getting crazy assuming the Kings will do a “KANGZ!” type of move or fleecing some team for an underpaid All-Star talent. Just solid value sent out with solid value coming in.