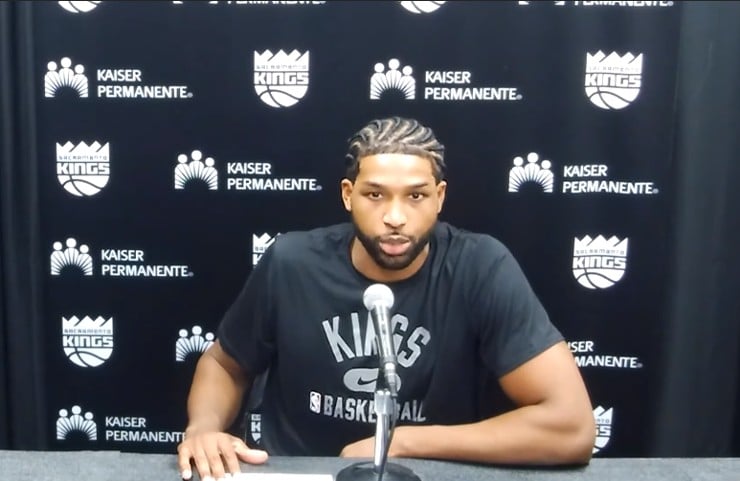 Sacramento Kings forward Tristan Thompson went on a rant to reporters after his team lost to the Timberwolves 107-97 on Wednesday. When asked about needing motivation from head coach Luke Walton and his coaching staff in the post-game press conference, Thompson replied, “I don’t need no f—ing coach to inspire me!”

“No man in this world should rely on another man to inspire them, point blank period. You can put that in all capitals.” The eleventh-year veteran ended his performance with 8.0 points and 9.0 rebounds in 17 minutes played. In the video below, his passionate response begins after the reporter’s question at 4:53.

“No one should ever need a coach to inspire you,” he added. “I’m not with that s—t. My teammates aren’t with it. This is not no frickin’ Glory Road s—t. No, you gotta be ready to play. Your number is called — you in the damn game — I don’t need no f—ing coach to inspire me.”

“Never that. Never have, never will. The day I need a coach to inspire me is the day I’m f—ing retiring. I’mma go play with my kids in the park.” Additionally, considering the Kings have lost seven of their last 10 games this season, which player or coach wouldn’t be frustrated right now?

Furthermore, the Kings rank 11th in the Western Conference. They currently trail the Lakers, Grizzlies and Thunder for a top-eight playoff spot. Fortunately, more than half the regular season has yet to be played. If Thompson is this frustrated, he could request a trade. But, the best players know how to handle losing. By now, he should certainly have the patience to deal with adversity.

Moreover, so far this season, the forward is averaging 4.9 points, 5.7 rebounds, and nearly 1.0 assist per game in 10 games played. The Toronto native was selected fourth overall by the Cleveland Cavaliers in the 2011 NBA Draft. He also played for the Boston Celtics in the 2020-21 season. On Aug. 7, he was traded from Boston to Sacramento. Tristan Thompson turns 31 years old in March 2022.