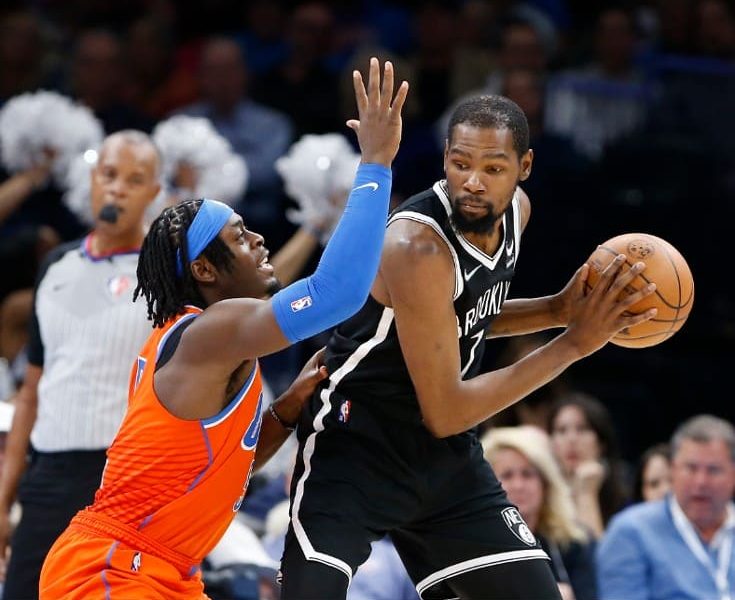 In tonight’s interconference rematch, the Oklahoma City Thunder (13-27) are facing off versus the Brooklyn Nets (26-14) at Barclays Center. Will Shai Gilgeous-Alexander and the Thunder end their five-game skid?

Comparing these teams’ betting statistics for Monday night’s mismatch, the Thunder are 26-14 against the spread in the 2021-22 NBA regular season, while the Nets are 15-24-1 against the spread. The tip-off time for this contest is 8:30 p.m. ET. Of course, this game can be watched live through Bally Sports Kansas City, Bally Sports Midwest, NBA League Pass and YES Network. According to Land of Basketball’s database, based on 94 head-to-head regular season games played all-time, Oklahoma City is 59-35 versus Brooklyn. However, in the previous three meetings, the Nets are 2-1 against them.

On Nov. 14, 2021, the first meeting this regular season, Brooklyn won 120-96 at Paycom Center. On another subject, Nets point guard Kyrie Irving was asked how he handled things away from the team. He said, “I didn’t wanna accept it at first. I tried not to get emotionally attached to it, because when I did it, felt like I had FOMO. Every single day was just, ‘Man I just wanna be with the guys.’” Not even NBA analysts with dependable, insider sources are sure on how many games Irving will play this season. Considering the guard will not be eligible to play at Barclays Center, this will be a problem come time to the postseason.

Kyrie Irving on what it was like when he was away from the team: “I didn’t wanna accept it at first…I tried not to get emotionally attached to it, because when I did it felt like I had FOMO. Every. Single. Day, was just like, ‘Man I just wanna be with the guys.’ ” #Nets #NBA

Moreover, in the Thunder’s 122-118 road loss versus the Wizards on Tuesday, guard Shai Gilgeous-Alexander led his team in scoring, putting up 32 points in 35 minutes on the court. Guard Josh Giddey ended his performance with 18 points, 6.0 rebounds and 8.0 assists in 36 minutes played as well. Oklahoma City kept this contest close, but Washington pulled away late in the fourth quarter.

After viewing the box-score game statistics, these teams were almost statistically even. Though, the difference-maker for the Wizards was their shooting accuracy. The Thunder shot 47-for-98 (48%) from the floor and 11-for-39 (28.2%) from three-point range. Following this loss, the team is now 5-14 away, 8-13 at home and 12-7 ATS on the road this season.

Per ESPN’s Basketball Power Index, the Nets have a 65.3% probability of winning.

On the other side, on Wednesday, in the Nets’ 138-112 much-needed road win over the Bulls, forward Kevin Durant scored a team-high 27 points in 30 minutes of action. Guard James Harden closed out his performance with one more career double-double. He finished with 25 points, 7.0 rebounds and 16 assists in 33 minutes played. In the third quarter alone, Brooklyn outscored them 39 to 19.

Taking the time to skim through important betting trends is always preferred. The Thunder are 5-1 ATS in their last six performances. Plus, they are 0-5 straight up in their previous five games this season. Next, Oklahoma City is 9-2 SU in the team’s past 11 matches versus Brooklyn at Barclays Center. And, the total has gone under in five of their last seven contests.

As for the Nets, they are 1-7 ATS in their previous eight performances. Not to mention, the total has gone over in five of their past seven contests versus the Thunder. Next, Brooklyn is 0-6 ATS in the team’s last six games played at Barclays Center. Also, the total has gone over in four of the Nets’ previous six matches against Western Conference opponents. Therefore, think about taking the Nets to win and cover the spread. If you are new to sports betting, read our handicap betting guide.

Pick the Nets to win, they will cover the spread and the total will go over 217. Brooklyn is a seven-point favorite at home with BetOnline.