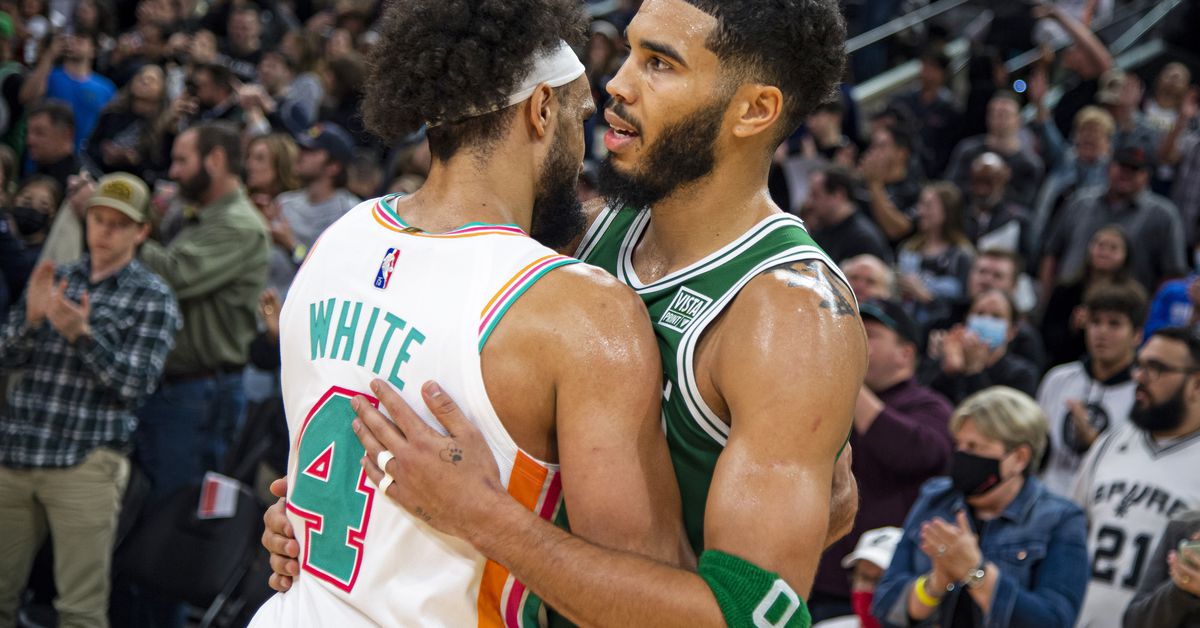 Back when newspapers were more important institutions, they had general sports columnists who’d write scathing one-sided columns, devoid of any acknowledgement to the opposing argument. In that spirit, while I’m not a fan of the Derrick White trade, my actual opinions are more nuanced. I understand that it’s absurd to judge a trade less than 24 hours after it’s made. Regardless, I enjoyed writing this hit piece from the perspective of a blowhard writer (which, at times, I can be).

Just a few hours before the NBA trade deadline, the Spurs traded Derrick White to the Celtics for Josh Richardson, Romeo Langford, a 2022 first-round pick, and a 2028 first-round pick swap. This was a senseless and shortsighted trade from Brad Stevens, a man who was once considered a basketball genius.

The Twitter reaction from the toxically optimistic Celtic fans was predictable. There was a lot of “nobody’s gonna score on a Derrick White / Marcus Smart backcourt,” and “I was glad to see Romeo gone,” and “Josh Richardson wasn’t that good anyway.”

Here are the facts. Josh Richardson is a better shooter than Derrick White, and aside from Jayson Tatum and Jaylen Brown, he was the best shooter on this team. Richardson is 6’5” with a 7-foot wingspan, White is 6’4” with a 6’8” wingspan. White was never asked to defend wings in San Antonio. Richardson did that regularly, and now there’s no wing depth with Langford gone, too. Richardson makes $11.6 million this year and $12.3 million next year, while White is on the first year of a four-year, $73 million contract.

When I saw the first tweet from Shams Charania, I assumed it was Richardson for White straight up, and even then, I wasn’t happy. They’re roughly the same level of defender, Richardson is a better shooter, and White is a better ballhandler. Additionally, Richardson is on an outstanding contract while White is overpaid.

Later, we learned Boston included Romeo Langford and their 2022 first round pick in the deal. I couldn’t believe it. Romeo was turning into a plus defender who effectively played his role on offense. He shot 36 percent from three when he played over 18 minutes. He became a steady rotation player after injury-plagued rookie and sophomore seasons.

For whatever reason, the Celtics no longer care about their first round picks. As recently as January 14th, the Celtics were 11th in the Eastern Conference standings. As of today, they’re positioned for the 18th pick, but it’s certainly possible they fall within the 10 to 14 range. They really couldn’t get it lottery protected, or even top-10 protected?

Then the nail in the coffin — the Celtics inexplicably included a 2028 pick swap, lightly protected for the first pick. I couldn’t believe it. Yes, 2028 is six years away, but moving a future asset like that is irresponsible from a team building standpoint.

Josh Richardson was a valuable player for this Celtic team. He defended well, shot 40 percent from three, was a good locker room presence, and was on a great contract. If you think White is a significantly upgrade, congratulations, you’ve successfully been brainwashed by Celtics Twitter propaganda.

I can say this without hesitation: Derrick White is the most unspectacular player in the NBA. He’s not fast, can’t jump, doesn’t have the handle or passing to be considered a pure point guard, and lacks the bucket-getting instincts of a modern scoring guard. He’s shooting 31 percent from three on 5.3 attempts. Richardson, and even Langford, were more reliable outside shooters. The Celtics currently rank 22nd in three-point percentage and unfathomably traded their best catch-and-shoot player.

Admittedly, Derrick White plays hard on both ends of the floor. Coaches love him because he extracts the most out of his physical ability and always makes the right play. He’s got some quickness, he gets to the rim, and he’s a solid off-ball cutter. However – and I cannot emphasize this enough – there’s no dynamic quality to his game.

The Spurs had no issue trading him during the first year of his four-year $73 million contract. Why would they draft Josh Primo – a guard projected as a late first-rounder to early second rounder – with the 12th pick if they already had Derrick White? Gregg Popovich didn’t care about cutting bait to make way for Primo and Lonnie Walker.

I don’t want to hear that this year’s pick doesn’t matter. It’s negligent trading away your first-round pick in back-to-back years. Teams need to have young talent coming up the pipeline. They can’t solely rely on free agent signings. Especially this team that’s barely above mediocre.

People are saying “2028 is so far away, who cares about a pick swap.” Trading an unprotected pick several years into the future is inherently dangerous. The Kings got killed for trading their 2017 pick swap to Philly in 2015. In 1997, the Grizzlies traded their 2003 top-one protected pick swap, and it turned into the 2nd pick of the draft (which was Darko Milicic, but could have been Carmelo Anthony, Chris Bosh, or Dwyane Wade). The Nets didn’t care about throwing in a 2017 pick swap to the Pierce/Garnett trade, and it turned into Jayson Tatum.

I keep seeing tweets about how this defense will be elite. It already was elite! The Celtics have the 3rd best defensive rating and the best over the last month-and-a-half. If there’s one thing they didn’t need, it’s more defense. Why trade your best spot-up shooter for a slightly better (but less versatile) defender?

This will rank among the worst trades in Celtic history. It will be remembered in the same category as Chauncey Billups for Kenny Anderson in 1998, the 8th pick in 1999 (Andre Miller) for Vitaly Potapenko, three first-round picks for Bob McAdoo in 1979, and Joe Johnson for Tony Delk and Rodney Rogers in 2002. Apparently, Brad Stevens has been possessed by the ghost of Rick Pitino.

Yesterday, the Suns acquired Aaron Holiday from the Wizards for cash. Where were the Celtics? If they needed a point guard to replace Schroder, they could have targeted Tomas Satoransky or Ish Smith. They could have acquired Montrezl Harrell, Serge Ibaka, or Donte DiVincenzo as relatively low-cost options that would immediately improve the roster.

Brad Stevens was opposed to giving Evan Fournier a four-year, $78 million contract last summer, but he has no problem trading a high-level bench player, a young rotation player, a first round pick, and a future swap for a worse offensive player on a four-year, $73 million deal? The Knicks are certainly regretting that Fournier contract, but he’s shooting 40 percent from three on seven attempts. The Celtics could use that.

Don’t get me wrong. Derrick White is a solid two-way player who’ll play big minutes on this team. He’s a good defender, but certainly not the disruptive force some of you on Twitter think he is. He’ll never be a top-15 point guard. He’ll never be as impactful a player as Marcus Smart, and we’ll be lucky if he ever has a season shooting 40 percent from three.

Here’s how everything will play out from yesterday’s mistep.

The Celtics will come back to earth after their recent stretch of success. They’ll continue to blow fourth quarter leads as everyone will recognize that beating Orlando, Detroit, and New Orleans shouldn’t be celebrated. Jayson and Jaylen will have no space attack the hoop. Get ready for a gluttony of contested 18-foot jumpers. More importantly, get ready for the play-in tournament.

Brad Stevens won’t be the GM for long. Either next season or the year after, Rick Carlisle will get fired from Indiana. Wyc Grousbeck will allow Brad to interview for the job, which he’ll eventually accept.

Jaylen Brown will leave Boston when he hits free agency in 2024. The Celtics won’t trade Tatum, thinking the supermax will entice him to stay, but he too will leave Boston during his 2025 free agency. The Celtics will be a bad team for the years to come, and in 2028, we’ll have to relinquish our top-5 pick to the Spurs. It won’t fall in the top-1 protected range because we’ll be punished by the basketball gods. It’s Tim Duncan all over again.

This was a disaster.