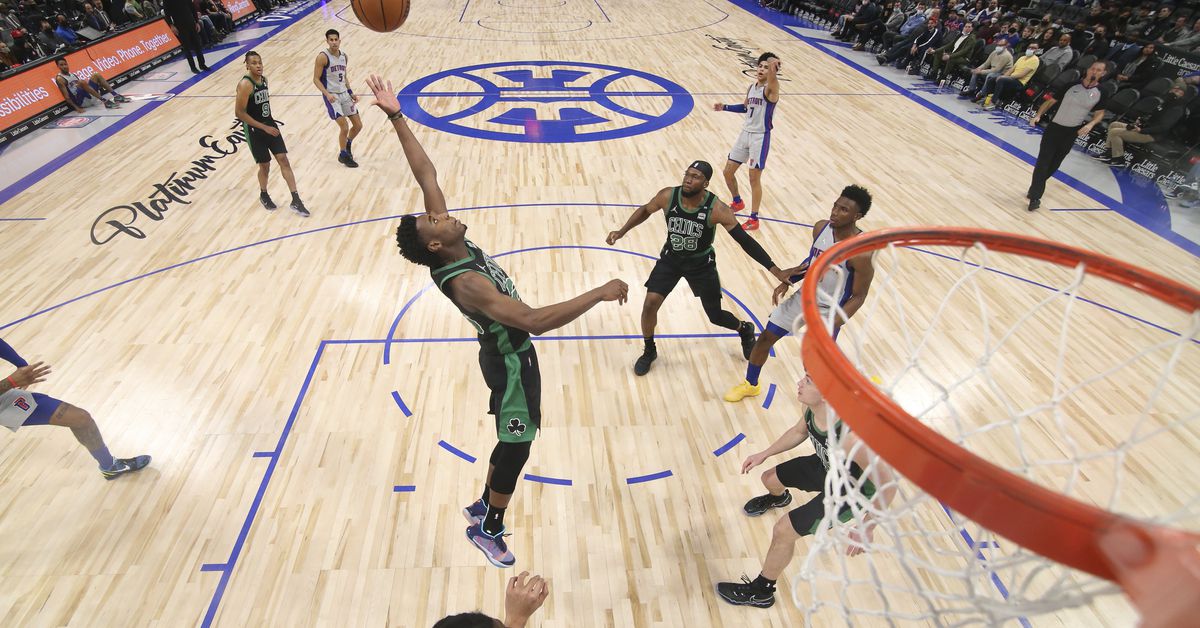 Four minutes remain on the clock and the Boston Celtics hold a sizable lead over the Detroit Pistons. Then Ime Udoka rings the changes, bringing in Boston’s youthful contingent of players for some valuable playing time. For a portion of the fanbase, those minutes were an opportunity for Payton Pritchard and Aaron Nesmith to prove they deserve more consideration within the rotation and are capable of stepping up if a spot becomes available after the trade deadline.

Instead, for the second time this season, the kids almost gave the game away. Luckily, unlike the November 20 game against the Oklahoma City Thunder, Udoka didn’t have to recall his starters to see the contest through. But, those four minutes didn’t fill anybody with confidence and seriously hindered the young guy’s cases for additional playing time heading into the business part of the season.

With a lineup of Pritchard, Nesmith, Langford, Grant Williams, Bruno Fernando, and substitute Enes Freedom, the Celtics garbage time players went 1-of-6 from the field, turned the ball over twice, and allowed the Pistons to go on a 17-6 run to close out the game.

Earlier in the season, it made sense that so many people, myself included, were calling for Udoka to provide the team’s younger players with developmental opportunities. The Celtics were inconsistent and uninspiring, and the best way to combat the inevitable emotional spiral is to place your faith in player development. However, since the turn of the year, the Celtics have been performing at a high level, ranking first in defensive rating, 12th in offensive rating, and second in net rating.

As such, we can’t expect Udoka to move away from a winning formula to develop some of the team’s younger prospects. Suddenly, the Celtics look like a team capable of surging up the Eastern Conference standings, so why throw a spanner in the works now? But maybe there’s room for one of Boston’s young trio to fight their way into consistent consideration.

Against the Pistons, Romeo Langford got 18 minutes of playing time, and before that final four-minute stretch, looked good value for money, especially when driving out of the corner. The third-year wing was smart with his relocations, played good defense, and was judicial with his shot attempts; everything you want out of a young bench player looking to earn their stripes.

The issue isn’t playing one or two of the kids alongside the team’s veteran players, we know that can work. But, it’s becoming increasingly apparent that when the entire kindergarten unit is on the floor, bad things happen.

Ok, an airball from the free-throw line isn’t proof of how poorly the closing line-up played, but it’s certainly symbolic. Unfortunately for Langford, when people think back to this game, it’s that shot they will remember, forget about everything that came before it.

Of course, Langford is arguably the only one of Boston’s young trio to give a reasonable account of themselves this season, albeit due to extended opportunity. Still, neither Nesmith nor Pritchard has shown enough during their limited minutes to prove they deserve further consideration.

True shooting, for those that are wondering, is a statistic that amalgamates field-goal, three-point, and free-throw shooting to create a clearer picture of how a player is shooting overall, the formula for this metric is 2X(FGA+(0.44 X FTA)).

What we can see when looking at the younger guys’ current shooting form, is that they’re not in rhythm, and as such, won’t add much to an offense that’s currently hit its stride. Perhaps that’s why pairing so many of these prospects together, even for a short stretch, is so problematic. Because regardless of how big your lead is if the players on the floor can’t make shots, then the other team becomes inspired to cut the deficit.

When you’re on the end of the bench, wondering when your next opportunity to impress is going to come from, it’s hard to remain locked-in and motivated. Still, you can’t keep laying goose eggs and then wonder why you’re not part of the team’s plans as the season progresses.

Furthermore, Udoka’s current formula for success is a shortened eight-man rotation, meaning there are seven other players fighting for relevancy, and every possession wasted is another hurdle you need to clear when your next opportunity rolls around.

And this is where “Play the kids!” may have died for the Celtics.

It’s crazy to think that a four-minute stretch of basketball could be so damaging to one’s chances of cracking the rotation, but those four minutes were a culmination of months worth of struggles and disappointing production. We might all want Udoka to play the kids, but it’s becoming clear those players haven’t progressed since the summer – and debating who’s at fault for that, is an article onto itself.

For now, though, we shouldn’t be surprised if two of the three prospects continue to ride the pine, while Udoka determines which of the younger guys he feels can develop within the rotation and become a consistent contributor to the team moving forwards. Because, whether we like it or loathe it, there isn’t enough room for all three, and if we’re being honest, as long as the Celtics keep winning their games, that’s totally acceptable.