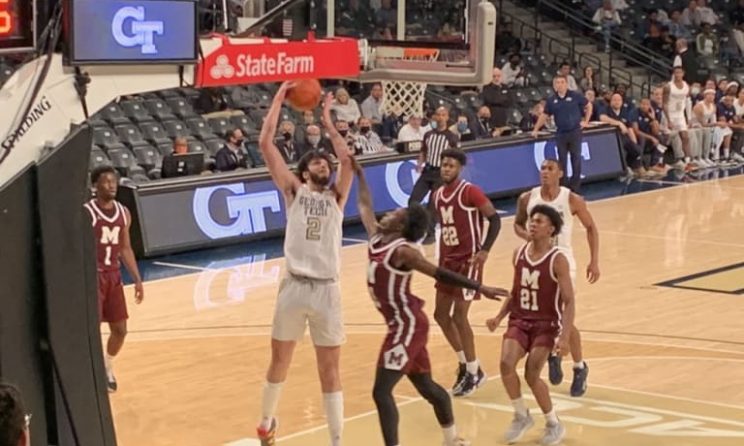 ATLANTA- Georgia Tech jumped out early on Morehouse and never looked back with an 89-52 win over the Tigers in the lone exhibition game of the 2021-22 season. Veterans Mike Devoe and Jordan Usher led the way for the Jackets. Devoe had 23 points, three rebounds, two assists and two steals in 21 minutes of work while Usher added 16 points, three steals and six rebounds in 18 minutes of work.

Head coach Josh Pastner had his own concerns going into the game. He coached the entire game with his cell phone in his pocket awaiting the birth of his next child. He said he asked his wife to only call him during the game if she was going into labor.

“I had my phone during the game the entire time because I told my wife if she called me that means I had to leave the game and I go pick her up because she’s almost 39 weeks pregnant so she’s due any day now,” Pastner said. “I kept checking my phone, but no call. I said do not call me during the game unless you’re going unless you are about to go into labor otherwise you can’t call me. If I see it then I’m picking it up if you see your number calling but she never called so we’re all good.”

Tech held Morehouse to 28-percent shooting and forced 24 turnovers in the game. The Jackets outrebounded the Tigers 41 to 36 and Tech had assists on 22 of 31 made field goals.

Newcomers Deebo Coleman and Deivon Smith each added 10 points off the bench for the Jackets. Smith had eight assists just one turnover and three steals. Kyle Sturdivant who started the game fouled out with just one point in 19 minutes, but played well defensively. Pastner said he needs Smith and Sturdivant to carry the load defensively.

“Deivon had eight assists, one turnover and three steals,” Pastner said. “I’m hard on him and Kyle Sturdivant because we need those guys because you’re losing Alvarado who was the Defensive Player of the Year and set the tone for us defensively. Those two have got to set the tone for us defensively, especially guard rebounding, and I told Kyle he’s got to get got to stick his nose in there and get defensive boards.”

The Jackets played without Bubba Parham who is out with a knee injury and Tristan Maxwell who had a dental problem that flared up on Friday. Pastner said they went with a 10-man rotation on Sunday to learn more about the team, but he is not sure if that will be a longer-term plan.

“I’d usually played six or seven guys and maybe have stretched a little bit to eight here and there but I think for this year we’re gonna have to get into an eight or nine man rotation and figure that out which will give us more opportunity for more depth,” Pastner said. “I like our speed and obviously not having Alvarado and Moses there is an adjustment period. We kind of have to figure that out for our team.”

The big area of concern entering the season for the Jackets is the big man spot replacing ACC Player of the Year Moses Wright. Rodney Howard, Saba Gigiberia and Jordan Meka split time in the post. Gigiberia had eight points, six rebounds and two blocks off the bench in 14 minutes. Meka had two points and five rebounds in nine minutes. Howard was the lone scholarship player who did not score in the game, but he had three rebounds, three steals, and a block in 17 minutes.

Pastner said they played just base man-to-man defense and did not play his usual zone defense on Sunday as they adjust to the new lineup and new faces, especially in the post.

“I mean, we’re behind in some areas and we got to clean some of that stuff up. We just got to be better in picking things up quickly until we can add some more stuff because what makes us unique is the things that we do offensively and defensively that you know how we’re different we are but to be able to do that it’s a complex system. So we just got to continue to get them sped up. It might not be all in until we get towards ACC play and be a little more simple to start the year and just kind of hopefully just win through playing hard and playing the right way.”

Georgia Tech took an early 13-3 lead before platoon swapping in the three true freshmen along with Deivon Smith and Saba Gigiberia.

“‘It is hard to play that many guys but the only way to do it is platoon it and that’s what I did,” Pastner said of his rotation early in the game. I put in five and pulled five and but I don’t know if that’s what is best for us to do moving forward. So I don’t foresee me doing that move forward. But there could be a time if we’re playing more full-court pressure and some guys are worn out you need to get a new five and we’re capable of doing that because we have more depth this year and I’ll have to do a better job of playing a little more guys. When the balls tipped I want to win the game so I’m gonna just have to extend our rotation a little longer and maybe there are some opportunities to do that.”

The Jackets cruised to a 45-25 halftime lead over the Tigers. Devoe led all scorers at the half with 13 points at the half. Jordan Usher added 9 points. Newcomer Deivon Smith has 3 assists and 4 points at the half while freshman Deebo Coleman had six points, Miles Kelly had 4 points and Jalon Moore had 2 points at the break. Tech shot 60% from the field in the first half and hit 5-of-10 from three. Morehouse shot just 34.6-percent in the first half with the majority of their offense coming from guard Tavares Oliver Jr. who had 12 points, but he was 0-4 from three.

The game was a tribute to former Morehouse coach Grady Brewer who passed away in May. The Tigers did not play in 2020-21 so this was their first game since the end of the 2019-20 season.

“It is unfortunate that coach Brewer passed away and he was a great coach and human being,” Pastner said. “So this game was really a way for us to honor coach Brewer.”

The real action starts up on November 9th with Miami (Ohio) at 7:30 pm in McCamish Pavilion. The Jackets will play nine straight games in Georgia including a trip to Athens to play Georgia and a game in State Farm Arena against LSU before they leave the state to play USC in Phoenix in mid-December.