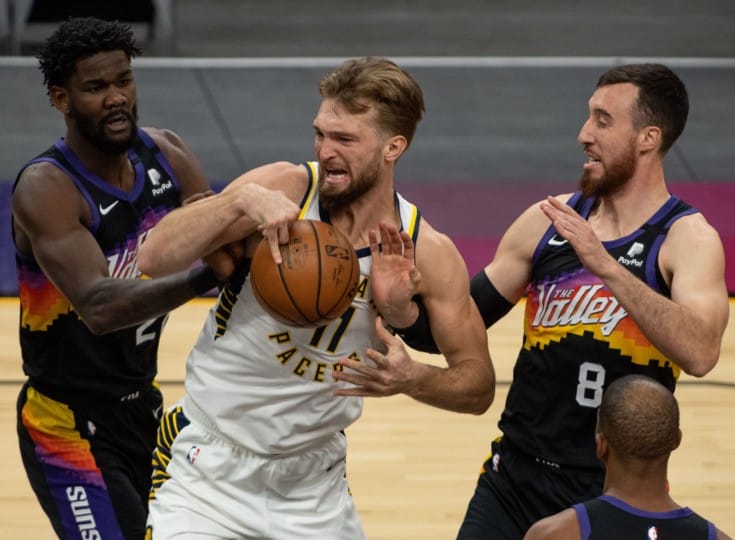 On Friday, Jan. 14, 2022, the Phoenix Suns (31-9) are playing the Indiana Pacers (15-27) at Gainbridge Fieldhouse. Will Caris LeVert and the Pacers drop their third consecutive game this season? This is the first meeting between Phoenix and Indiana this regular season.

Additionally, in the previous three meetings, the Suns are 2-1 against them. On Mar. 13, 2021, the last time these teams faced off during the regular season, Indiana won 122-111 at Footprint Center. Pertaining to fan voting for the 2022 NBA All-Star Game, Chris Paul is now trailing Russell Westbrook for Western Conference guards. Westbrook has a total of 576,512 votes, ranking in sixth place overall. Paul currently has 561,896 votes. For those unaware, voting for the All-Star Game ends on Saturday, Jan. 22. Any fan can use the NBA App or go to NBA.com/vote to submit one full ballot.

So #ChrisPaul is now behind Russell Westbrook in the #NBAAllStar voting? Yeah, that’s, to put it lightly … 🐂&%t.

We talk that and trades on this audio only edition.

No Chris Paul on the Suns’ injury report for tomorrow against the Pacers.

Cam Johnson is questionable for that left ankle sprain that kept him out of Tuesday’s win in Toronto.

Ish Wainright is now out of the health and safety protocols. He’s questionable for conditioning.

Moreover, on Tuesday, in the Suns’ 99-95 road loss versus the Raptors, forward Jae Crowder scored a team-high 19 points in 35 minutes on the court. Deandre Ayton and Devin Booker each amassed 16 points, too. Although Toronto outscored Phoenix 31 to 23 in the opening quarter, the Suns finished strong. They shot 11-for-32 (34.4%) from behind the arc.

Toronto did have opportunities to overtake Phoenix, though. The Suns had a total of 20 turnovers in this game. Not to mention, the Raptors outscored them 48 to 34 in the free throw lane. Including this win, the team is now 14-4 away, 17-5 at home and 10-8 ATS on the road this season. They have won six of their past 10 contests as well. Phoenix is also ranked number one in the Western Conference.

Per ESPN’s Basketball Power Index, the Suns have a 56.8% chance of winning.

Meanwhile, in the Pacers’ 119-100 home loss against the Celtics on Wednesday, forward Myles Turner led his team in scoring, putting up 18 points in 24 minutes of action. Center Domantas Sabonis accumulated 17 points, 6.0 rebounds and 6.0 assists in 32 minutes played. Indiana allowed a grand total of 64 second-half points.

In the third quarter, the C’s outscored them 33 to 22. The Pacers’ lousy three-point shooting contributed quite a bit to their 19-point loss. They shot 7-for-36 (19.4%) from three-point range. Factoring in this defeat, the team is now 12-11 at home, 3-16 away and 13-9-1 ATS at home this season. Unfortunately for loyal fans, Indiana ranks 13th in the Eastern Conference.

For must-read betting trends, the Suns are 4-1 straight up in their last five performances. Plus, they are 2-7 ATS in their previous nine contests versus the Pacers this season. Next, Phoenix is 5-1 SU in the team’s past six games on the road, and the total has gone over in four of the Suns’ last five contests when playing the Pacers at Gainbridge Fieldhouse. Lastly, the team is 0-5 ATS in their past five matches against Central Division opponents.

As for the Pacers, they are 5-2 ATS in their previous seven performances. And, the total has gone over in four of their last six games played. Next, Indiana is 1-8 SU in the team’s past nine contests. Also, the Pacers are 5-0 ATS in their previous five matchups versus Western Conference opponents. Taking everything under some consideration, the Suns could likely win and cover the spread. If you want to learn more about NBA betting, read our handicap betting guide.

Pick the Suns to win, they will cover the spread and the total will go over 220. Phoenix is a 5.5-point favorite on the road with BetOnline.