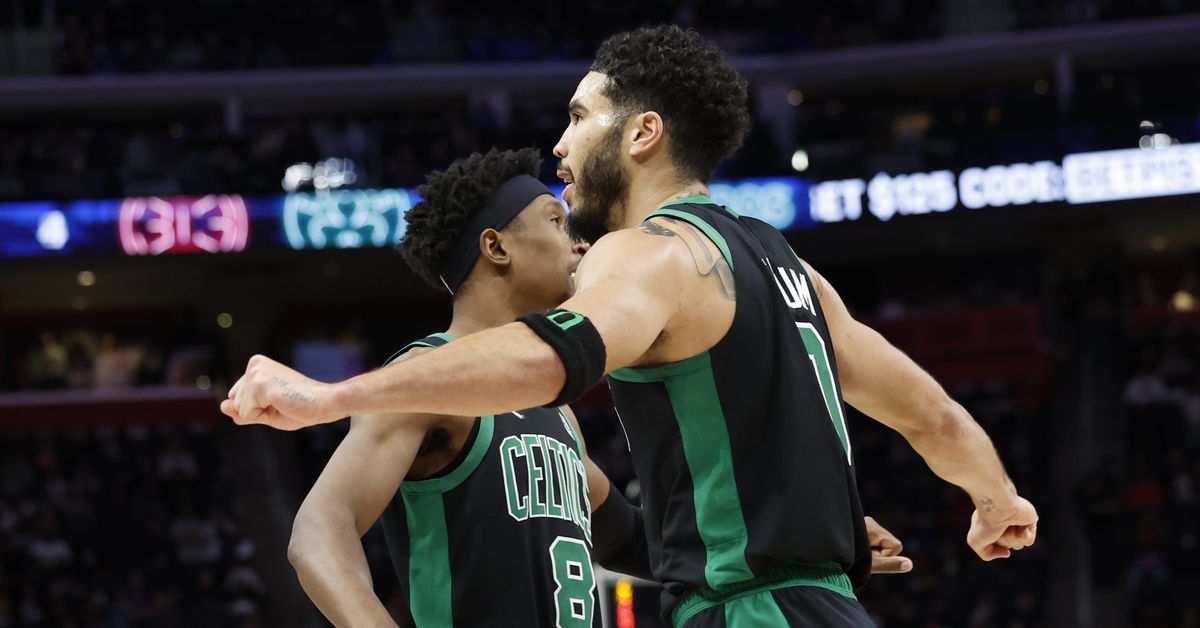 1. The Boston Celtics got their offense going against the Detroit Pistons through a familiar player, but in an unfamiliar way. Jaylen Brown was the primary option to open the game, but the Celtics did most of their work playing through Brown in the post early on.

Brown opened the scoring with a jump-hook through contact:

Later in the quarter, Brown dropped in a fallaway over the smaller defender:

Then, with his rhythm going, Brown works behind a Robert Williams screen for the pullup triple (Trust us that it went in. No idea why the clip cuts where it does.):

After the first period, Brown kind of went on cruise control, but it was fine. Others picked up the scoring load after his big start.

2. Al Horford’s night was cut somewhat short due to a sore right foot. Ime Udoka said postgame that Horford could have come back in, but with a big lead, the team chose to hold him out.

When Horford did play, he turned back the clock a little. This was a old-school Horford face-up play into a backdown and drop-step for the bucket:

To end the first quarter, Horford found the Fountain of Youth and got up for this loud follow slam:

3. The Celtics defense is playing at an elite level. Boston is up to fourth in the NBA in Defensive Rating but has vacillated between first and second since the calendar flipped to 2022. Part of that is personnel and the health of that personnel, but Ime Udoka has made an important, yet subtle, tweak too.

On most actions when Robert Williams and Al Horford share the floor with Jayson Tatum, Jaylen Brown and Marcus Smart, Udoka has Horford guard the opposing center. Williams doesn’t automatically pick up the 4 though. Williams is being put on the weakest shooter of the opposing lineup. Then Tatum, Brown and Smart are switching everything between the other three players.

For example, Williams started this game guarding Hamidou Diallo, while Horford checked Isaiah Stewart and Tatum, Brown and Smart were switching off between Saddiq Bey, Jerami Grant and Cory Joseph.

This strategy allows Williams to roam and help, without hurting the defense by leaving a shooter open. In 15 games in 2022, Williams has averaged 2.7 blocks per game. That’s up there with the best rim protection in the league.

4. Williams isn’t just blocking shots. He’s also shooting a ridiculous 73.8% from the floor. A big part of Williams’ success comes from his vertical spacing. The Celtics get a ton of easy offense from “Lob to Rob” plays.

This is excellent patience from Marcus Smart. He holds the ball for an extra dribble to draw the defense. Then he holds the pass for even a split second longer to allow Williams to get to the rim:

Jayson Tatum has learned if he comes off a screen from Williams and the defender is trailing Williams, to just put the ball up near the basket:

And once again, we see Smart and Williams’ chemistry at work. Williams knows if he runs and cuts hard, the ball will be there. And Smart knows Williams will go up and get it:

5. After a very quiet first half, Jayson Tatum took over in the third quarter. He scored 19 of his 24 points after the break, despite not playing a second in the fourth quarter.

Tatum has been on the attack in recent weeks. There’s no settling here as he explodes to the rim:

It feels like it’s been a minute since we’ve seen the side-step triple from Tatum:

If you run the floor hard, good things happen. Dennis Schroder does a good job pushing the ball up. Out of nowhere, Tatum sprints into the scene and the result is another loud finish:

6. It was another good ball and player movement game for the Celtics. They had 23 assists on 37 baskets. One of the best examples of good ball movement didn’t result in a bucket, but it was a great instance of “process over results”. Jaylen Brown does a good job of reading the double-team. He kicks it to Jayson Tatum for what is normally a shot. But Tatum turns that good look into a great one with a swing to Marcus Smart:

And then because Detroit’s defense is scrambled, the Celtics get another clean look off the offensive rebound. Two misses, but really good stuff offensively.

7. Ime Udoka has basically cut the rotation to eight players. Only Josh Richardson, Dennis Schroder and Grant Williams are playing significant minutes off the bench. Occasionally, Romeo Langford or Aaron Nesmith is making a cameo appearance. Yet, Udoka has done it by not pushing the starters minutes to crazy levels.

Only Jayson Tatum (36.2), Jaylen Brown (34.5) and Marcus Smart (33.3) are averaging more than 30 minutes per game. And those numbers are in line for two star players and a starting point guard. Being able to run a short rotation, without overly taxing those regulars, is a good sign that the playoff depth might not be quite as worrisome as it once looked.

8. Marcus Smart is in such a groove right now. The box score shows a ho-hum six points, four rebounds and six assists, but Smart only played 25 minutes and the Celtics didn’t need him to do much. When they did, he delivered.

Switch your big onto Smart at your own risk. He’s getting good shots against bigs on a regular basis. Also, notice the little shoulder to create some space:

Smart is also a master of making chicken salad out of chicken…excrement. This could have been a turnover, but Smart makes the play, and it ends up in a Grant Williams triple from his money spot:

Ime Udoka emptied the bench with the Celtics leading 96-74 with 4:04 to play. The Pistons proceeded to outscore Boston by a 19-6 margin to make the game a lot closer than it should have been. That included Udoka having to use a timeout and having to put Grant Williams and Josh Richardson back into the game.

It’s nitpicky in what was a good win, but Romeo Langford, Aaron Nesmith and Payton Pritchard haven’t done a consistently good job of making the most of their limited opportunities. That’s why Udoka has cut the rotation to just the eight players he trusts. And it’s not all about playing veterans. Robert Williams and Grant Williams have won spots through hard work and producing when their numbers are called.

If the trio of Langford, Nesmith and Pritchard want more than mop-up duty, they need to do the same.

10. Robert Williams was asked what the Celtics have done differently since they starting winning games in January. His response was telling, as Williams said “…sick of losing, I guess. Sick of that disgusting taste in your mouth.”

Williams also added that players aren’t taking criticism from each other or the coaching staff personally. They’re talking and holding each other accountable.

It’s working, as Boston has won four straight games. They’re up to eighth place in the Eastern Conference now. And the Celtics are just 3.5 games behind the third and fourth-seeded Cleveland Cavaliers and Milwaukee Bucks.

Now, it’s on to warmer climates for another winnable game at the Orlando Magic. Then some big games loom in the coming weeks, as well as plenty where Boston will be favored too.

It’s been a long season. Allow yourself to dream a little before next week’s trade deadline. The Celtics have earned that by playing good basketball for well over a month now.