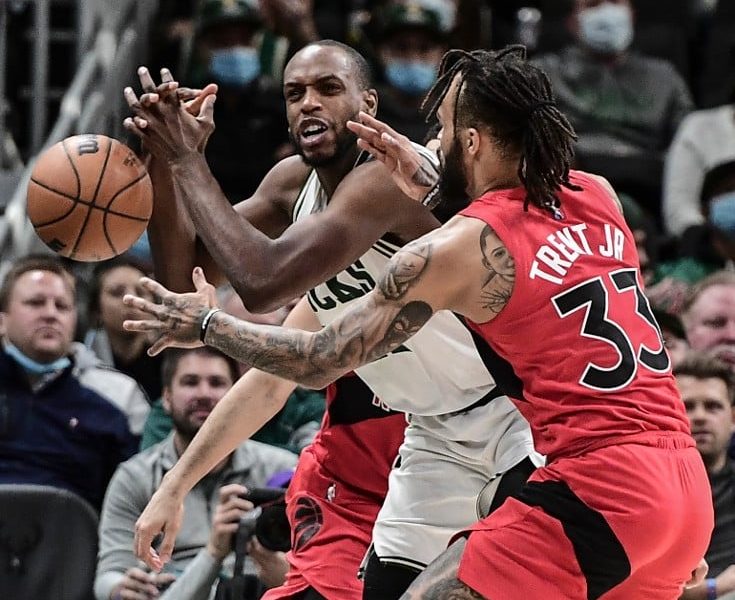 In Saturday night’s Eastern Conference rematch, the Toronto Raptors (20-19) are playing the Milwaukee Bucks (27-17) at Fiserv Forum. Can Giannis Antetokounmpo and the Bucks win their first game versus the Raptors since Jan. 27, 2021?

Leading into tonight’s intraconference matchup, the Raptors are 21-18 against the spread in the 2021-22 NBA regular season, whereas the Bucks are 20-24 against the spread. The tip-off time for the game is 6:30 p.m. ET. This contest can be watched live through Bally Sports North, Bally Sports Wisconsin and NBA League Pass. Per Land of Basketball’s database, these two competing teams have played one another 97 times during the regular season all-time. Overall, Milwaukee is 54-43 versus Toronto. Nonetheless, in the previous three matchups, the Raptors are a perfect 4-0 against them.

On Jan. 5, 2022, the second meeting during this regular season, the Raptors won 117-111 at Fiserv Forum. On another topic, in Toronto’s 103-87 road loss versus the Pistons, Raptors center Khem Birch broke his nose. He underwent surgery on Friday. As shown below, the center is out for tonight’s contest. In a total of 23 games played this season, Birch averaged 5.8 points, 5.2 rebounds and 1.2 assists per game. The Montreal native signed a multi-year deal with the Raptors on Aug. 6, 2021.

Khem Birch broke his nose, per Nick Nurse. He’s heading back to Toronto.

Bucks point guard Jrue Holiday is listed as out (left ankle soreness) for Saturday night’s game against the Raptors on the first injury report.

Additionally, on Friday, in the Raptors’ 103-87 road defeat against the Pistons, guard Fred VanVleet added one more double-double to his career total, finishing with 24 points, 5.0 rebounds and 10 assists in 42 minutes spent on the court. Forward Pascal Siakim ended his performance with another double-double as well. He amassed 23 points, 11 rebounds and 4.0 assists in 41 minutes played. In the second quarter, Detroit outscored them 25 to 16.

On top of allowing the Pistons to shoot about 47% from the field, Toronto surrendered 52 points in the free throw lane. Counting this defeat, the team is now 8-8 away, 12-11 at home and 9-7 ATS on the road this season. The Raptors have won six of their past 10 games, but they are on a two-game skid. Toronto ranks ninth in the Eastern Conference, trailing the Wizards for the eighth spot by half a game.

According to ESPN’s Basketball Power Index, the Bucks have a 71.2% chance of winning.

As for the Bucks, in their 118-99 home win over the Warriors on Thursday, forward Giannis Antetokounmpo closed out his impressive performance with a triple-double, accumulating 30 points, 12 rebounds and 11 assists in 30 minutes of action. Forward Khris Middleton contributed 23 points, 5.0 rebounds and 7.0 assists in 30 minutes played, too. In the first half, Milwaukee generated 77 points. The team outscored Golden State 40 to 28 in the paint.

For noteworthy betting trends, the Raptors are 11-3 ATS in their previous 14 performances. Plus, they are 6-2 straight up in their past eight contests. Next, Toronto is 5-1 ATS in the team’s last six games versus Milwaukee. And, the team is 5-1 SU in their previous six matchups against the Bucks. To add to these statistics, the Raptors are 7-2 ATS in their past nine contests. Lastly, the total has gone over in five of their last six games versus Eastern Conference opponents.

Meanwhile, the Bucks are 2-4 ATS in their past six performances. Also, the total has gone under in five of their previous six games played. Next, Milwaukee is 8-4 SU in the team’s last 12 contests at Fiserv Forum, and the total has gone under in eight of their past 10 games versus Toronto. In summary, think about picking the Bucks to win, but the Raptors could cover the spread. If you are new to sports betting, check out our handicap betting guide.

Pick the Bucks to win, the Raptors will cover the spread and the total will go over 223. Milwaukee is a 7.5-point favorite at home with BetOnline.