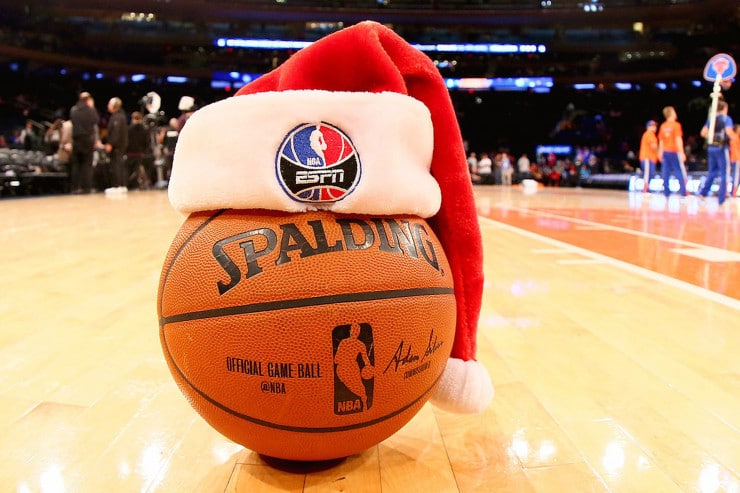 Christmas is the one day that many people look forward to each year. There are holiday traditions, spending time with family, presents from Santa, and so much more. Just as children enjoy all of the magic that Christmas morning brings, basketball fans rejoice with a wonderful slate of NBA games to fill the rest of the day.

One highlight each year is when the schedules are released and the matchups on Christmas Day are revealed. These often feature the top teams in the league, with plenty of star power featuring the likes of LeBron James, Kevin Durant, Steph Curry, etc. There will still be plenty of that on Saturday but many All-Star players will not be suiting up on Christmas.

A mixture of injuries and players in Health and Safety Protocols will put a damper on some of these matchups, but the games should still be interesting to watch. As teams jockey for position in the conference standings, organizations are also keeping tabs on what players they would like to target as the February 10 trade deadline looms.

Basketball Insiders has ranked the five games on the schedule and predicts a Christmas Day winner for each.

This first-round playoff rematch from last season doesn’t exactly pack the same punch, but it will still be fun to have a Christmas game at Madison Square Garden. There was great anticipation to see Trae Young back in New York after his comments last year but that won’t be happening. Young entered the Health and Safety protocols on Sunday and will likely miss this matchup between two underwhelming teams. Atlanta will also be without Danilo Gallinari and Clint Capela on Saturday.

Atlanta Hawks center Clint Capela has entered the league’s Covid protocols too, sources tell ESPN. The Hawks are potentially without him, Trae Young and Gallinari on Christmas Day vs. the Knicks. https://t.co/QnBUabtFs4

The Knicks and Hawks have both regressed this season, and are on the outside looking in when it comes to the playoff picture. Atlanta has dealt with a ton of injuries and New York has some major weaknesses on defense. They were 3rd in defense last year but this season they are 23rd in the league. Atlanta has signed Lance Stephenson but with so many key players out of this game, it may have a preseason vibe to it.

Prediction: New York hangs on for a close victory, although it won’t be pretty.

Aside from both residing in the Western Conference, the only two things these teams have in common is elite guard play. Luka Doncic and Donovan Mitchell always provide plenty of highlight plays, but Doncic will likely be out after entering protocols on Wednesday. Dallas will have their hands full on the road as Rudy Gobert and Mike Conley are major difference-makers, and their presence will definitely be felt in this one.

The Mavericks will likely be without Doncic, Tim Hardaway Jr, Maxi Kleber, Trey Burke, and Josh Green on Saturday. They might also be missing Kristaps Porzingis, who has been dealing with a sore right toe. Dallas ranks 21st in offense and the Jazz are a great defensive team that also boasts the league’s top-ranked offense. Even when the Mavericks are fully healthy, these two teams seem to be headed in different directions.

Prediction: Utah cruises with a blowout win on their home floor.

The defending champions will be hosting Boston in another Eastern Conference battle. All eyes will be on Giannis Antetokounmpo, as he is nearing a return to action. If the star forward is able to return, the Celtics will try to slow him down using a combination of Jayson Tatum and Jalen Brown, which will be exciting to watch. The Bucks should have Jrue Holiday and Khris Middleton in the lineup, which should give them the edge in this one.

No Bucks have entered or exited the health and safety protocols, Mike Budenholzer confirms.

That means Giannis, Portis, DiVincenzo and Matthews are still in protocol.

“We feel like we’re about to turn the corner,” Bud said about their statuses.

Boston has been fighting just to remain in the playoff picture in the East, while Milwaukee has dropped a few spots playing without the two-time MVP. The Celtics have been especially poor on the road, which doesn’t bode well for their chances of winning on Saturday. With Al Horford in protocols, Boston will definitely need the services of Robert Williams, if he is able to go. Even if Giannis is not able to play, Milwaukee should have enough at home.

Prediction: Milwaukee flexes their muscle and pulls away late in this one.

Imagine how exhilarating this game would be if both teams were completely healthy. That was the thought process when the league scheduled this game, but unfortunately, that will not be the case this Christmas. Brooklyn has had its roster decimated with players in Health and Safety Protocols. This would include their “big three” of Kevin Durant, James Harden, and Kyrie Irving. The Nets have already had multiple games postponed after not having enough available players.

Very quietly, the Nets are back up to #6 in defensive rating, per Cleaning the Glass.

There was a slim chance of Irving playing this game in Los Angeles but he has joined his teammates in protocols. Despite their dire situation, the Nets remain at the top of the Eastern Conference, due in large part to Durant’s incredible season. Los Angeles will have LeBron James and Russell Westbrook, but the third member of their “big three” won’t be available. Anthony Davis remains out with his injured left knee and the Lakers still have several players in protocols. This should still be a competitive contest, but nowhere near what many people envisioned at the start of the season.

Prediction: LeBron dominates early and the Lakers hang on at home to defeat this battered Brooklyn team.

The two best teams in the league will have a rubber match on Christmas, with each team getting a victory on their home floor earlier this month. Their final meeting this season doesn’t come until March 30 so Phoenix will put an emphasis on getting this one in case the playoff seeding in the West comes down to a tiebreaker. The Suns have been rolling right along after their run to the Finals last season.

The Suns have 24 wins this season.

In contrast, they didn’t win more than 24 games in any of Devin Booker’s first four seasons.

Devin Booker has returned to action following his hamstring injury and both Chris Paul and Steph Curry will make this must-see TV on Christmas. Both of these teams rank top-five in offense and top-three in defense. The Warriors will likely still be without Andrew Wiggins, Jordan Poole, and of course Klay Thompson and James Wiseman. Be that as it may, this should still be the best Christmas Day game this year.

Prediction: This will come down to the final few possessions, where Paul tends to shine. The home team gets a big victory in the best game of the day.

In that game where Chamberlain scored 59 points, he also pulled down 36 rebounds, which is one Christmas Day record that may not be broken. In fact, he and Bill Russell hold the five highest rebounding totals for Christmas games. Those numbers will be difficult to beat, but the record for most assists on Christmas Day could fall this year. That number is 18, which is shared by Nate Archibald and Guy Rodgers.