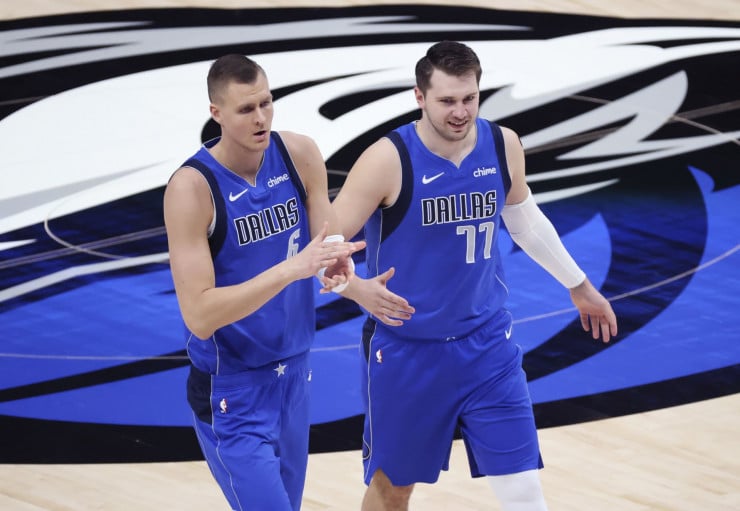 The second half of the NBA season is all about the trade deadline, All-Star weekend, and gearing up for the playoffs. Three weeks from now, any major roster moves will be done and the All-Star festivities will be in the rearview mirror. The race for playoff positioning will be in full swing, with several teams jockeying for home-court advantage, and others trying to avoid the play-in games.

Most of the attention this season has been on the Eastern Conference, and for good reason. Brooklyn’s “big three” has been delivering the drama, the Heat have reloaded, and the Bulls are legitimate title contenders for the first time since Michael Jordan was wearing red. On top of that, there are the defending champion Bucks that have quietly been collecting wins as the season rolls along.

Out West, four teams have separated themselves from the rest of the pack. The Suns and Warriors are arguably the best teams in the league, while the Grizzlies and Jazz continue to give hope to small-market teams around the league. Some teams have been hit harder by the injury bug (and COVID) than others but they all have 82 games on their schedule.

As the games tick away and the playoff picture begins to take shape, there are four teams in the West that have a chance to turn things upside down. What they look like right now and what they look like in April could be vastly different. Several factors will be in play as these teams could potentially shake things up in the wild, wild West.

All of the focus in Los Angeles has been on the Lakers but it is the Clippers that everyone should have their eye on down the stretch. The organization knew going into this season that it was quite possible that Kawhi Leonard would miss the entire year. Paul George was keeping the team afloat, playing at an elite level in the early part of the season. He was carrying the team and making his case as an MVP candidate, but a lingering elbow issue has shut him down.

There is a chance that George may ultimately have to undergo season-ending surgery on that elbow, which would essentially eliminate them as a threat. With an aging roster and a coach known for his many playoff failures, the Clippers could be ready to throw in the towel. There is an outside chance though, that they could have both of their stars back on the floor in time for the postseason.

It may be a long shot, but if Leonard and George are able to play, this could be a particularly dangerous team. Should Los Angeles find themselves in the play-in game, they would be overwhelming favorites to advance and possibly make some noise in the next round. Leonard will likely need to shake off some rust, and George will probably need some conditioning, but the role players around them should be able to carry some of the load until they are ready.

The Clippers have THREE 24+ point comeback wins in the month of January alone.

Without Paul George and Kawhi Leonard.

Let that sink in. pic.twitter.com/tlmXGHgzec

It would be foolish to write this team off right now, especially with time remaining before the trade deadline. The front office could pull off a heist should they be able to pry John Wall out of Houston, or acquire another upgrade at the guard position. Steve Ballmer wants to win badly, and nothing will stand in his way of making this team the best that it can be.

The number one team to watch in the West is Denver, as they try to find their way into the top four by the end of the year. It has been a roller coaster ride for the Nuggets, who seemed to be well on their way to destiny last season before Jamal Murray went down just before the postseason. There was still plenty of optimism heading into this year but another back injury sidelined Michael Porter Jr, who was poised to have a breakout season.

The bad news didn’t stop there, as PJ Dozier also went down with a season-ending injury. Despite all of the unfortunate news, Denver still had the reigning MVP of the league. As great as Nikola Jokic was last season, he has been even better this year. The big man continues to lead the league in triple-doubles and has been carrying this decimated roster all season long. His elite play has this team still in a position to win.

There have been twelve 20/ 20 games in the NBA this season (20 points and 20 rebounds). My man Quentin Richardson calls them Barbara Walters games. Nikola Jokic has 4 of them, all in the last 5 weeks. No one else has more than one.

Denver was part of a recent three-team trade that landed them Bryn Forbes. This gives Jokic another shooter and cutter to facilitate to, and the team also signed DeMarcus Cousins to a 10-day contract. These are clear signs that the team is far from giving up on the season. Denver is not ready to hit the panic button and is instead hoping that they will get both Murray and Porter back before the end of the year.

Jeff Green has been a monster this season, and both Monte Morris and “Bones” Hyland have Denver rolling right along. Seeding for this team is not as important as just having a healthy roster. Much like the situation with the Clippers, the fate of their season rests on the possibility of their two injured stars returning to action in time for the postseason. A healthy Nuggets team will be a scary sight to see for the rest of the conference.

There have been questions surrounding the Trail Blazers since the end of last season, and they all centered around All-NBA guard Damian Lillard. With the direction of the team unclear, many around the league wondered when, not if, Portland would finally part ways with their superstar. The franchise has been adamant about finding a resolution that didn’t involve dealing Lillard or his back court running mate CJ McCollum.

The franchise has been dealing with a lot of drama outside of the Lillard conundrum. With all of the controversy around Neil Olshey, the organization fired the GM and president of basketball operations in early December. Chauncey Billups was also making headlines for all of the wrong reasons as he tried to find his footing as a rookie head coach. The future of the team was already cloudy, but with no leadership present, the only thing that made sense was to just be patient. Portland has had the toughest schedule in the league up to this point.

McCollum has just recently returned to the floor after missing a chunk of time with his lung issue and Lillard is still weeks away from just basic conditioning after his abdominal surgery. With some enticing expiring contracts and some serious holes to fill, Portland needs to act fast in determining what direction they are headed. Staying pat and doing nothing feels like waving the white flag on the season, even after Lillard returns. Still, that may be their only play at this stage of the game.

“The surgeon was telling me, ‘how were you playing with this?’

Damian Lillard on his abdominal injury

“Just to know I’ve handled it and I’m able to move forward with the rest of my career, it brings me a lot of peace”#RipCity | @Dame_Lillard pic.twitter.com/G4JoTgb5Bs

With better play and a lighter schedule ahead, the Blazers still have a decent shot at a shot at the play-in game as they currently sit in 10th place. They could make some minor moves before the trade deadline to improve their odds but the ceiling for this team appears to be a sweep at the hands of the Suns or Warriors. If they do make a deal and this team improves even more after Lillard’s return, a potential date with the Grizzlies or Jazz could become very interesting. Portland is 0-2 in one-possession games and winless in overtime games, but 11 of their last 13 games will be against sub .500 teams.

After a slow start to the season, Dallas has been one of the hottest teams in the league in 2022. The Mavericks are 10-2 since New Year’s Eve and have been playing excellent basketball. Having a healthy and better-conditioned Luka Doncic has been a major factor in their turnaround, as the Slovenian is playing at an All-Star level. His three-point accuracy still needs refining, but his rebounds, assists, blocks, and steals in January are all up from his averages in December.

What good is Batman without his sidekick, Robin? Kristaps Porzingis has also been playing much more efficient basketball in the month of January, improving his three-point percentage from 24 to 35 and his overall shooting from December is up from 45 percent to 51 percent this month. His offensive output and rim-protecting defense are exactly what this organization envisioned when they made the trade for him three years ago this week.

The Mavs have vaulted their way up into the 5th seed and could continue their climb with a light schedule coming up. The next nine games will come against the Blazers, Pacers, Magic, Thunder, 76ers, Hawks, Pistons, and a double-dip with the Clippers. Seven of those nine games will be played in their home arena. They are 15-8 against sub .500 teams and are 15-9 at home this season.

The Mavs have held opponents to below 50% shooting in 23 straight games.

They have won 11 of 13. pic.twitter.com/UrFuKkUSlT

Dallas has always been in pursuit of high-end talent, which is why this team could still make a splash before the February 10 trade deadline. Mark Cuban has been itching to get his team back into championship contention ever since 2011 and this team might be the best-assembled group of talent they have had since then. If the Mavs can swing the right deal at the deadline, they could very well join that top tier in the West.