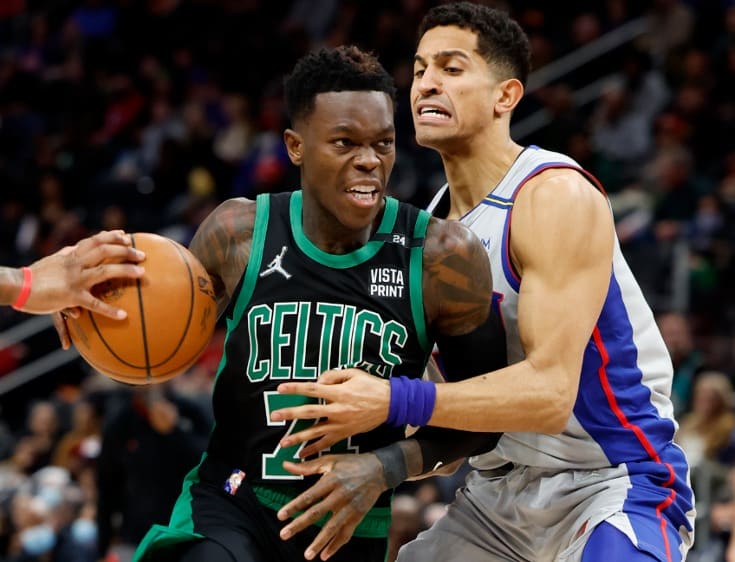 In Wednesday night’s intraconference mismatch, the Detroit Pistons (12-45, 26-31 ATS) are playing the Boston Celtics (34-25, 29-29-1 ATS); NBA picks are available here. Will Jaylen Brown and the Celtics win their 10th consecutive game? In addition to the starting lineups, our top NBA picks and betting trends are posted below.

All Pistons vs Celtics betting odds can be found at BetOnline

Moreover, on Monday, in the Pistons’ 103-94 road loss versus the Wizards, forward Saddiq Bey scored a team-high 24 points in 38 minutes of action. Forward Jerami Grant closed out his outing with 14 points earned in 32 minutes played as well. Detroit has won just one of its past 10 games. With this loss, the team’s losing streak was extended to eight games. Now, the Pistons are 4-25 away, 8-20 at home and 12-17 ATS on the road this season.

Next, in the Celtics’ 135-87 road win over the 76ers on Tuesday, guard Jaylen Brown led his team in scoring. He amassed 29 points in 29 minutes spent on the court. Forward Jayson Tatum ended his performance with another double-double, accumulating 28 points, 12 rebounds and 6.0 assists in 30 minutes played. Boston is on a nine-game winning streak. Counting this blowout victory, the team is 20-10 at home, 14-15 away and 13-16-1 ATS at home.

Per ESPN’s Basketball Power Index, the Celtics have a 89.5% probability of winning.

Referencing other head-to-head matchups, in the previous three matchups, the Celtics are 2-1 against the Pistons. On Feb. 4, 2022, the first time these teams played one another during this regular season, Boston won 102-93 at Little Caesars Arena. The Pistons last defeated them on Feb. 12, 2021, when they won 108-102 at TD Garden.

After the Celtics defeated the 76ers on Tuesday night, Jaylen Brown told reporters, “This is a game we all talked about; we wanted this one.” Brown’s outing did not disappoint. At this point of the regular season, the sixth-year player is averaging 23.6 points, 6.6 rebounds and 3.2 assists per game.

Jaylen Brown: “This is a game we all talked about…We wanted this one.”

Heading into tonight’s rematch, the C’s are heavy 13-point favorites at home. Boston should have no problem beating Detroit. However, the Pistons are capable of defeating a playoff opponent on any given day. For example, they upsetted the Cavaliers last month. All things considered, pick the Celtics to win, they will cover the spread and the total will go under 216. If you are new to sports betting, skim through our handicap betting guide. Other NBA Picks are on the main page.